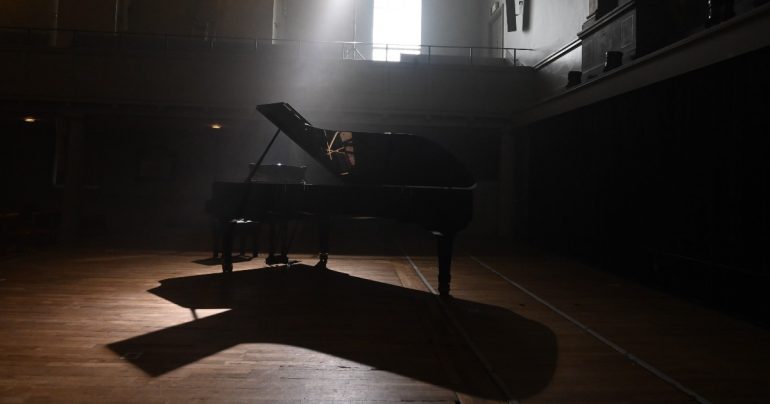 It is unlikely that anyone would have ever heard of Tick, Tick…Boom! if it weren’t for the later success of another Broadway production. A forgotten triumph of theatre, Jonathan Larson’s semi-autobiographical musical was produced for off-Broadway after Larson posthumously achieved widespread recognition for Rent. Interest in the show was renewed last year following the release of a movie adaptation on Netflix. With a name like *whispers intensely* Lin-Manuel Miranda attached to the movie, any production nowadays would have to contend with immense audience expectations.

Amongst the Oxford theatre scene’s onslaught of springtime garden plays, Half Rhyme Productions dared to dramatize Larson’s original musical, helmed by director Felix Westcott and musical director Adam Najmudin Hall. This production’s talented cast and exceptional music and choreography filled up the Michael Pilch Studio – the perfect setting for a show which concentrates upon the innermost hopes and fears of a small cast. The audience got the chance to be a part of the characters’ journeys in New York at the beginning of the 1990s (which is also the setting for Rent).

Tick, Tick…Boom! focuses on Jon as he struggles to make a name for himself as a writer and composer of musical theatre. With his 30th birthday just a week away, Jon is worried that time is running out for him to make his mark. As played by Dawson Holder, he’s neurotic and fixated, yet passionate. While his opening monologue felt a little superficial, once the music started Holder quickly fell into character like it was a routine. From speaking with exaggerated sarcasm about his friend’s corporate career to whispering Stephen Sondheim’s name like it is sacrilege to say it aloud,

Peter Todd also starred as Jon’s best friend Michael, a former actor who left behind the struggling artist lifestyle for a lucrative marketing career. I’ll never understand how Todd can have been in so many musicals this year (Persephone, Carrie, Sweeney Todd) and bring the same dedication to each role. This show gave Todd a chance to exercise his talents with a more reflective character in a more intimate setting and he effectively portrayed Michael’s struggles and sometimes despair. The scene where Michael tells Jon he is HIV-positive was heartbreaking; both actors looked like they were struggling not to cry and played off each other with crippling emotion throughout the scene.

The final member of the three-person cast was Bethan Draycott as Jon’s girlfriend Susan. Besides a few solos to show off her vocal talent, the script didn’t give Draycott a lot to do with Susan and she came across as a generic girlfriend figure; her more memorable moments were when she doubled up as other characters. One of the best numbers in the show was “Sugar,” in which Jon, Karessa (the bubbly star of Jon’s workshop musical, played by Draycott), and the counter boy in the grocery store (played by Todd) participate in a rock musical celebration of sugary snacks. The actors were hilarious in this scene with their enthusiasm, but in a way that made you feel like they were being completely serious (we all know how important snacks are during exams), and the song gave Draycott the chance to play a much more entertaining character.

All three actors were also able to interact with the audience on occasion, making the show funny and intimate.

This trio worked well together, but because the cast is only these three people it falls on the actors playing Michael and Susan to play the other various characters in Jon’s narrative. Most of these characters are written to be very satiric and melodramatic, just to establish that they are different people. Todd and Draycott got some genuine laughs out of the audience when playing Jon’s agent Rosa, Jon’s father, and Karessa. All three actors were also able to interact with the audience on occasion, making the show funny and intimate. The script calls for Jon to narrate the show with several monologues in which he breaks the fourth wall and speaks to the audience. In this production, the other characters would often look straight into the audience as if they were not there without breaking character (such as when Michael is looking into a “mirror” while admiring a new Gucci belt or the diner patrons are miming eating).

One thing that anyone who has seen the movie will expect is explosive intensity behind the musical numbers. All the technical aspects of the show helped to create this – including amazing blocking, flashing lights, and a brilliant live band – so the actors could just step in and start singing and the whole thing would come together. The choreography was particularly spectacular; Tiggy Jones created momentous musical numbers which use the space well. For example, the number “Therapy,” where Jon and Susan try to discuss their relationship over the phone involved Holder and Draycott getting tangled up in telephone cords (the people sitting next to me were laughing hysterically).

The choice to do a production of Tick, Tick…Boom! just months after the release of the movie meant more hype for the show, but also towering expectations, especially since it comes from the same mind which brought us Rent. Getting to see the show in its original format, brought to life by an expectational cast and crew, was an enlightening experience, and reminded me that this was not written by someone who ever expected himself to be played by an Oscar-nominated actor. Tick, Tick…Boom! is a beautiful, personal story which reveals a hidden story behind Rent and shows the struggles of a young artist and how his life will become his greatest success.

Featured image description: a piano in a dark room