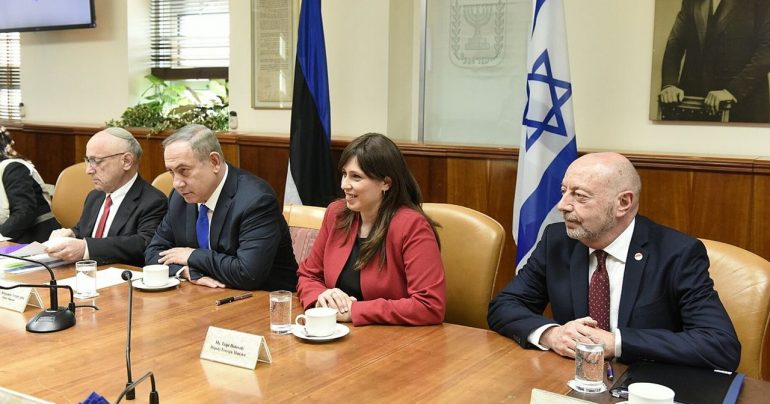 The Oxford Union announced on Wednesday evening an event featuring Tzipi Hotovely, the Israeli ambassador to the UK since 2020. Hotovely is further known for highly controversial views about Palestinians and about Israel’s claims to the West Bank. Prominent members and parts of the British Jewish community have also spoken out against Hotovely’s appointment, including the organisation Na’amod: British Jews Against Occupation.

Hotovely has previously appeared before the Cambridge Union in February and the LSE in November. Students and other protesters organised large demonstrations at both events, with the latter event ending in Hotovely being escorted to her car by security.

Members of the student body at Oxford have similarly expressed opposition against Tzipi’s appearance. The Oxford Students’ Palestine Society further plans to organise a protest outside the Oxford Union: “We are calling on everyone to join us outside the Union at 5pm to show Hotovely that she and the Apartheid regime she represents are not welcome in our city. Please join us to stand in solidarity with the Palestinian people.”

The statement given for the protest also criticised Hotovely’s political track record: “Hotovely makes no secret of her racism: [she] has repeatedly called for the annexation of all Palestinian land, pushed for the expansion of racially segregated settlements and incited violent attacks against Palestinians, claiming they are ‘thieves of history.’ She describes the Nakba of 1948, during which 750,000 Palestinians were forcibly displaced from their homes, as an ‘Arab lie.’

“Hotovely has asserted that the entire West Bank belongs to Israelis alone: ‘This land is ours. All of it is ours. We did not come here to apologise for that.’ She also supports the extreme fascist group the Lehava, and has claimed that it is important to ‘prevent mixed [Arab and Jewish] marriages.’ She makes no secret of her attempts to erase the history and the very existence of the Palestinian people.”

Hotovely has repeatedly asserted that the entirety of the West Bank belongs to Israel. She has also been criticised for directing racist insults at Arab members of the Knesset (the Israeli legislative assembly), calling them ‘thieves of history:’ “the Palestinians don’t have kings and they don’t have heritage sites”. Hotovely further denied the occurrence of the Nakba, the forced and often violent displacement of Palestinians after the founding of Israel, in a 2020 speech hosted by the Board of Deputies of British Jews. Israel has vehemently denied any blame for this displacement, claiming instead that displacement and violence were either spontaneous or mutual and the result of war.

As the above students’ statement cites, Hotovely has also expressed disdain for intermarriage between Jewish women and Arab men. She told a hearing of the Knesset Committee for the Advancement of Women: “We must confront the fact that the country has not valued education, which is the only way to prevent Jewish women from forging life connections with non-Jews,”

Amnesty UK has recently labelled Israel an ‘apartheid state,’ citing unlawful killing of protesters, segregationalist policies, dispossession, and other human rights abuses. Israel has deemed such accusations antisemitic, accusing Amnesty of UK of using ‘double standards.’ However, this view is not by the wider Jewish community. Jewish Students Against Antisemitism recently released a statement as to why criticism of Israel should not be conflated with antisemitism.

The Oxford Union also provided comment on this matter: “The Oxford Union is proud to be a bastion of free speech since its inception in 1823. Just as we hosted the Palestinian Ambassador last Michaelmas, and the Saudi Ambassador in Hilary, we are glad to provide our members an opportunity to question and challenge the Israeli Ambassador during her visit here, as they did during those visits from other ambassadors of the GCC [Gulf Cooperation Council].”

The “Oxford for Palestine / No to Tzipi Hotovely” Protest will take place at 5PM in front of the Union.