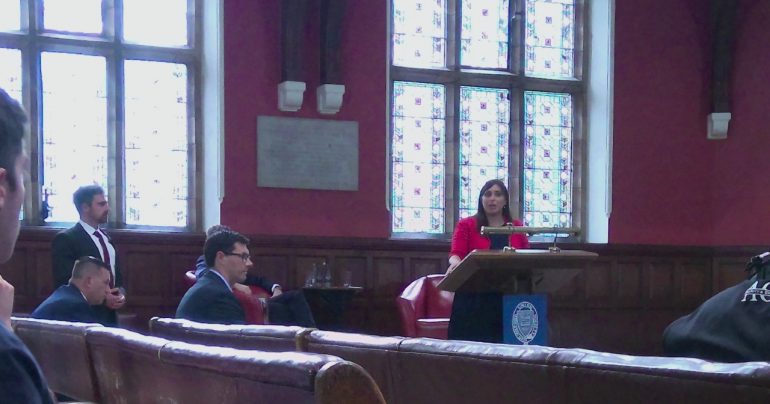 Israel’s Ambassador to the UK, Tzipi Hotovely, spoke to the Oxford Union on ‘a New Middle East’ this evening in a last-minute event that faced serious backlash. Hotovely has been criticised for highly controversial statements about Palestine and Palestinians, and her previous appearances at the Cambridge Union and the LSE each faced intense opposition from protesters. Dozens of protesters gathered outside the Oxford Union today to oppose Hotovely’s appearance.

As Palestinian flags waved outside, Hotovely began her speech. She focused on the Middle East’s growing acceptance of Israel as an important economic and political partner: “Increasingly, countries in the Middle East are realising that without having serious cooperation with Israel, the challenges of today cannot be addressed.”

Despite touching on issues as varied as climate, democracy, education, and women’s rights, the Israeli Ambassador devoted much of her time to addressing Israel-Palestine relations. As the chants of “Shame on you” from protesters outside the chamber rose in intensity, Hotovely criticised their slogans: “One of the reasons there is no peace between Israelis and Palestinians is because of the words that are being chanted outside. It’s okay to demonstrate, but listen to the words. They are saying, ‘from the river to the sea, Palestine will be free’. Does that leave any space for Israel to exist? The meaning of what they are chanting out there is ‘Israel shouldn’t exist.’ They’re not promoting peace. They’re actually distancing peace.”

Gesturing towards the protesters outside, Hotovely continued, ““In the last month, 19 Israelis were brutally killed by palestinian terrorists that were incited by those kinds of things.” Hotovely references here a recent wave of what Israel pundits have deemed a ‘terror wave’ that left 19 Israelis killed, and spurned calls for further assassination of Hamas leadership.

Hotovely also responded to questions from both the Union and the audience. Responding to questions asked by the Union, Hotovely took an adamant stance that Iran posed a great threat to Middle Eastern Peace, that Israeli settlements were not a barrier to peace, and that Hamas was responsible for Palestinian suffering. Though the ambassador did not speak about her history of what she deemed ‘personal’ opinions against Palestinians, she placed blame for obstructing peace in the region squarely on Palestine: “Israel and Palestine have been fighting for a hundred years. We are making tremendous efforts to work on peace from bottom to top. One of the tragedies is that many people who think they are trying to promote peace are instead promoting segregation…. Almost anytime in history the conversation between Israelis and Palestine failed, it was because the Palestinians left the table.”

The Ambassador later faced off against students who were heavily critical off her and the government she represented. One student questioned whether it was hypocritical of Israel’s government to criticise Hamas: “You mentioned Hamas regularly kills Israeli civilians. So does Israel. Israel regularly fires into Gaza. So what’s the difference between a terror organisation and a government?”

Hotovely responded, “Terrorism is when you use your force in order to intimidate innocent people. Israel never targets civilians. This is the truth. Israel uses force only to attack terror targets. We never target innocent people. We never target civilians.” In a 2021 Report, the UN Office for the Coordination of Humanitarian Affairs (OCHA) reported that between 10-21 May 2021, Israeli attacks in Gaza killed at least 129 civilians, including 66 children. A recent report by ReliefWeb, a service of the OCHA, found that Israel “killed five times as many Palestinians in 2022 than it killed in the same period in 2021.”

Israel has further been criticised for what many international and western experts have found to be a ‘targetted’ attack in May that saw Palestinian journalist Shireen Abu Akleh fatally shot in the head by Israeli forces. Another student focused on this recent controversy, accusing Hotovely of upholding a ‘genocidal’ state: “You speak of human rights. Where was ‘human rights’ when Palestinian journalist Shereen Abu Akleh was killed by an Israeli bullet?”

Hotovely’s response echoed Israel’s previous statements: “I want to start with sympathy for the journalist that was killed in the crossfire. As we speak, no one knows where the bullet came from that killed Shireen Abu Akleh. We don’t know who shot Shireen Abu Akleh. We can’t blame the Israelis. But we need to ask the question, why do Palestinians refuse to have a joint investigation? We need to understand why IDF was acting in Jenin. IDF was going to go to a massive terror nest in Jenin. This terror nest is responsible for the brutal murder of 19 Israelis in the streets. I think this is the big tragedy, that you only tell one side of the story.” Subsequent evidence which has emerged of the incident shows journalists being shot at in spite of their press vests and without being asked to leave first, while CNN video evidence found “no active combat, nor any Palestinian militants, near Abu Akleh in the moments leading up to her death”.