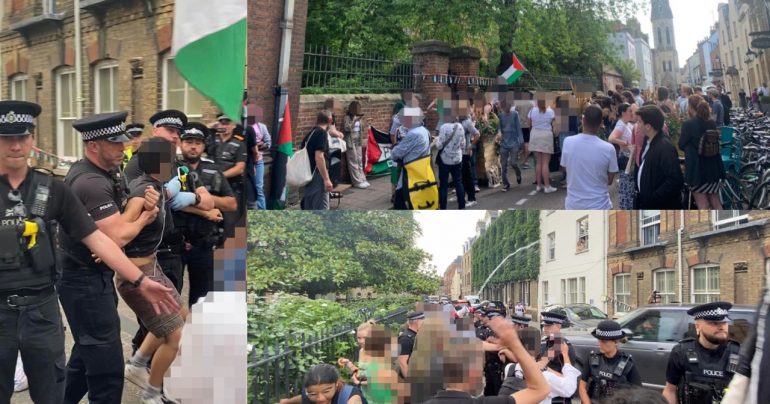 Dozens of protesters gathered this afternoon outside the Oxford Union’s event hosting Tzipi Hotovely, the Israeli Ambassador to the UK. Chants of ‘Genocide in slow motion,’ and ‘Oxford Union shame on you’ could be heard throughout the event, even from inside the Union Chamber. The event saw high tensions as a student protester was forcibly removed by police, and protesters were subject to what they described as ‘intimidation’ by Hotovely’s security detail.

One student and member of the Oxford Students’ Palestine Society told the Oxford Student: “I think it’s quite frankly an insult for an institution to host this mouthpiece of Israeli propaganda. Every institution is free to do what they want. However, to give such a short notice on such an important topic for people not to be prepared is disgraceful.” The Union announced this event yesterday evening, and the regular termcard did not reference Hotovely’s appearance.

The student went on: “To see the Union giving a platform to a person who is here not to debate, but to spread propaganda, is quite frankly disgusting. It’s our responsibility, not only as people who support the Palestinian cause, but as people who support human rights and justice overall, to stand in solidarity with the Palestinian people and protest here, and make sure that people who come into the union to attend this talk are informed. And that Hotovely know that wherever she goes, whether it’s Cambridge, whether it’s LSE, whether it’s Oxford, she will always face stern resistance.” Students handed out flyers to attendees of the event with a list of questions to ask Hotovely, including about her track record of supporting Israeli settlements in the West Bank, denial of the Nakba, and opposition to intermarriage between Jewish women and Arab men.

Attendees also criticised the Oxford Union’s justification that they were “glad to provide our members an opportunity to question and challenge the Israeli Ambassador during her visit here”. One protester, who was not a member of the Oxford student body, told the Oxford Student, “There are limits on having platforms…would they invite a fascist dictator to speak? I think that Israel is so adept with its propaganda that I think it was a mistake for them to invite her.” Another student corroborated this opinion, saying that The Oxford Union is “well within their right to host these people…but you wouldn’t see them host, for example, the Syrian ambassador of the Assad regime. Importantly, this person is not here to debate with anyone, this person is here

only to spread Israeli propaganda.”

After the event with Hotovely ended, protesters gathered outside the rear gate of the Oxford Union, where the ambassador’s car was ready to leave. Here, the police presence quadrupled, as dozens of officers ushered protesters away from the rear gate.

One student, another member of the Palestine Society, was sitting in front of the gate when Police forcibly removed them. They recounted to the Oxford Student: “I had my earphones in so I couldn’t hear their orders. I sat down because they were really in my face and I was just listening to music.” Two officers then grabbed the protester by the arms and dragged them away from the gate. “They grabbed me without my consent and held me very tightly and wouldn’t let go.”

Protesters continued shouting as Hotovely’s Range Rover sped out of the premises. Both slogans and water were hurled at Hotovely’s two-car motorcade as they left.

These students, as well as multiple bystanders attending, also testified that Hotovely’s security filmed the Union members that were asking to be let in. The Oxford Student asked one student who was filmed if they believe the security taking photos of you threatened and continues to threaten their safety, to which the student responded, “Yes, especially given the fact that i have friends and family in Palestine.” Israel has been criticised for what some deem widespread racial profiling in the name of security, and pundits and activists have long been concerned about the surveillance capabilities of Israel. The Oxford Union has been contacted for comment about the treatment of protesters at today’s protest. You can read their statement on the invitation to Hotovely here.

Certain parts of images have been blurred to protect the identity of protesters.