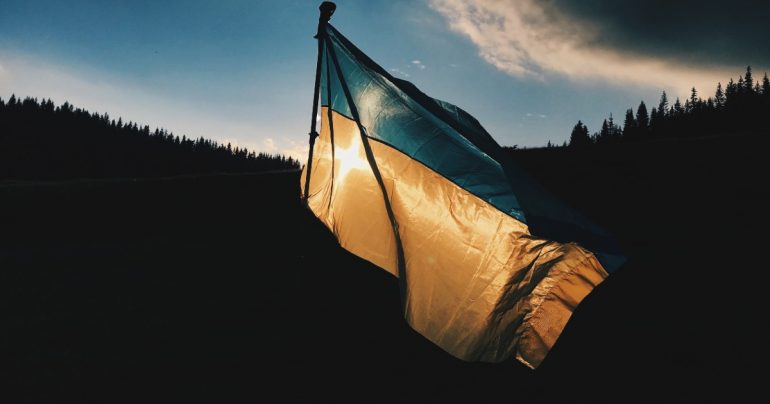 Blowing Up Ukraine by Yuri Felshtinsky and Michael Stanchev review: an urgent warning for us all

We are not yet afraid, but this book speaks of war. Flinging before us a panoramic view of Ukraine and its history – perhaps our history – co-authors Yuri Felshtinsky and Michael Stanchev deliver an incisive account of the leadup to the Russo-Ukrainian war, with a timely warning about its global consequences.

The emphasis is on how history may repeat itself in the face of Western inaction. Compelling parallels are drawn between the actions of Hitler and Stalin in the 1930s with that of Putin today – their rapacious greed, shrewd political judgements, and cruel indifference to people’s deaths, especially those deemed ethnically inferior. The ‘fascism’ falsely accused of Ukraine is shown to be more apt for Putin’s government, which fetishizes its imperial past (fictional and otherwise) in ways that seem ludicrously outdated. Angela Merkel’s remark in 2014, after the Russian annexation of Crimea, that Putin was ‘living in another world’, is investigated with due depth; like Merkel, the book is keen to stress Putin’s inexorable sanity. His ambitions are kept in the foreground as details of Russian interference in Ukraine are traced over the years to their appalling extent. As the writers note, Putin is ‘preparing for the hundred-year anniversary’ of the world wars ‘by starting the Third World War’.

Putin is ‘preparing for the hundred-year anniversary’ of the world wars ‘by starting the Third World War’.

This is a frightening assertion to make, but Yuri Felshtinsky (author of Blowing Up Russia: The Return of the KGB with Alexander Livtinenko) and Michael Stanchev (expert in Ukrainian diplomatic history) follow through. Over an impressive series of sources and analyses, they expose the steaks upon which the brutal game of power has already been played. There have been killings sanctioned from the highest levels of government, as with former Ukrainian president Kuchma’s involvement in the murder of journalist Georgiy Gongadze. There has been deep-seated corruption, especially during Yanukovych’s regime, which allowed Russia to exploit the self-interest of Ukrainian oligarchs by manipulating the gas sector, in manoeuvres involving millions and billions of dollars. Russian operatives were also responsible for the sniper attack on peaceful Maidan protestors in 2014, which killed around a hundred civilians. The failure of the West to even interrogate Putin on his role in the massacre is highlighted as ‘one of the most costly mistakes in foreign affairs made in the twenty-first century’. In other words, there is no turning back.

It may be that in this disillusioned age, corruption and scandal no longer surprise us as they should. In reading about Gongadze, the journalist killed in September 2000 after attempting to publicise his findings on government corruption, we may be reminded of the more recent murders of Daphne Caruana Galizia and Jamal Khashoggi. But the urgency and importance of earlier events in Ukraine lies in what they suggest about the war today. Old problems and tensions accumulate, then explode. It’s a credit to the authors that much of this complicated and often convoluted history is invested with such clear-sighted logic, presented in attractively simple terms which tie into the wider argument – the writers make it clear that the biggest, perhaps even nuclear, explosion is on the horizon.

… the writers make it clear that the biggest, perhaps even nuclear, explosion is on the horizon.

Still, not all of this is grim: the book vividly portrays the bravery of Ukrainians in the Orange Revolution, and again in the EuroMaidan protests, arguably anticipating the courage of the Ukrainian resistance against Russia (though oddly little is told about the current president Volodymyr Zelensky). Former prime minister Yulia Timoshenko in particular emerges as an intriguingly complex political character in the course of the book, the so-called ‘Orange princess’ of the revolution, but also an ambitious career woman, corrupt oligarch, and victim of political persecution. She is often semi-ironically referred to as ‘Lady Y.’, suggesting the mixture of admiration and distrust with which the writers regard Timoshenko – a symbol of disappointed ideals. Nevertheless, against a background of scrabbling men willing to cringe before Putin, she appears as a comparatively admirable figure of some integrity.

These historians also key into the absurd moments in history, often in relation to the obviously inadequate response of Western nations. In one of these illustrative anecdotes, we are told how a senior US state department official, Victoria Nuland, appeared in Kyiv amidst the political turmoil to hand out bread and cookies, ‘which looked very comical’, the book dryly notes that ‘it looked very comical’ since the protestors ‘[already] had plenty’. More seriously however, the authors point out how Ukraine has essentially been funding its own invasion, having paid $786 million in a futile effort to settle its debt with Russia, precious money which could have been used to protect its people.

The big, overarching irony of course is that, in a sense, this has all happened before. This punitive approach to Ukraine, forcing it to pay a debt which (on an ethical level) Russia hardly deserved to receive, echoes Stalin’s exacting of tributes from Spain, supposedly in payment for the USSR’s expenditures on the Spanish Civil War. But it is the similarities between Putin and Hitler upon which the writers place the most weight. Historian Christopher Clark has recently dismissed such parallels, noting that ‘Hitler had a profoundly racist philosophy’ (arguing that Putin does not), and ‘a better analogy would be with the opportunist Russian predations of the 19th century’. Yet, although Putin’s imperial outlook certainly resembles that of another age, it is worth noting how he weaponizes latent prejudices to achieve political ends. As the book observes, the ‘Russian Spring’ in south-eastern Ukraine, 2014, began as a movement calling for the defence of the Russian language and the Russian-speaking population – and, though such views had been bolstered by Russian propaganda, this ‘defence’ later became Putin’s alleged reason to invade, much as Hitler justified his invasion of Poland as an effort to protect ethnic Germans. Putin’s attitude to race may be too pragmatic and adaptable to be called a ‘philosophy’, but in highlighting the lessons that may be learnt from past wars, Felshtinsky and Stanchev demonstrate Putin as being far from purely opportunist – Ukraine has long been his aim. Even as the threat of global warfare feels palpably more real, it can be reassuring to rationalise using historical symmetries. But, as the writers argue, we can only remain detached for so long.

… we risk stumbling into a world where imperial aggression and the killing of ordinary civilians become normalised and accepted.

So history reverberates into today, and Ukraine’s into ours. Putin follows in the ‘blood-soaked footsteps’ of Hitler and Stalin; we risk stumbling into a world where imperial aggression and the killing of ordinary civilians become normalised and accepted. The authors call for severe economic sanctions until Russia gives up on capturing Ukraine, even if this means hurting the European economy, for the latter is less terrible than world war. Perhaps such parallels seem too simple, yet even the shadow of them is worth regarding.

To read Blowing Up Ukraine is to discover the danger upon which we hang, realise it is a time to be afraid, but also a time to fight – with an eye to the future.