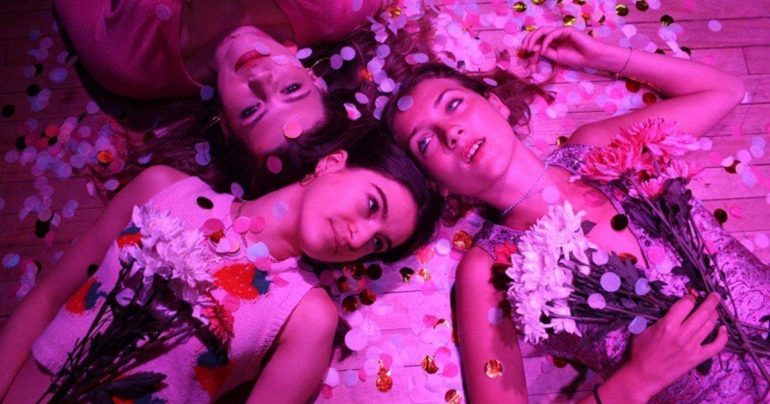 Miriam Battye’s Scenes with Girls is a bright and shiny new play, first performed in 2020. This freshness is palpable throughout the production. The dialogues between the central characters, Lou (Rosa Calcraft) and Tosh (Millie Deere), capture the rhythms of a generation in a way not often seen on stage or screen. With this sharply contemporary feel, and as a play about women just fractionally older than most undergraduates, Scenes with Girls can feel almost too resonant – perhaps even an uncomfortable viewing for an audience of young women who will see themselves in each of the three characters, reflected in a less than flattering light. The women in Scenes with Girls are complex in a way that is so believable, it renders them deeply sympathetic whilst at times painful to watch.

The opening few scenes of the play are short and frothily light-hearted, letting the audience into the in-jokes and mantras of Lou and Tosh as they discuss men and sex. If at first the pair appear completely in sync, it becomes clear that Tosh has become irritated by Lou’s fixation on sexual relationships, and the play goes on to track this issue as it threatens to overwhelm their intimate bond. These short and punchy early scenes are interspersed by a clip from Lorde’s song ‘Ribs’: “You’re the only friend I need / Share a bed like little kids”. This soundbite becomes ironic as the play progresses; the laughter in the background of the song at first mimics the laughter between the characters onstage, yet seems suddenly dissonant as their relationship sours.

Such a repetitive refrain between short scenes could easily become stilted or clunky if not approached with the right energy, but the cast manages to avoid this and works to retain a natural dynamism. Scenes with Girls really gets into its stride as the scenes get longer and the characters more complex. So much of this production’s strength stems from superb performances by a small cast who fully understand their characters and the tense and intense relationships which bind them to each other. Rosa Calcraft and Millie Deere move seamlessly from humour and affection to scenes fraught with claustrophobic resentment and simmering bitterness, all thrown into relief by the clumsy intrusions of the well-meaning and happily coupled Fran, played to comic perfection by Cecily Brem.

A review of this production would be incomplete without a word in praise of its set and costume design. A far cry from the bare-bones set of the play’s first performance at the Royal Court, Love Song Productions cram their set with every shade of pink under the sun. Lou and Tosh navigate their chaotic friendship from fluffy pink beanbags amid overcrowded coffee tables brimming with mugs, flowers, books, lamps, and candles. Fran’s neutral costume marks her out as an outsider in a strikingly visual way – she appears immediately ill at ease in Lou and Tosh’s private universe. While overwhelmingly pink, the Scenes with Girls design includes touches of blue, a colour scheme which plays on the play’s exploration of gender politics, hinting at the endurance of the traditional gender categories Lou and Tosh are so confident they are escaping. As Lou’s approach to sexual politics begins to fall apart, the pink female nude which sits on an easel upstage also provides a site of tension – is it a feminist reclamation of sexuality or a reductionist, even traditional objectification?

It is clear, however, that the pink which pervades this production is not just a troubling presence, but also a genuine celebration of femininity. As the play unpacks Lou and Tosh’s fixation on men, it remains resolutely women-focused. This is never so clear as in the cameo role of ‘a boy’. This part, credited in the show programme only with an ‘?’, is unnamed and has only one line in the whole show. The production casted this part ingeniously by vote. Hilarious mock Tinder profiles on the @lovesongprods Instagram page advertise a range of actors for this part. Audience members swiped through said profiles and were polled, with the winning two boys earning the role. As well as being an incredibly fun and inventive instance of audience participation, this method of casting pushes the side-lining of ‘a boy’ to its absolute limit and makes a clear statement about this production as an exploration of female experience for its own sake.

With its striking set design, fierce performances and fresh contemporary script, Scenes with Girls carries with it a strong resonance. It is full of powerful lines powerfully delivered – enough to send any audience member spiralling. But then, that is just what this exploration of modern feminist politics, dating rituals and friendship sets out to do:

I mean, is there any answer to that?