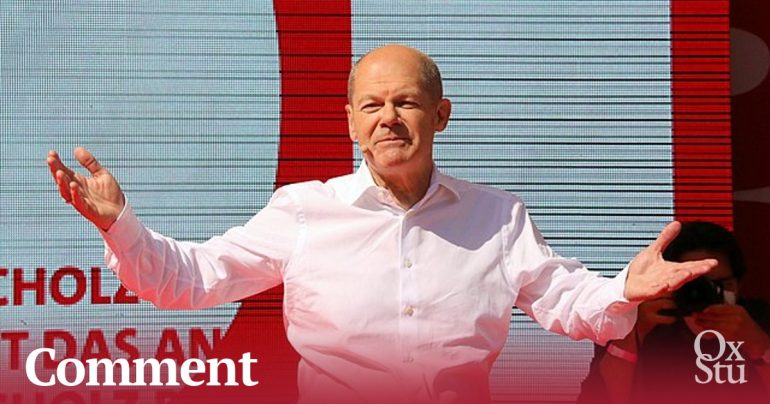 In Defence of Olaf Scholz

The 2021 German Federal Elections produced a unique situation for post-war German politics: the lowest percentage for the largest party in an election in the post-war era, with the SPD receiving just 25.7% of the popular vote. On top of this, a turnout of 76.6% was also the second lowest in the post-war era, with the lowest coming in 2017. For those aware of how German politics works and who know about modern German history, this was a symbol of the massive challenges which were presented to whoever would be the victor of this election, and of the apathy which has begun to rise in Germany. After two months of difficult coalition negotiations, in which a grand coalition with the CDU/CSU was ruled out, the traffic light coalition was born, with the FDP and Greens participating in Olaf Scholz’s Government. The challenges which face Germany would be considered extreme even in a situation where the ruling party had a larger share of the Bundestag, but in a situation where a coalition composed of members on the hardline of both the pro- and anti-NordStream2 spectrum, governing in a time of a cost of living crisis, recession, environmental emergency, and a war in Europe involving Russia was never going to be simple.

History has shown that rarely is the safe, experienced politician the preferred candidate in an election, and had the last German election been held after the invasion in Ukraine then maybe the result would have been even more extraordinary. It is lucky that Scholz came up against a CDU leader unable to establish himself after the end of the Merkel era, which died a million deaths with endless scandals and failures. Despite history’s hatred of the safe politician, it is possibly the exact thing which Germany needs in its time of crisis; someone to bring people together, to reassure them, and to carry ahead steadfast with their solutions. Had maybe a more populist leader won in Germany, it would not be inconceivable that rather than sacrificing the comfort of its citizens and turning off lights at public displays in order to grant more support to Ukraine in the form of tanks, another leader would have abandoned a moralist international stance in favour instead for a more national focus.

Despite strong pressure from the other parties in his coalition, Scholz has “danced on the edge of a volcano”, as Gustav Stresemann might have said of the current situation. While granting support for Ukraine and increasing its defence spending which had been at historically low levels before the invasion, Germany has also continued to import gas from Russia through NordStream1 despite the criticism that Scholz has received as a result. One could see this as biding time in order to phase out a dependence on Russian gas and avoid an emergency situation where the taps are turned off completely overnight. On top of this, Scholz became one of the first global leaders to impose sanctions on Russia when he cancelled NordStream2 in February 2022, despite the fact that it antagonised the Russian leadership. Scholz recognised that while Germany may be currently dependent on Russian gas, the Russian economy was also dependent in part on selling that gas which has contributed to a massive strangulation in their economic means to wage war.

History, I feel, will treat Scholz kindly for the position he has taken on this grave emergency, sacrificing everything for their morals and their defence of the national sovereignty of European countries in the face of despotism and tyranny. This position certainly hasn’t won him many friends, not among political commentators, nor the opposition in Germany, nor in Russia, and certainly not in Scholz’s own cabinet. But whenever this conflict ends, and whenever the global economy emerges from the crisis which it has descended into, we should recognise the contribution which Germany has given to it. We should also recognise the unique difficulty of the situation which Scholz has found himself in, with a unique lack of legitimacy over his own Government and a tyrant holding his country’s weaknesses up to him like a mirror.