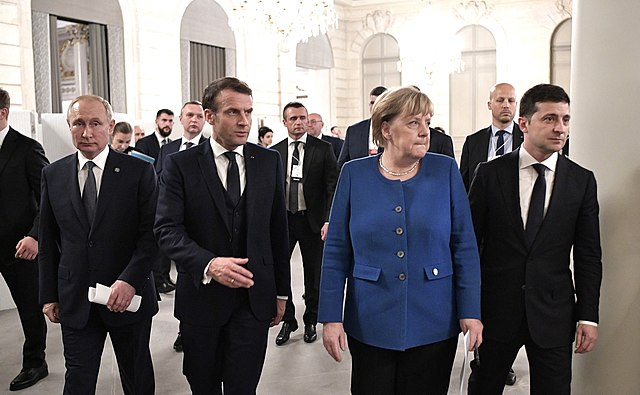 Did Putin Save the Liberal World Order?

If you were a liberal thinking about the ‘liberal world order’ back in 2019, you could have been forgiven for being quite worried.

A cynic may have recycled Voltaire’s quip on the Holy Roman Empire that it was ‘neither holy, nor Roman, nor an empire’ and asked ‘What Liberalism? What World order?’ Yet up until that point in time, you could have confidently replied that a distinctly rules-based world order had been established after the Second World War, which was underpinned by international institutions which seek to prevent the horrors of the early 20th century. A former UN General-Secretary, Dag Hammarskjöld, once said of United Nations that it was “not created to take mankind to heaven, but to save humanity from hell” which perfectly captures the rationale behind the liberal world order.

Yet by 2019, those post World War II institutions like NATO or the European Union seemed to be under attack or in retreat. Donald Trump, at that point still in the White House, seemed to have no love lost for NATO or America’s other engagements around the world, seeing them not as prices for being the world’s hegemon but as examples of ‘America being ripped off’. The European Union, having just survived an economic crisis in the eurozone, and still grappling with a migration crisis, was by 2019 in the process of losing the second largest contributor to its budget after Britain’s vote to leave.

Donald Trump… seemed to have no love lost for NATO or America’s other engagements around the world, seeing them not as prices for being the world’s hegemon but as examples of ‘America being ripped off’.

In July 2019, Vladimir Putin felt bold enough to tell Financial Times readers that ‘Liberalism is becoming obsolete’, whilst being gleeful about a wave of national populist backlash. Looking across to the United States, he could see a President and the governing Republican party which far from its tradition of antagonism towards Russia had softened its rhetoric to talk of détente. Later in the year, France’s President Macron shocked The Economist‘s liberal audience by describing NATO as ‘brain dead’, perhaps attempting to echo Charles de Gaulle whose ghost still overshadows French politics.

With these snapshots placed together, you could view 2019 as a so-called ‘post-liberal’ moment where liberal economics had remained discredited since 2008. Free-trade was replaced by a trade war between US and China, and social liberalism seemed to experience a populist backlash across the western world.

Fast forward to August 2021, following the United States’ chaotic withdrawal from Afghanistan, Joe Biden declared in a televised address that “Americans should not fight in wars other people wouldn’t fight for themselves”. That remark signaled the beginning of the end of America’s post World War II role as the custodian of the liberal world order. It was a role which at times involved what may have appeared to American isolationists like Joe Biden as ‘fighting other people’s wars’. America’s allies and liberal internationalists around the world may have wondered: so much for ‘America is back?!’.

Yet with the tragic invasion of Ukraine by the Russian Federation in February 2022, Western leaders were presented with a clear and dangerous threat to the values and institutions they had perhaps taken for granted. Having lacked strategic coherence since the end of the cold war and having missed a common cause to unite around, the United States and her allies found themselves having to unite and focus. Russia’s invasion changed Germany’s foreign policy almost overnight from (effectively) pacificism to pledging to spend billions of euros on national defense. This marked an extraordinary turning point. For years, many NATO member states had spent below the 2% of GDP requirement. That will change.

That remark signaled the beginning of the end of America’s post World War II role as the custodian of the liberal world order.

In retrospect, it seems at best extraordinarily naive if not reckless that France and Germany’s policy towards Russia was one of Rapprochement, even after the annexation of Crimea in 2014 and despite EU sanctions. Even worse, Germany planned to go ahead with the Nord Stream 2 gas pipeline, having inaugurated Nord Stream 1 in 2011 thus further appeasing Putin’s expansionism. Having subsequently phased out its nuclear power in the same year Germany became heavily reliant on Russia for energy and now faces a difficult winter ahead. Like other European leaders, Olaf Scholz, now faces the task of reminding Europeans what is at stake and what sacrifices may be required in the coming months.

The European Union having set out a timetable for transitioning away from Russian gas by late 2022 and early 2023 deserves some credit. Whilst NATO received application from Sweden and Finland for accession. For these hopefuls NATO does not spell ‘No Action Talk Only’, despite an old French joke, but as an insurance policy against Russian intimidation. If Vladimir Putin wanted a smaller NATO, he has now helped to recruit two new members, albeit inadvertently.

Putin’s latest assault on the liberal world order with the invasion of Ukraine has clearly highlighted why such an order emerged in the first place and what the world may look like without it. His international campaign against liberalism has in fact injected moral clarity to the liberal project which may have been lacked since the fall of the Soviet Union. The Ukrainian people in their bravery have shown the world that there are still principles worth fighting and making sacrifices for. They have clearly shown that despite talk of a post-national hyper-globalised world, the nation-state, national sovereignty, and self-determination remain relevant. That freedom matters and it isn’t free of cost.

The United States also faces a conundrum on Taiwan. The European Union will have to work out how to deal with Orbán. NATO may face further freelancing from Erdogan. But despite all these challenges, the liberal world order will continue to survive for as long as there are people left who are willing to fight for it. And having been reminded of liberalism’s reasons for existence, for now, liberals around the world have reasons to be slightly more hopeful!