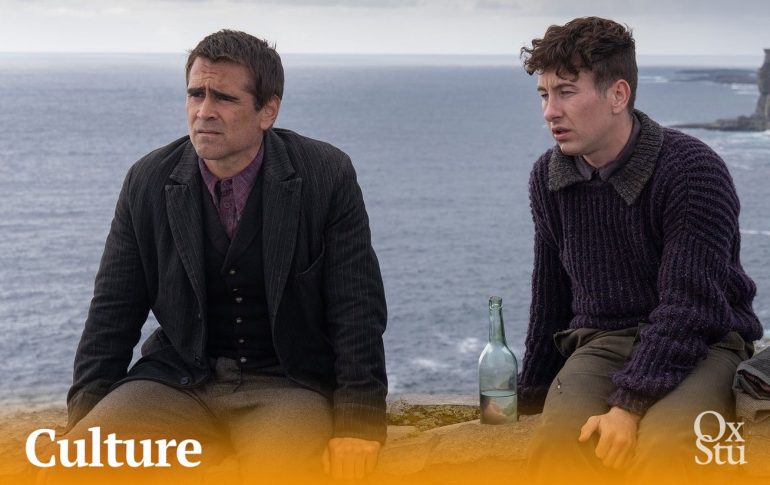 The Banshees of Inisherin – Review

The Banshees of Inisherin: 8/10

Two friends living on a distant, desolate island off the coast of Ireland ends their friendship one day and entangle themselves in an incessant and depressing feud over why their friendship ended. If you think this plot is too simple, banal and uneventful for a feature film, then Martin McDonaugh’s latest black comedy-drama ‘The Banshees of Inisherin’ is setting out to prove you wrong.

Very much in the veins of ‘In Bruges’, McDonaugh’s 2008 sharp and acerbic crime comedy, ‘Banshees’ is a return to Farrell and Gleeson, to the witty dialogue and tongue-in-cheek wordplay, and to the hilarious banter. This film is replete with a lot of fecking Irish banter, but it is the banter that gives the film its heart and soul; that is, McDonaugh’s caustic, penetrating and irreverent screenplay.

Colin Farrell plays Pádraic Súilleabháin, a simple man who lives a monotonous life of tending to his animals, drinking at the pub, frolicking and arguing with his sister and repeat. His dullness defines him and is apparently the explanation for all that ensues. One day, he finds his disgruntled friend Colm Doherty at the pub, played by Brendon Gleeson, who has abruptly decided to cease his relationship with Pádraic, and is so committed to do so that he is willing to resort to self-mutilation. Bewildered and angered by Colm, Pádraic equally devotes himself to the frustration of Colm’s commitment, as their animosity quick turns from trading abrasive insults to blood-shattering violence.

Farrell shines as the lonesome Pádraic. As McDonaugh likes to repeatedly point out, there is seemingly nothing interesting about this character (aside from his name which he finds blatantly uninteresting). It is a testament to Farrell’s acting that he makes Pádraic interesting, imbuing him with intense, earnest and exhaustive sense of despair and heartache as he plays out the complete collapse of a man’s purpose, self-worth and ultimately sanity. Meanwhile, Gleeson sells the stubbornness of his character convincingly, revealing the solitude and melancholy of a bitter men who has sorrowfully watched the world and time go by and realized the fleeting nature of his own life. In supporting roles are Barry Keoghan and Kerry Condon, both of which deliver respectable performances as the ‘clown of the town’ Dominic and Pádraic’s sister Siobhan that shine a light to the inanity of McDonaugh’s world. The donkey also deserves a shoutout.

There are visual filmmakers, and there are literary ones. There seems to be little doubt that McDonaugh falls into the latter camp. His dialogues are his forte, fitting for a playwright, and is what saves ‘Banshees’ from being a tedious, exasperating ‘chamber piece’, filled with deeply irritating and unlikeable characters. Yet, McDonaugh manages to capture surprisingly sweeping, if not particularly inspiring, visuals, aided by Ben Davis’ lush cinematography of the Emerald Isle (that is Emerald with a big capital E). The loughs, the cliffs and the hillsides provide a rugged and secluded backdrop to the unraveling of the friendship and the violence that follows, accentuating and aggravating the isolation of these broken, dreary men.

The Irishiness is proudly on full display, from the Guinness to the ‘craic’ at the local pub, but what’s most Irish is its honest, brutal and incisive commentary on the ludicrous, nonsensical, and pointless nature of the never-ending civil conflicts that have plagued the country. More importantly, it is a biting satire about the loss of civility, the toxicity of men and the fragility of peace, all of which are solemnly tragic and universally understood (or as history has repeatedly shown us, misunderstood).

As much as ‘Banshees’ explores these weighty themes, its plot and setting limit its ambitions and constrain it to its smallness and staginess.  It’s a double-edged sword, ensuring that the film is easy to digest but hard to impress. There is nothing too boundary-pushing, awe-inspiring or cinematically ingenuous. Nonetheless, it is a refreshing viewing experience, and stands apart from most of the late-season movie offerings for its originality. Indeed, ‘Banshees’ is so full of absurdity, of irony, of extremities and polarizations, that supposedly the funniest film of the year is also, in reality, one of the saddest. And that in itself is a small act of brilliance.

‘The Banshees of Inisherin’ will be released on October 21st in the United Kingdom.