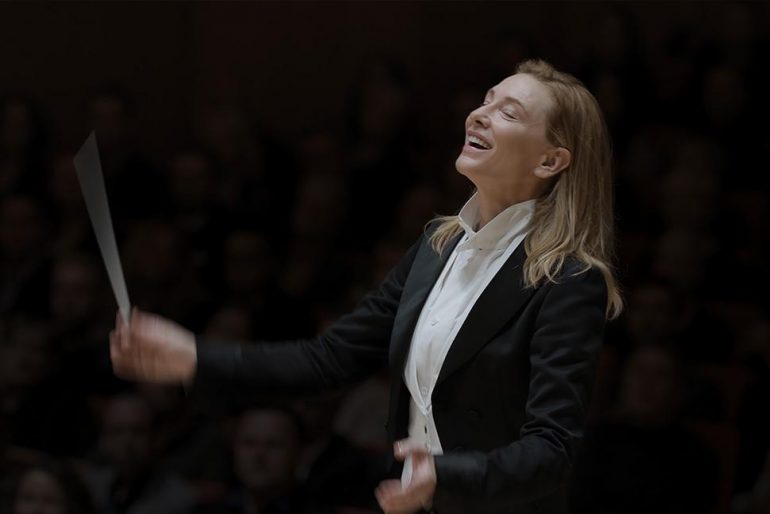 In the midst of all the cheers and jeers at this year’s Venice Film Festival – now in its 79th iteration – ‘Tar’, the latest film from Todd Field in 16 years, has emerged as a film as close to a unanimous critical and audience favorite as one can. No surprise here, as Field has weaved together a profound and deeply sensitive piece on the fragility of success that is as calculating and meticulously crafted as a delicate doll house. He presents a singular creative vision, unmarred and uncompromising in its fastidious execution. It demands unwavering attention from its audience and captures it with throat-squeezing intensity as he slowly conducts a crescendo of tension, mystique and control to its rousing, pulsating finale.

In Tar, Cate Blanchett gives a performance of a lifetime as the titular character, the principal conductor of a world-class German orchestra in Berlin. She is widely celebrated for her ingenuity and talent, living a jet-setting life of luxury and fame, obscured from the world’s problems. As we follow her various endeavors at the apex of her career, from her preparation for a live-recording of Mahler’s fifth symphony, to the release of her autobiography, the aptly titled Tar on Tar, we start to slowly detect the cracks in her austere façade, and the walls of duplicity she has carefully constructed around her seemingly immaculate world. Along the way, she has to deal with the dangerous obsession of a former mentee, the pestering of Elliot Kaplan (played by Mark Strong), a part-time conductor whom she has founded a fellowship to promote aspiring female conductors with and the arrival of a new, impertinent and prepossessing Russian cellist in the orchestra, all with a sense of menace and dread lurking in the background amplified by abrupt but spellbinding sequences of dreams, illusions and distorted memories.

Tar unfolds like a puzzle with disparate storylines and disparate relationships. How Field slowly glues the pieces together over its protracted runtime is an act of patience and subtlety. He lets his scenes play out, sometimes longer than necessary, to give audiences the space to absorb every minute detail presented and to allow his actors the maximum expanse for their performances.

Blanchett, in a masterful exercise of emotional control, presents an aura of elegance, authority and high-society hubris, but offers just the right amount of inconsistency to reveal the buried insecurity, paranoia and understated anger in the character. In her performance, the passionate and the fearful coexist, swaying the character from the likeable to the abhorrent. The supporting cast is also top-notch, with Nina Hoss and Noemie Merlant giving standout performances as Tar’s partner/concertmaster, and her assistant respectively. Aided by studious cinematography from Florian Hoffmeisteren and an engrossing score by Hildur Guðnadóttir, this is an exemplary showcase of cinematic craftsmanship.

The film is replete with sensational set pieces, not least of all its expertly staged opening scene. In an onstage interview with the real-life New Yorker’s Adam Gopnik, we are introduced to all we needed to know about Tar’s background, achievements and personality, all through an enthralling conversation between the two. Another scene where Tar guest-lectures at Julliard and berates a BIPOC pangender student for expressing a distaste for Bach is also a highlight, featuring some of the sharpest writings and strongest acting on film in recent memory that thoroughly captures the patronizing disposition of the titular character.

Field is not offering definitive messages here, nor is he prone to melodrama. The open-ended epilogue is a testament to that. He is not interested in pleasing the audience, or to provoke certain feelings of empathy and antipathy in them. This may lend the film a layer of aloofness, augmented by a high-brow subject matter that can leave viewers cold and unmoved. Many may proclaim to admire the film but find it hard to love. There is much veracity in those assessments. Yet, Tar is razor-focused in depicting the rise and fall of a great contemporary artist, a celebrity, an icon, a success story, a human being. In doing so, it cements Field as a watchful observer of the cultural discourse of our times, and a documentarian of the polarizing and conflict-ridden society that we inhabit, filled with an antagonistic media, antagonistic politics, and antagonistic human relationships.

At its core, Tar is a slow-burn, multilayered and transfixing character study. It is about the glorification of artistic license and the indictment of cancel culture. It is about cruelty and emotional violence. It is about the loss of our capacity to empathize and to communicate. More importantly, it is about our innate ability to reinvent and revive. The destination of the film is secondary, but like the whirlwind nature of life, it is the journey of downfall and survival that matters.