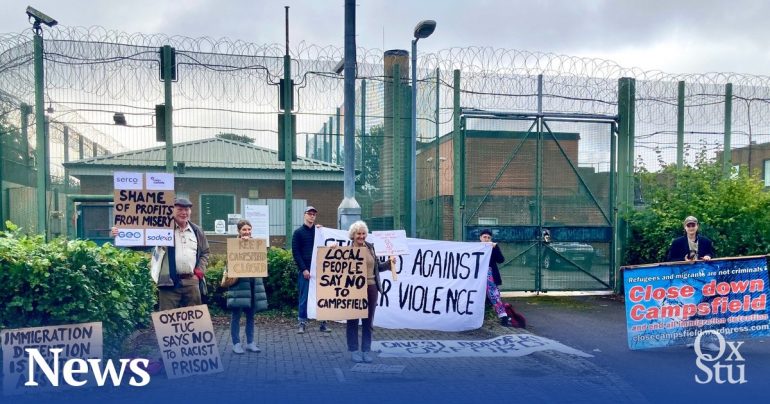 Protests Against The Re-opening of Campsfield House IRC

On 21st September, the Home Office announced that it was inviting prospective bidders to visit the Campsfield House Immigration Removal Centre on the 29th September, with a mind to reopen the centre in order to detain male asylum seekers. They were met by a protest by local campaigners of the Coalition to Keep Campsfield Closed, who held signs reading “Shame of profits made from misery” and “Local people say no to Campsfield”.

This decision comes as part of a plan by the Home Office to reopen two detention centres –  Campsfield House, just north of Oxford, and Haslar Centre, in the Home Secretary’s own constituency of Gosport, which is near Portsmouth. The sites were closed in 2018 and 2016 respectively, owing to previous policies of Conservative governments which lowered the demand for detention centres by trialling other schemes to house asylum seekers. According to the Guardian, the scheme is projected to cost the Government £399 million and will allow for the housing of 1000 people, thereby increasing the UK’s capacity of detention centres by 1/3rd.

Bill MacKeith, of the Coalition to Keep Campsfield Closed, said in response to the Home Office announcements: “Companies like Mitie, Serco, Geo and G4S make money out of locking up innocent people without time limit and without proper legal oversight.” In addition to this, MacKeith reiterated the discontent among locals around this project and said that his Coalition are committed to keeping up the “profile of local opposition”. The Coalition is supported by various local groups, including XR Youth Oxford and Asylum Welcome.

Opposition is being directed partly in the immorality of the use of detention centres by profiteering security firms, while the costs on behalf of the Government for renovation of the centres seem steep during a cost of living crisis and on top of other rises in Government expenditure. The campaign is also supported by Layla Moran MP, who stated that the “community fought hard for Campsfield House to be closed, and we are ready to fight to make sure it stays that way.”