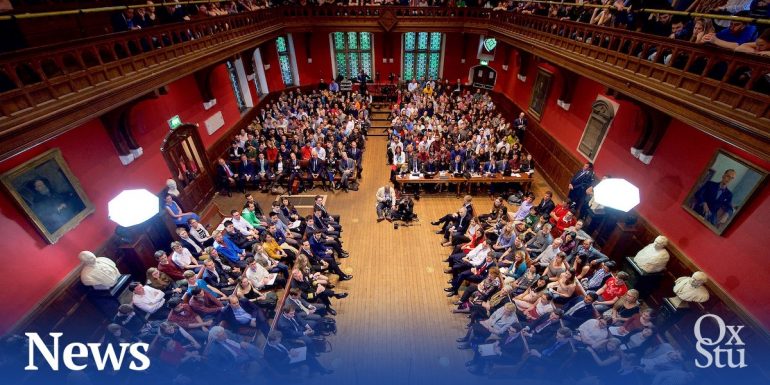 This change would solidify the Union's independence from the SU.

A heated Oxford Union governing body passed a rules change this afternoon, brought by President-Elect Charlie Mackintosh, on ‘Independence from the SU’.

This change would add a new subclause to Rule 34(c) saying, “No Member shall nominate themselves for Standing Committee or for Office if they shall be serving as a Sabbatical Officer of the Oxford University Student Union during any term in which they would automatically be a voting member of Standing Committee.”

The motion sparked considerable debate between various members of the governing body.

Proponents such as Standing Committee member Spencer Shia, who seconded the motion in the meeting, said that without this policy, people who span the line between the Union and SU are likely to side with the SU who pays them and this “puts a real threat to the independence and free speech of [the Union]”.

The motion was also supported by Librarian-Elect Disha Hegde. She explained that “the SU can mandate someone to have to denounce something or release a statement to say they condemn a speaker coming and that same person would also have a vote on the governing body of the Union.”

Hedge is currently the sitting Chair of Oxford SU Women’s Campaign which in Trinity Term 2022 criticised the Union’s Fashion Show event whilst Hedge herself sat on the Union’s governing body.

People with reservations such as Chief of Staff Israr Khan explained that, given the Union is a private members’ club, this change would place undue limits on people’s private lives and what they choose to get themselves involved with.

An objection to the motion was eventually lodged by Treasurer Joshua Chima and after contentious speeches back and forth, the motion passed with 9 votes in favour which constitutes a majority. It will now be brought to a Public Business Meeting on 13th October to be voted on by the wider membership.

After the meeting, several high ranking Union officials spoke exclusively to The Oxford Student about their thoughts regarding the motion.

One governing body member said, “It seems entirely hypocritical that the President-Elect would bring this motion given he is actively working with the SU in hosting the annual Freshers’ Fair stall and raising thousands of pounds for the membership drive. In fact, there are Union governing body members who sit on Student Council and make high level decisions within the SU, so it seems malicious to restrict the contrary. He clearly intends on targeting certain individuals and carries a political vendetta. ”

A member who was in favour, however, said, “After several people have gotten involved in both the Union and the SU in recent terms, this is a much needed change.”

This motion comes to the Union after a similar motion came to Oxford SU’s student council in Trinity Term 2022 regarding conflict of interest. That motion stipulated that those running for a position in the SU must ‘declare to the Returning Officer any roles within any relevant organisations to which they were elected or appointed since their matriculation’. Further to this, sitting Sabbatical Trustees now ‘must publicly declare any current roles within any relevant organisations as well as any new roles they take on’.

Charlie Mackintosh commented, “Members of the Union’s governing body must carry out their obligations and duties with the Union’s best interests at heart – and not use their position to influence proceedings based on additional mandates they may carry, due to their involvement in other societies. The proposed rules change seeks to maintain transparency and promote good governance by ensuring that any potential conflicts of interest are declared to the Returning Officer, as part of an individual’s election manifesto submission. OUSU sabbatical officers not only receive financial remuneration for their work but are also expected to align with the official views and positions of Oxford University. An overwhelmingly majority of Standing Committee and I believe that this rules change is necessary to safeguard the Union’s independence by ensuring that candidates are transparent in declaring any potential conflicts of interest.” A full version of Mackintosh’s comment can be viewed here.

The Oxford Union Society and the aforementioned members including Disha Hegde, Spencer Shia, Israr Khan and Joshua Chima have all been contacted for comment.