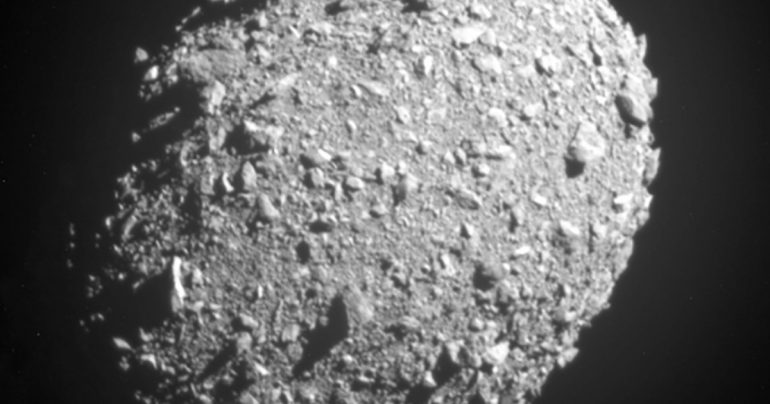 One of the last photos of the asteroid Dimorphos, taken moments before impact.
Science and Technology
·8th October 2022

Image description: A large, grey, textured asteroid against a stark black background. This photograph was taken by the DART probe just moments before impact.

For most space scientists, the thought of their satellite smashing into an asteroid would make them recoil. But when NASA’s DART probe did exactly that shortly after midnight on Tuesday, scientists around the globe celebrated their success.

The DART probe wasn’t just any satellite. About the size of a large refrigerator—although somewhat more expensive at £300 million—it has spent the last ten months in space, travelling towards its distant target, Dimorphos. Dimorphos is a small moon, or moonlet, orbiting the larger asteroid Didymos. As celestial bodies go, it was relatively inconspicuous and even nameless until two years ago, when it was selected as the first asteroid to be redirected by human intervention. The asteroid itself doesn’t pose any threat to humanity: its trajectory will never bring it close enough to Earth for it to collide with us. Rather, it is the subject of an experiment to assess if asteroids can be deflected in case one should ever threaten Earth.

The thought of asteroids smashing into our planet and destroying life as we know it has captivated humans for a long time—nobody wants to share the same fate as the dinosaurs. As NASA spokesperson Glen Nagle put it, “all they could do is look up and go, ‘Oh, asteroid’ […] we want to have a better chance.” Films have depicted a variety of potential solutions for a celestial body heading our way, most of which involve blowing up the offending asteroid. Rather than blowing up Dimorphos, the DART, or double asteroid redirection test, involved more of a well-placed nudge. The aim of the collision between the DART probe and Dimorphos was to just change the asteroid’s trajectory slightly—still a daunting task given its size: Dimorphos is about 160 metres in diameter, the size of 1.5 football fields, and is estimated to weigh around 5 thousand tonnes. In comparison, DART is tiny, and weighs only half a tonne. So how can such a light spacecraft shift the orbit of such a large asteroid?

The method of deflection is known as “kinetic impact” and is based on DART transferring both its kinetic energy and its momentum to Dimorphos on impact. A fast-moving spacecraft possesses a lot of energy, and as DART was moving at around 20 thousand kilometres per hour, over 10 billion joules were transferred to Dimorphos at the time of impact. When DART hit Dimorphos, all this energy led to a crater being formed and matter from the asteroid being blasted out into space. This ejection of material from the crater pushed the asteroid in the opposite direction, further helping to alter its orbit.

DART was moving at around 20 thousand kilometres per hour, over 10 billion joules were transferred to Dimorphos at the time of impact.

All being said and done, the change in Dimorphos’ orbit is still small: it currently takes the asteroid just under 12 hours to orbit the larger asteroid Didymos, and it’s thought that after DART’s impact, it will circle Didymos only a few minutes faster than before. With the deflection of the target being so small, any mission to knock an asteroid on a potential collision course with Earth out of the way would thus have to be done several years in advance for it to work. This project is therefore only one part of the international space community’s efforts to protect Earth from asteroids. Both the European Space Agency and NASA track and analyse asteroids that are considered to be close to Earth’s orbit, and reassuringly, none of the big ones are set to collide with Earth in the next millennium or so. Nonetheless, small asteroids can also cause substantial damage. A meteorite around 20 metres in diameter exploded in the atmosphere above Russia in 2013 and caused a shock wave that injured over a thousand people, mainly from shattered glass and collapsing walls.

Such events, although scary, are relatively rare. The publicity around the DART mission has therefore sparked some debate, as scientists argue that the threat posed to humanity by climate change is far greater and more likely compared to that posed by Earth-bound asteroids. The parallels with the film Don’t Look Up, a climate change denial satire released only last year, are indeed quite striking. In the film, the imminent danger posed by an asteroid hurtling towards Earth is mostly ignored, until someone discovers a way to financially profit from it. Meanwhile, in the real world, it seems to some scientists as though the imminent danger posed by climate change is mostly ignored while deflecting asteroids receives large amounts of funding.

Despite the criticism, the DART mission is set to benefit the scientific community in other ways besides the potential Earth-saving applications. Images of the impact recorded on DART’s travel companion and photographer, the Italian Space Agency’s LiciaCube, and on ground-based telescopes will provide data on the amount of dust released from Dimorphos. The dust cloud will depend on the type of rock Dimorphos is made of, enabling the researchers to learn more about asteroids.

Over the next few weeks, scientists will be monitoring the asteroid from Earth to see if Dimorphos’ orbit has indeed changed. But in NASA’s eyes, the mission is already a success—it has nudged the concept of defending our planet against asteroids out of the realm of Hollywood and solidly into real life.