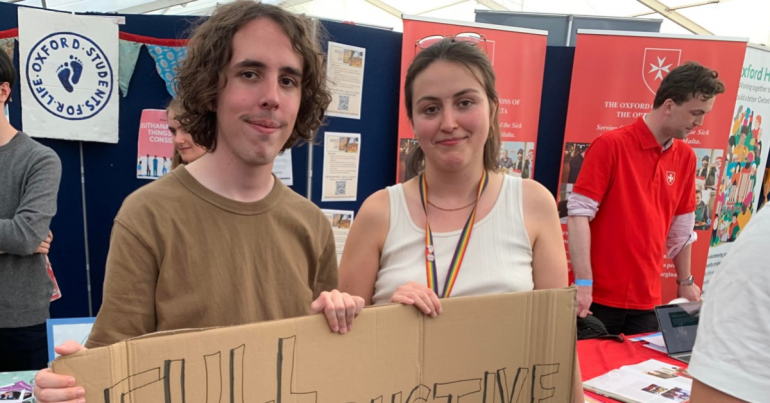 Last Thursday the 6th of October , there was a peaceful protest at the Oxford SU Freshers’ fair in front of the Oxford Students for Life stall (an Anti-Abortion group). This follows on from a protest last year in which materials from the stall were binned, and the University condemned the protestors.  The Oxford SU this year also made national news for proposing to include trigger warnings on some of the “potentially triggering stalls” at the Freshers’ Fair. However before the event, the SU made these trigger warnings opt in, and so there was no trigger warning on the Anti-abortion group’s stall.

Last year, protestors at the stall were condemned by the University for breaking guidance on upholding free speech. On February the 2nd 2019, the Government gave updated guidance to Universities on how to protect free speech on Campus which advised that “an SU should make sure a wide range of views are represented at freshers’ fairs… if the freshers’ fair is generally open to all those who are interested in having a stall, but a certain group or individual has their application refused based, for example, on their views or beliefs, the SU would need to consider whether the decision to refuse them access discriminates against them on the basis of a protected characteristic.”

This was interpreted as meaning that the OSFL (Oxford Student’s for life) stall would have to be present at the 2021 Freshers’ fair, given that its forced absence would discriminate against their beliefs. Further, as the society is registered with the Proctor’s Office and not the Oxford SU, the SU did not have the power to prevent their presence at the fair. This resulted in the protests mentioned above.

Fearing a similar backlash, the Oxford SU released a Facebook statement in the build up to the 2022 fair : “We want to reassure you that we have put in place mitigations to support the welfare of students. These include making stallholder regulations more robust, including material content reviews, trigger warnings being placed on several stalls with potentially triggering content”

Oxford SU’s statement quickly reached national news outlets and tabloids. One article from The Daily Mail noted that an Oxford University spokesperson expected the Student Union to abide by Oxford’s freedom of speech policy, “which would not include the imposition of trigger warnings or material content reviews for registered student societies.”

Before the event, Hannah Edwards, the social secretary of OSFL spoke to the Oxford Student on the trigger warnings saying that: “Though Oxford Students for Life is not aware of having received any notice that our stall will carry a trigger warning, we have experienced opposition from the Student Union in past years, including…the placing of a warning on our stall.”

When asked whether they expected a similar backlash, she responded that: “We anticipate facing backlash again, including in the form of a trigger warning, and are prepared to stand up both for everyone’s right to life, and their right to free speech.”

When our reporter came to the stall of the anti-abortion group, there was no trigger warning on it.

However, there was a small group of students next to the stall with a board saying “Full Reproductive Freedom now” respectfully offering a counter-perspective to the anti-abortion group.

The Oxford Student asked one of the protestors, Emily, a postgraduate from Nuffield, why she was protesting and she replied that:

“I protested because, as a feminist, I wanted to make the case for full reproductive freedom. I wasn’t aware that there would be a stall advocating against abortion until today. As both a postgraduate student and tutor, I felt it was important that new Oxford students were not intimidated by the unchallenged presence of an organisation actively campaigning to curtail our bodily autonomy. 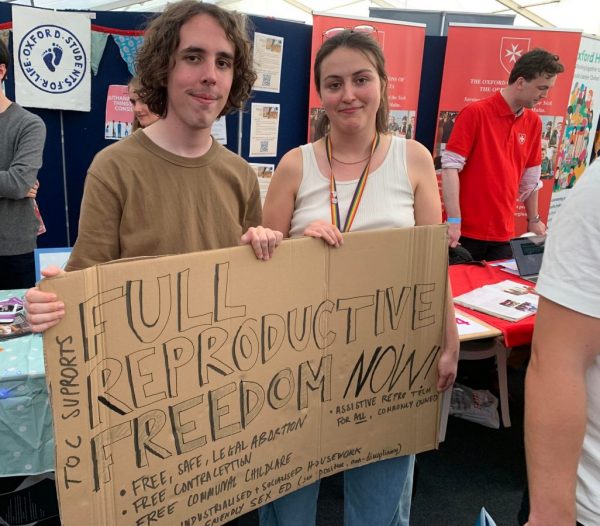 I grabbed some friends and fellow organisers to join me in taking a stand. I quickly cobbled together a sign stating my opposition to the stall, as well as my understanding of full reproductive freedom.”

When asked what reproductive freedom means to her, she replied;

On finally asking whether she believed that OSFL should have a stall at future freshers fairs, she replied that she believed they shouldn’t, given their attempts to curtail female bodily autonomy.

The Oxford Student reached out to OSFL for comment on the protests, and they replied that:

“We regret that a small number of individuals at the fair felt that our presence, and our aim to defend life from conception to natural death, demanded protest. Nevertheless, we support their right to protest, and maintain our commitment (regrettably not shared by all) to respectful dialogue on issues of life.”

The SU declined to comment although sources said that they were glad that the event had been peaceful.

Image description: Two protestors in front of the Anti-Abortion stall.