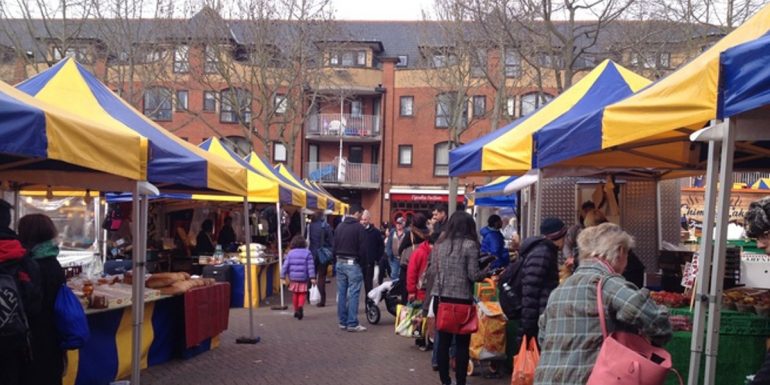 An Introduction to Gloucester Green

One of the best food places in Oxford has to be Gloucester Green. It’s an international food market open Wednesday to Saturday, selling anything from souvlaki to bao, pasta to curry. It’s a great place to escape college life for a lunchtime, some delicious food and socialise.

I should mention however, before anyone gets the wrong impression, it’s no hidden gem of Oxford, in fact often it is very busy. Nor should you be expecting a cheap lunch. Generally, lunches here range from £5-10, so I would say most people count it as a treat rather than a regular occurrence.

As I live in Worcester, I do have my favourites, but you’ll have to bear with me, as I never remember the names of the stalls. The Mexican place is delicious, though small portions and the waiting time is often one of the longest in the market. In general, I think Oxford is lacking a proper Mexican restaurant, and this is the closest I seem to be able to get to it. There’s a new Korean stall that sells cupbap and bibimbap, which I have only managed to go to once but was exceedingly tasty (and surprisingly filling, which is sometimes lacking from the other stalls). All of the numerous pad thai stalls are great, but as it’s very popular it’s frequently a bit of a wait, so don’t expect to be ready for you in a rush.

One of the most popular places is the Asian snack place, always one of the last (or first, depending on your walking direction) stalls, but normally you can spot it by the red lanterns and the extremely large queue. Don’t fear though, they serve very quickly so you don’t have to wait awhile. Of course, it’s tasty, but one of its main charms is the £1.50 bao buns and other snacks that range between £1-£2 that fill you up for under a fiver. However, Pie Minister have recently set up a stall that sells pie and gravy for £5 as well, so if you’re feeling like some pastry, as a Northerner I always am, you can satisfy your cravings without breaking the bank too much.

I think one of the beautiful things about Gloucester Green is that it feels continually fresh and exciting with the ever-changing stalls, while also feeling homely and communal. The best spent Gloucester Green visit is one with friends and family, trying new foods you’ve never had before. I would definitely recommend heading down at some point to explore the varying options while also browsing the secondhand clothes and nick-nacks stalls; it’s a lunchtime well spent.