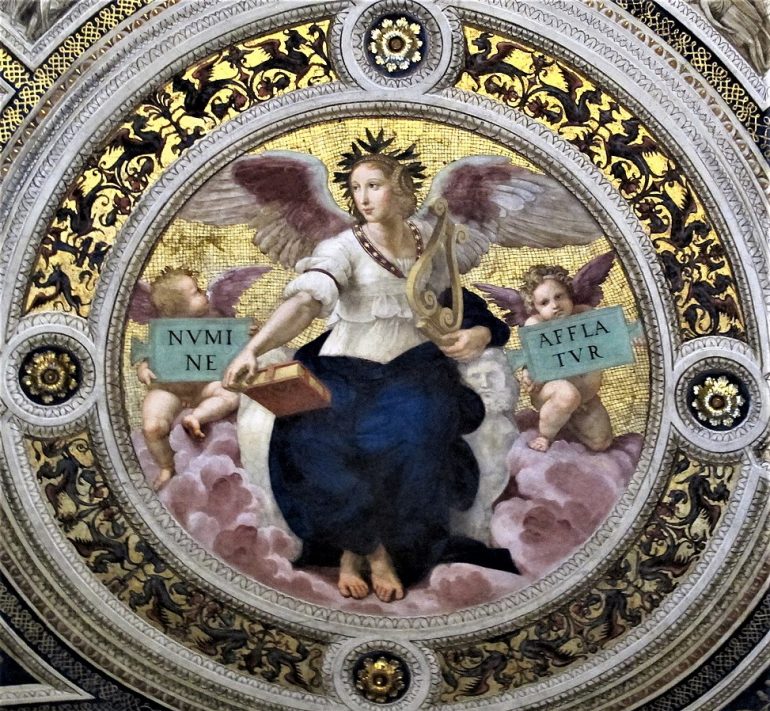 While the world seems to be morphing steadily into a technological dystopia alike to that seen in Huxley’s Brave New World, and words themselves seem to have been replaced with pixels as the basic unit of human understanding, reading, writing and enjoying poetry seems a relic of a past world. Like playing the harp, writing with a quill, or simply using a mobile phone with a keypad, poetry, it feels, has become a statue reminding us of what once was. Simon Armitage’s Floral Tribute, written to commemorate the death of Queen Elizabeth II, served as a stark reminder to many that verse appreciated widely by the public in the modern day only takes the form of occasional poetry, published, like to the horse and carriage carrying the Queen’s coffin or the military funeral parades through Westminster, to uphold tradition rather than as a part of everyday cultural practice. Ofqual’s removal of poetry as a compulsory module for GCSE students across the country in 2022 seems to highlight how far removed those in power feel it has become from the lives of those shaping our future. However, in a modern world where ‘Poetry Is Dead’ has become a familiar online phenomenon, verse remains essential to human nature’s comprehension of, and commentary upon, society. As John Keats suggests ‘The poetry of the earth is never dead’; poetry is the voice that speaks within all of us, the translator of human emotions, words, that in all their complexity, make sense of the world. While it is perhaps changing as a literary medium, evolving in parallel with the evolution of the world, it will never be dead. It is central to the human condition.

Poetry is defined in the Oxford English Dictionary as ‘Composition in verse or some comparable patterned arrangement of language in which the expression of feelings and ideas is given intensity by the use of distinctive style and rhythm’. More simply, poetry is language deliberately formulated in a particular way to achieve a particular effect. Language, as the mechanism by which we communicate, is inherently functional, with every utterance arranged or composed uniquely to reach a particular purpose, emphasise a certain feeling, or convey an idea. Asking a friend ‘Can I use your pencil please?’ demonstrates use of straightforward language arranged deliberately as a polite question, composed with the modal verb ‘Can’ at the outset to emphasise that it is a request and efficiently appease the need for a pencil without seeming rude. Commenting ‘The stars look super beautiful today’ when on a dinner date shows an adjectival arrangement constructed to reflect the zeal at being on said date, with ‘today’ placing focus upon the here and now. Merely muttering ‘Damn it’ under your breath with no particular audience is language composed to produce some kind of outlet for frustration.

The point is that everything spoken by a human is a deliberate arrangement of language with a distinctive pattern and a definite purpose. Therefore poetry forms the very basis of human speech; it is alive in all that we say.

The world runs upon deliberate arrangements of language, and as we have already established, deliberate arrangements of language are poetic. Take Liz Truss’ speech to the UN General Assembly last month – generally monosyllabic, forthright sentences with iambic rhythm composed for assertive effect. Use of anaphora, triples, anadiplosis and lengthy pauses to create intensity and emphasis. Both the idea of the United Nations being a metaphorical ‘beacon of promise’ and the Queen being the metaphorical  ‘rock’ upon which modern Britain was built highlight use of figuration. Take Amazon’s ‘This Is A Man’s World’ advert celebrating its all-female delivery stations in India. The use of the paradox of ‘trailblazer’ and ‘mom’ gives intensity to the subversion of typical oppression of third-world women as domestic, secondary figures, with the fragment sentence ‘And mom.’ only adding to the connotation of power. Even the Call Of Duty franchise, which many may suggest is causing the death of poetry, or literature as a whole, is based on deliberate arrangements of language. The idea that ‘Revenge is like a ghost…It takes over every man it touches…Its thirst cannot be quenched…Until the last man standing has fallen.’ upholds clear poetic construction, with simile, the personification of revenge, and the staccato rhythm with large pauses demonstrating a deliberate attempt at maintaining a suspenseful and chilling tone. The plosive punchy rhythms of ‘Death is no disgrace’ and ‘You’re gettin’ shot up’ further show how even within video games, poetry, if defined as a conscious composition of language, is still present. Computer-mediated communication has perhaps even allowed for more distinctive styles of language to emerge, and facilitates the development of new possibilities and patterns. While acronymic coinages like ‘lol’, ‘lmao’, ‘ttyl’, ‘wuut’ and ‘ily’ seem to many like the furthest thing possible from Wordsworth and Blake, these constructions are compositions of language with unique style and particular arrangement, designed for efficient communication on online platforms. If haiku, three small phrases, are considered poetic due to their consistent syllabic pattern, then consistent acronymic pattern, must also be poetry. What separates Bashō’s haiku ‘The Old Pond’, which reads ‘An old silent pond / A frog jumps into the pond / Splash! Silence again’ and influencer Molly-Mae Hague’s 2022 Instagram caption ‘Not all storms come to disrupt your life…some come to clear your path’ into spheres of poetic and non-poetic? A very dogmatic, pretentious and ultimately outdated idea of what literature is, if you ask me.

While it is true, as Robert Graves suggests, that ‘To be a poet is a condition, not a profession’, and that poetry is in all that we say, all that we see and is all around us in the modern world, it is perhaps the traditional idea of a poem – words arranged in separate lines, lines arranged in stanzas, often ending in rhyme, and found in books – that is thought to be dying. Although it is undeniable that people in the twenty-first century are unlikely to pick up a book of poetry and read it, when has this ever been a commonplace public practice? If poetry is dead in the modern world, then it has been dead for centuries. You would have to go back to the Romantics to be able to see poetry used even somewhat widely as an emotional outlet. Even still, this was only for the noble; the likes of Lord Byron and Coleridge were born into prestige. You would have to go back even further still to the Medieval era to be able to see common people performing and sharing poetry as a typical recreation. It is even tenable to argue that poetry is more accessible to all nowadays, and so more alive, than it ever has been. The rise of Instagram poetry is just one example of how technology and social media have facilitated the expansion of traditional verse and given it more of a life than it has ever had. @poets is an Instagram account with 4.2 million followers and has posted nearly 10,000 poems, many being photos from books or collections, and many directing followers to purchase said books or collections. Hence, not only does Instagram give the public an accessible platform to read poetry upon but also encourages the enjoyment of poetry in the conventional form that many feel is dead. Facebook similarly acts as a platform for the reception of poetry, with the group ‘Poetry lovers’ which celebrates poems written by past greats and the average living person, having 2 million followers. Moreover, rap music, which is undeniably a huge part of worldwide culture in 2022, and music in general for that matter, is poetry. Rhymed lines of words in verses commenting on particular societal matters – the definition of both poetry and music. Dave’s ‘Black’ is rhymed verse speaking out on racism and promoting the Black Lives Matter movement. Wordsworth’s ‘London, 1802’ is rhymed verse speaking out on the selfish and inward-looking the people of London were.

What is the difference, other than the same elitist outlook on literature that would separate poetry and Instagram captions?

It seems to me that as much as people are not reading poetry in the modern world, there has been a huge upturn in slam poetry and spoken word events. This is perhaps even relatable to the Medieval culture of reading and sharing poetry orally, suggesting verse is returning to its roots, and to a time when it was most alive within common culture. Spoken word artist Kae Tempest’s 2017 Glastonbury performance, whereby she used poetry to attack Theresa May and the Conservative government by telling the public to be ‘strong and stable into ruin’, highlights the use of poetry as a means of social commentary. Criticising that ‘School kids are on the hunt for lunch’ and that the government ‘Privatise and privatise [and] in private, let the nurses burn’, Tempest shows that the power of poetry is very much alive, with the stereotypically young audiences of Glastonbury rejoicing in her verse. Musical poet and spoken word artist George The Poet’s ‘Black Yellow Red’ similarly offers critical commentary upon the police brutality, civilian deaths, military involvement and the lack of peaceful transfer of power since colonisation in his home country Uganda, and represents the collective dissatisfaction Ugandan people. While it could be argued that this is not poetry in its traditional form, and that classical poetry is dead, there has been an upsurge in modern translations of classics in recent times. Emily Wilson’s translations of Odyssey and Ilead demonstrate an increasing need for accessibility to this kind of traditional poetry within the modern world, and so that its importance is expanding rather than dying.

Poetry has changed radically. There is no doubt about that. Just like its development from oral to written medium, from inscriptions on trees and walls to paper, and then to print following the emergence of the printing press, it has developed, in parallel with societal change, to be received through technological medium. This is not a sign that it has died but more a sign that it is very much alive. The fact that it changes with the times to suit human nature is proof of its poignance within civilisation, and that it will never die. It is central to the human condition.

Image Description: Allegory of Poetry, an angel holding a book