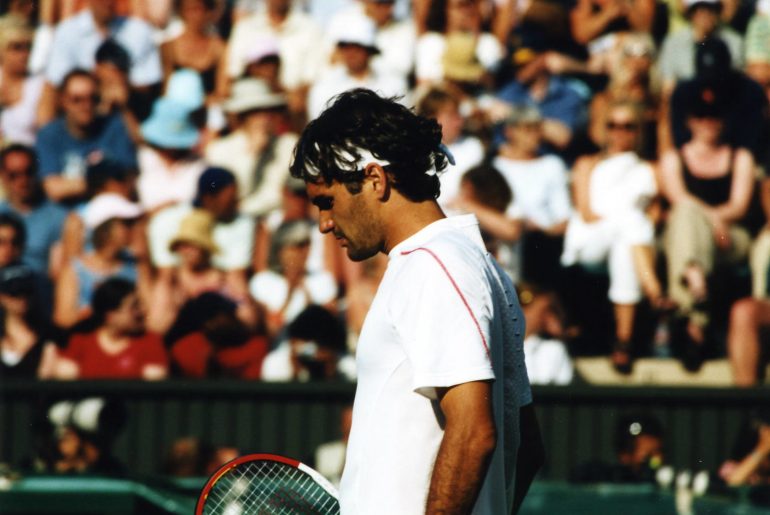 Roger Federer: Goodbye to the GOAT

On Friday 23rd September, Roger Federer played his last game of professional tennis in London at the Laver Cup. It was certainly a fitting place to end his 24 year long career. Wimbledon, held in London, is the tournament most synonymous with Federer and his brilliance on court, where he found the most success, winning the tournament a record eight times, including a five year stretch of utter dominance between 2003-2007.

The Laver Cup being in essence an exhibition event, Federer was surrounded by the other greats that too have defined his career and this era. Andy Murray, Novak Djokovic and of course Rafael Nadal, with whom he played doubles in his final match, were the perfect company for his swansong. The occasion was of course a sombre one, tennis’ biggest ever icon was gone for good. Looking at the footage, it’s hard to tell who was crying more, Roger or Rafa. Naturally outpourings of sadness and remembrance engulfed social media, with pretty much every sportsperson and celebrity alike acknowledging the moment and sharing just their little part of the Federer legend.

The accomplishments and accolades that litter any exposition of Federer’s career are astounding, but many have been superseded by both of the other members of the Big Three. Rafael Nadal now has 22 Grand Slams, two more than both Federer and Djokovic, the latter still young and good enough to earn at least a couple more. Both Nadal and Djokovic have won more major titles (Grand Slams, Tour Finals and Masters 1000s combined), as well as leading their respective head-to-heads against Federer. But neither are the GOAT.

Although in tennis circles debate is heated, in the public eye there is little contest at naming Federer the greatest, and there’s good reason for this. In almost every sport, to earn the respect and admiration of everyone who follows it, it’s not only what you did but how you did it that counts. Lewis Hamilton has the same number of F1 Championships as Michael Schumacher, and more GP wins, but it’s still controversial to call Lewis the GOAT over Schumacher, sometimes even over Senna too. Lebron James hasn’t come close to Michael Jordan in the eyes of many, and it approaches blasphemy to call Floyd Mayweather as greater than Muhammad Ali.

Federer is not just a tennis player, but also a brand. According to Sports Illustrated, Federer earned $90 million in 2021, good for seventh highest in the world across all sports, despite his ranking plummeting and him playing few tournaments, winning none.

Federer is a worldwide symbol of class and charisma: where we associate Nadal with underwear modelling, we see Federer with a classy Rolex on his left wrist.

The young Roger that an older generation may remember is a far cry from the consummate gentleman we regard him as now. With a trendy ponytail and flair in abundance, Federer soon knocked the old guard of legends like Sampras, Agassi and Hewitt down from the top, claiming it for his own. In the transitional period of the mid-2000s, he had no challengers and no equals, winning all but one non-Roland Garros Slam between 2004 and 2007. It was at this time that Federer’s image became established and known around the world.

In this period of utter dominance, it was not his grit, speed or power that wowed the world, but his skill, elegance and unwavering professionalism. Federer’s style on court was inspirational and attractive to everyone, if they knew tennis or not. In short, all of this is why he is so utterly missed.

In transcending the distinction between sporting legend and cultural icon, Federer’s charisma, smile, grace and golden personality cemented him as both a tennis god, and also a universally adored paragon of greatness in the wider landscape of our time.

Roger Federer has left behind a multitude of memorable moments (forgive the alliteration), the Battle of the Surfaces, that 2008 Wimbledon final, the stunning blind smash against Andy Roddick, but I’ll leave you with my personal favourite. His 2017 Australian Open victory over Nadal brought an end to a five-year Grand Slam drought, plagued with injuries and disappointments. The championship was decided on a Hawkeye challenge, the ball lands in and Federer leaps for joy in the most pure and heartfelt expression of emotion of his career. The magic of Federer is that we all felt the exact same way.