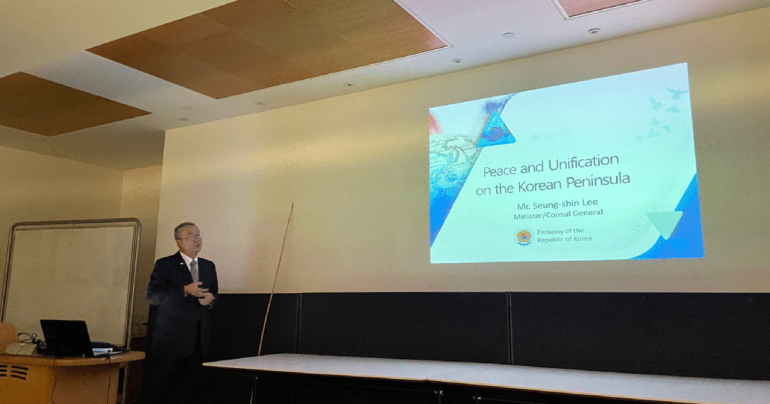 Mr Lee Seung Shin is the Consul General at the Embassy of the Republic of Korea in the UK. On the 27th September, he delivered a lecture at Oxford which laid out President Yoon Suk Yeol’s ambition for an improvement in inter-Korean relations. ‘Who here has been to South Korean?’ he asked the audience. Few hands were raised. ‘What about the north?’ he said, satisfied with the subsequent chuckles.

Mr Lee informed his audience that South Korea believes in free trade, a market economy, democracy, a rule based international order and human rights. He stated that the values of his own country are aligned with those of the United Kingdom. The lecture aimed to cultivate a better understanding of the efforts being made to pursue the reunification of the Korean peninsula. Article 4 of South Korean’s constitution seeks ‘peaceful unification based on the principles of freedom and democracy’.

The Consul General made clear that Article 4 is one of many efforts made by South Korea to achieve unification. The 1994 National Community Unification Plan envisions three stages. After a period of reconciliation, a Korean confederation would form and ultimately lead to a unified Korea.

In August 2022, President Yoon Suk Yeol offered Pyongyang his ‘audacious initiative’ which aims to aide its crippling economy on the condition that North Korea takes steps toward denuclearization. The Consul General outlined that a large-scale food program, assistance with power generation, the modernization of ports as well as hospitals and the implementation of international investment are all on the table.

Support for the pursuit of unification amongst young South Koreans is less than concrete. The Consul General was keen to highlight the National Institute for Unification Education which aims to persuade the public about potential benefits.