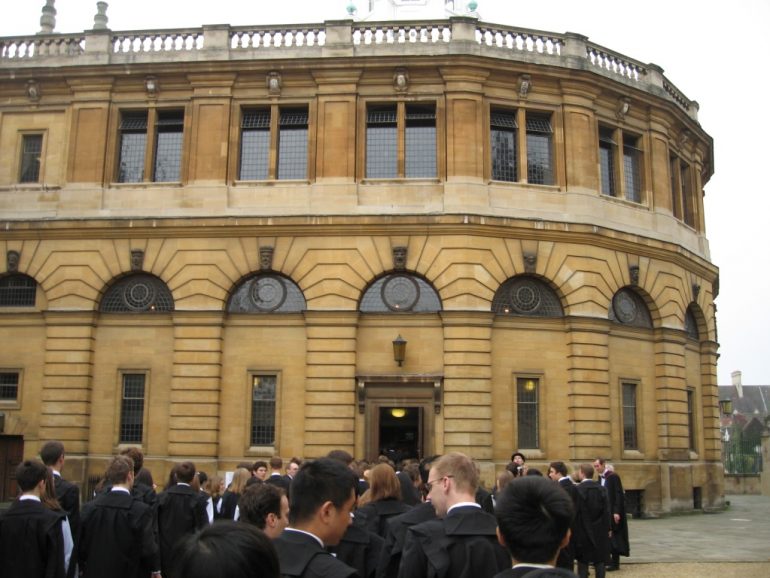 Finalists celebrate two-year anniversary of being a fresher

SHELDONIAN THEATRE – Several finalists were seen outside the Sheldonian theatre on Matriculation Day, allegedly celebrating their two-year anniversary of admittance to the University of Oxford.

Dressed in full subfusc with mortarboards carried, but not worn, the finalists snapped BeReal photos of themselves posing outside the RadCam, eyes brimming with uncharacteristic optimism.

“It’s not every day you get to dress up and pretend you just matriculated into the world’s best university,” said physics finalist Dick Feynman, saying that he had gotten so drunk that he couldn’t remember his original matriculation so he might as well redo it.

Meanwhile, third year PPEist Yoo Neon Hak indicated that he was keen to relive his “halcyon days” by reenacting iconic first year moments, such as getting freshers flu, collecting freebies at networking events, and spending a whole two hours on his degree each week. Yoo appeared to have found new reserves of energy and ambition, adding that he would “dust off his hopes” and submit his seventh bid for Union President.

Some, however, had a more academic interest in the anniversary celebrations. One researcher was reportedly amazed that undergraduates were still in the “honeymoon phase” of their Oxford degree well after Michaelmas term of first year.

“Frankly, it’s incredible that people are still processing the passage of time, instead of the days blending into an incomprehensible blur of getting shitfaced and pretending to have done work in tutorials,” said psychology DPhil student Nim Chimpsky. “Nevertheless, happy anniversary to all those who celebrate.”

At press time, the various faculties indicated that they would also be celebrating this momentous occasion by administering final exams.