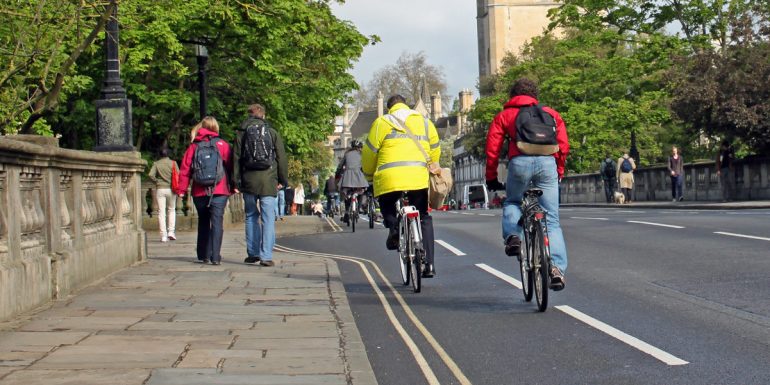 The road safety event demonstrates Oxford University’s support for the Oxfordshire County Council’s Vision Zero programme and its aim of cutting deaths and serious injuries on our roads to zero by the middle of the century. It will provide guidance and information to help keep more people safe on their journeys, however they choose to travel.

There will be an HGV that people can climb into, to help them experience how hard it can be for lorry drivers to see cyclists around their vehicle. Thames Valley Police and University Security Services will be present with stalls offering advice on road safety and cycle security, and visitors will be also able to get their bikes marked as part of the Bike Register anti-theft scheme.

Local cycling groups Broken Spoke Bike Coop and Cyclox will also be present, providing tips on cycle maintenance, carry out minor repairs, give information on the best cycling routes and promote opportunities for safety training. They will be joined by e-scooter operator Voi and other organisations from around Oxford’s travel community.

Along the way to the Vision Zero target, the Council targets a 25% reduction in deaths and serious injuries on the roads by 2026, and 50% by 2030. The Vision Zero commitment was first tried in Sweden in the 1990s; since then it has proved successful in many European cities and it is now being introduced by numerous UK local authorities as well as Oxfordshire.

In recent years, road deaths in the county have remained steady at around 25 a year, and the Council aims to make inroads into that number with a combination of policy changes, better speed management, new cycle infrastructure and wider changes such as the introduction of 20mph speed limits on many roads.

The event comes as a response to the deaths of Ellen Moilanen, who died near Oxford Parkway Station on 8 February, and Dr Ling Felce, who died on The Plain on 1 March which made national news. As part of the policy, the Council has developed a number of targets to achieve no deaths by 2050 including greater road safety education and training.