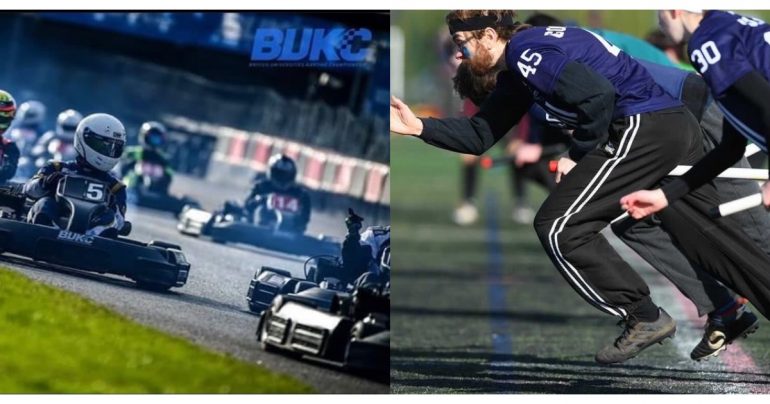 First appearing in the Philospher’s Stone, quidditch was one of the more memorable fantasy inventions audiences were introduced to in the legendary Harry Potter series. The sport, however, no longer purely exists within the fictional realm from which it was born. Rather it is now a wildly popular and ever growing university sport that you can can get involved with here in Oxford!

While there may not be the same number of witches, wizards or flying broomsticks, the intensity and excitement of the quidditch found on the fields of Uni Parks is all the same as it was in the Pottersphere.

The team’s secretary outlined that “Quidditch is a full-contact, mixed-gender, inclusive sport that originated in the US in 2005, but is now played all over the world”. They noted that “it combines elements of handball, dodgeball, and rugby, with the added challenge that players must be mounted on a broom at all times”.

Moreover, despite typical assumptions, it is not a sport purely limited to the Oxbridge cult. Indeed the team’s secretary underscored to me that the team travels “round the country to compete in tournaments against other universities”. With the main tournament of the year being the British Quidditch Cup. Fancy!

While in Oxford the Quidditch team also provides for a lively social scene. “Quidditch is a close-knit community with a friendly atmosphere which is very welcoming to newcomers” the secretary noted, with “fun and varied socials every Thursday”. Importantly the sport is also extremely accessible. Training is every Wednesday and Saturdays at 2pm in Uni Parks and are typically “fun, casual, no-commitment and always beginner-friendly”. The secretary was keen to make clear that “There’s no other sport where you can go from zero experience to competing nationally in the space of less than a year!”

To get involved you can find the Oxford Universities Quidditch Club on Facebook & Instagram or simply turn up to one of their trainings.

Michael Schumacher, Lewis Hamilton, and now you? The go karting club is a fun way to easily get involved in motor racing!

While it might have been typically perceived as an exclusively affluent endeavour the newly renamed go karting club is a relaxed, yet exciting opportunity to race in national as well as inter university competition.

Speaking to Club President Anje Sharma he was determined to underline the reasonably priced nature of the sport. “membership is only 10 pounds a year” he said, with a membership to Team Sport, the kart providers, included. He went on to add that pricing for normal days down in Reading – where the university team race each other at the indoor track – only reaching up to 30 pounds.

If your drive for competition (apologies) is even stronger however the team provides access to a selection of national competitions. The team enters up to two teams for the BUKC, a nationwide outdoor event in which any member can enter, as well as the BIKC, the indoor alternative. Moreover, competing in this team provides for a chance at a full blue with a varsity event against Cambridge in the summer.

The go karting provides for a “relaxed and fun” opportunity to get involved in a fairly unique experience. Anyone can participate. To sign up be sure to fill in the team’s membership form found on their website, join their facebook group where all events are posted, and also sign up to their mailing list.