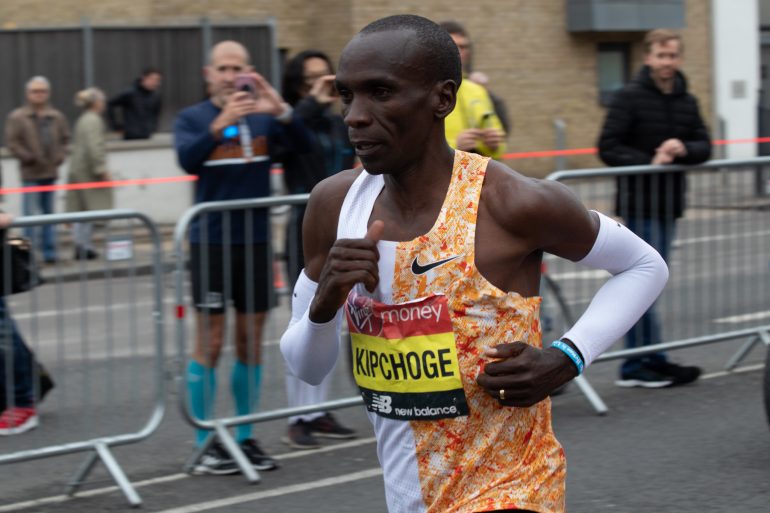 Recently Kenyan athlete Eliud Kipchoge made history. Whilst racing around the streets of Berlin, he shattered the marathon world record by 30 seconds, running the 26.2 mile course in 2:01:09. This race cements Kipchoge as the greatest marathon runner of all time. But who is the Kenyan and why does this record matter?

For those unfamiliar with the sport of long distance running, going on a run for over two hours might sound slow. A plodding jog. It was the apparent ease and comfort with which Kipchoge cantered around Berlin while making his kilometre splits of consistently below three minutes which made his run all the more impressive. Running each 5km split across the 42km race around the 14:30 mark. That’s lightning fast.

The Kenyan is no stranger to breaking records. Having grown up in Nandi County, he quickly became a distinguished middle distance runner. However, his real success would come after transitioning to the marathon distance. His time at this years Berlin marathon broke his own record which he set at the same event in 2018. He won gold at the 2016 and 2020 Olympic marathons, and has won the London marathon and the Berlin marathon a record 4 times each.

Out of 17 marathons entered in his career, he has only failed to win two of them.

In the 2019 INEOS 1:59 Challenge, Kipchoge partnered up with brands such as Nike in a special event, geared towards facilitating the Kenyan running under the storied 2-hour mark at a marathon distance. On a crisp October morning in Vienna, Kipchoge ran the full distance in 1:59:40, smashing the 2-hour mark and undoubtably making history. This feat sent ripples across not only the world of sport but across mainstream media at the time. However, given this run was so impressive and was faster than his time last week, it perhaps begs the question: why does the recent world record matter?

At the 2019 INEOS challenge Kipchoge was the only athlete competing, doing laps around the same park in Vienna, with a timing car driving in front and, crucially, interchangeable pacemakers. This decision undoubtedly enabled him to run faster for longer, but also voided the time from being official. This is why the recent world record is so significant. It proves that under regular race conditions the Kenyan can still perform and make history. He ran the first half with such speed that many commentators speculated that he might even dip under the 2-hour mark in that race. Unfortunately, Kipchoge couldn’t sustain his blistering pace and slowed slightly in the second half. Perhaps this results from his age: now 37, his days of elite marathon running are numbered, and despite appearing to bounce along the road with ease and comfort, it remains to be seen whether he can sustain this level of performance in the next few years, or even break the fabled 2-hour mark himself.

Almost all sports have fierce debates surrounding who should be crowned the Greatest Of All Time, with partisan views expressed, friendships tested and consensus rarely reached. Jordan vs LeBron. Federer vs Nadal. Messi vs Ronaldo. Kipchoge is the exception to the rule. Runners such as Haile Gebreselassie and Kenenisa Bekele, both of Ethiopia, are strong contenders, and of course, in the women’s event, athletes such as Kenya’s Brigid Kosgei and Britain’s own Paula Radcliffe have each made history.

However, last week’s race proves that Eliud Kipchoge should still be held as the GOAT of marathon running.