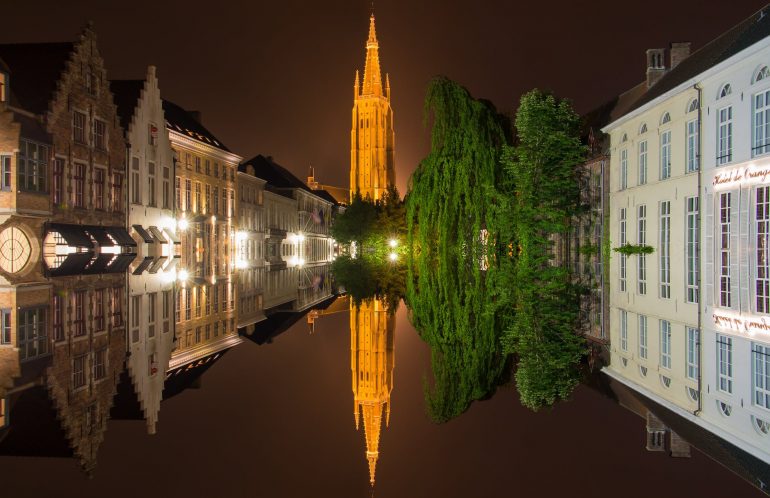 Worth a Second Look: In Bruges

There's more to McDonagh's cult film than meets the eye

Martin McDonagh’s 2008 flick In Bruges is sure to entertain almost any viewer, unless for some reason it doesn’t. Outstanding performances and chemistry from Colin Farrell and Brendan Gleeson ensure the film remains engaging in the midst of a deliberately slow-moving plot. While the great acting, very black humour and top-notch score certainly make a first watch time well spent, there’s a lot more there to be uncovered, and therefore it’s…worth a second look. See what I did there?

In order to really get into the good stuff of McDonagh’s masterpiece, let’s first turn our heads towards its setting: Bruges/Brugge depending on who you ask. Even Gleeson’s character Ken questions this, deeming their location “a bit fucking over-elaborate”. Bruges is one of the best preserved medieval towns in Europe, as the film will tell you, and many of its central landmarks are in a distinct Gothic style, with gargoyles and spiky things (buttresses?) all over the shop.

This creates an imposing, almost hostile atmosphere for the plot to occur, and the immensity of the surrounding Gothic buildings provides a sense of ambivalence between them and the people around. A perverse feeling of powerlessness emanating from the stunning structures cloaks many of the film’s shots. This ties in to the central point of deeper meaning in the film, that of purgatory.

In Bruges begins in medias res, with the two Irish hitmen arriving, guess what, in Bruges, but it is soon revealed through flashback the reason they’re there. The pair had just done a job in London, Ray’s first ever (Colin Farrell) but another one of many for Ken, where they were bid to assassinate a priest. In the act, Ray mistakenly shoots a young boy through the priest before being whisked away by Ken. Their boss, Harry, sends them to hide out, and again, in Bruges!

Bruges is a liminal place, a foreboding entity waiting to cast its judgement upon them, sending them in one of two directions.

Due to the added casualty of the innocent child, they have been sent there to await further instructions. They don’t know the duration of their stay, just to be in the hotel when Harry calls. For them, especially Ray, Bruges is a liminal place, a foreboding entity waiting to cast its judgement upon them, sending them in one of two directions.

Besides the architectural aspect of the film’s aesthetics, the colour palette is also altered. There are no bright, striking colours, simply the contrast between the two hitmen’s black overcoats, the dark grey and brick of the buildings around and the occasional yellowish hues of an old lamp. Watching the film feels muted in some respect, devoid of eye-catching flourishes. Exactly how purgatory is meant to be.

Every purgatorial allegory does of course also need its judge, jury and executioner. This is Harry, the foul-mouthed cockney crime boss who’s played by Voldemort. He is introduced gradually, first simply through his voice over a message, then his voice and mouth, then his voice and mouth and body. A classic dramatic build-up. Yet the expectations of some fearsome mafioso are subverted to an extent, Harry coming across as both dangerous but also a touch ridiculous in his constant f-bombs, erratic gestures and “c*nt kids”.

I’d grab a still of it if I wouldn’t get sued for copyright.

It is then both the city and Harry, travelling over from the UK, who claim the responsibility of the characters’ moral judgement and deliverance. As Bruges is filmed under some sort of dulling filter, as is Harry. The first time he’s on screen is one of the most remarkably and oppressively grey, muted shots I’ve ever seen. I’d grab a still of it if I wouldn’t get sued for copyright.

Imagery along these lines from medieval art is littered throughout the film, from gargoyles to portraiture. In the flashback of the boy’s murder he seen to be holding out a list of his sins, and the very next scene begins with the pair of hitmen looking at the diptych Death and the Miser, which depicts the exact same situation. Elsewhere in the Groeningemuseum the audience are shown the Bosch triptych The Last Judgement as well as The Judgement of Cambyses, both clearly conforming to the themes of purgatory and judgement running through the film and pretty cool pictures too.

The genius of McDonagh lies in the gradual release of the characters’ backstories and the subtle significance of things like the architecture, colour tone and paintings that represent the topoi that provide the deeper level of meaning and intrigue to the film. On a first watch, it’s the Irish accents, “the Vietnamese” and “the alcoves” that may stand out, but when you take a second look the complexity and brilliance of the film really shine through.

Image decription: a lit up clocktower is reflected perfectly in a moonlit canal lined by quaint houses