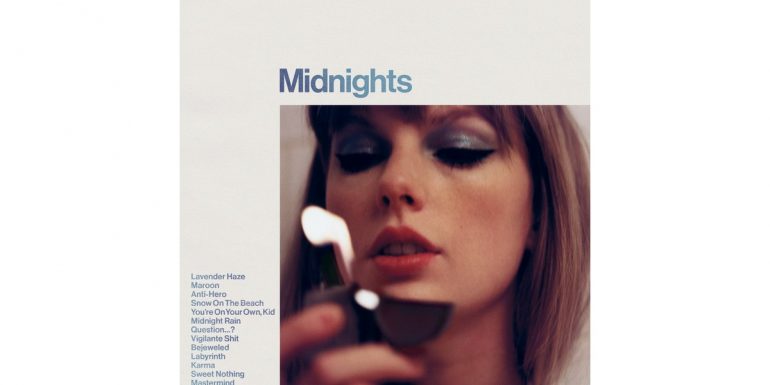 Around the world on Friday 21st October, Taylor Swift fans mired themselves in the singer’s latest album Midnights, having been tantalised by short snippets of information about the record ever since Swift announced it at the MTV VMAs in August.

Promotionally-speaking, Taylor’s latest release was both a breath of fresh air and a return to form. In an era of surprise drops on streaming services, lead singles being given barely a week to breathe before the whole record comes crashing down onto the market and album cycles lasting half a year at most, Midnights was traditional and subversive in equal measure. Having helped to perpetuate many of these industry trends with the surprise releases of Folklore and Evermore in 2020, both of which did not even have a pre-release single, and the short-lived focus given to her re-recordings of Fearless and Red in 2021, Taylor seems to have developed a pattern of promotion all her own. While fans scramble to analyse any nugget of information and cross-reference it with an absurd quantity of past statements, performances and events, she sits back and revels in her ability to spread the word about her music without lifting so much as a finger.

The alien approach of Midnights borrows from her own past eras and those of fellow stars. Swift announcing her new album after winning the VMA for Video of the Year is a move perfected by Lady Gaga over a decade ago when she, standing next to Cher in a meat dress with tears rolling down her cheeks, announced that her second album was named Born This Way. The gradual reveal of the tracklist via her TikTok series, Midnights Mayhem with Me, borrows from the late-2010s trend of having fans ‘unlock’ song titles by streaming tracks or music videos a certain number of times; she has augmented this method for her own album cycle, removing the laborious work of the fans because, after all, there was no content for them to stream in order to unlock anything. Back in August all they had was a placeholder album cover and the number of tracks – thirteen.

Following in the footsteps of three of the four albums Taylor released over a two-year span, Midnights had no lead-in single. For most artists this would be a risky move at best but given that Swift still managed to score a number-one hit on the US singles chart for two of these three single-less LPs it’s unlikely to be a major concern for her. For Folklore and Evermore Swift would’ve been unable to promote them to a major extent anyway given the constraints of the pandemic, but the lack of insight into this introspective album’s sound prior to release feels more tied to theme and aesthetic than practicality in this case. To be fair, the last time Taylor extensively promoted an album prior to release, with extensive interviews, advertising deals, live streams, music videos and more, was for 2019’s Lover which did not pay dividends comparative to some of her other eras.

For the past few years Swift has made herself into something of a hermit, only rarely coming out to promote her works beyond a few social media posts. Part of that is because she doesn’t need to do the legwork that characterised her early career anymore – people will listen to her music regardless of how much they hear from her before it comes out – and another part may be that, seeing the success that her lockdown albums achieved with little promotional force behind them, it doesn’t feel worth it to her at this point. It’s unlikely we’ll see another set of her Secret Sessions, where she invited her biggest fans to her house to hear 1989, Reputation and Lover before their respective release dates. She values her privacy over publicity – and rightfully so.

It’s notable that Taylor now seems to prefer one jam-packed explosion of promotional material when she releases an album instead of a sustained cycle of announcements over a lengthy pre-release period. On social media recently she laid out a week of media appearances, music video premieres and social media partnerships to promote Midnights, and though she is also expected to tour the album next year it is likely that these few clustered days of publicity will be the most comprehensive advertisements for the record.

Not every song can be Sia’s ‘Unstoppable’ or Beyoncé’s ‘Cuff It’.

It is a common joke among Swifties that Taylor barely promoted Evermore after it came out, but this one-and-done strategy is commonplace in the world of music today. It is very rare for any artist to have an album attain much commercial success beyond its debut week – you have one chance for the LP to peak as high as it can on the charts before it enters freefall, the same going for singles – and though Swift is obviously a massive commercial force in the industry the nature of streaming and easy access to new music means that Midnights and its songs will likely not peak higher than they will next week. Granted, it’s difficult to attain a spot higher on the charts than number one but for songs which debut lower on the charts it is unlikely they will have a post-release resurgence. Not every song can be Sia’s ‘Unstoppable’ or Beyoncé’s ‘Cuff It’.

Taking a look at Taylor’s rabid fanbase, one peculiar element of promotional cycles seemingly exclusive to Swiftiedom is fans realising Taylor was hinting at a future release after the fact. She is well-known for dropping easter eggs throughout her media appearances to keep fans on their toes and often these hints are unremarkable until the actual album comes out and the lines can be drawn.

A viral tweet posted on 20th October showed how Swift included some lyrics from Midnights in her acceptance speech when she received an honorary doctorate in Fine Arts from New York University back in May, months before anybody even knew about Midnights. “I CAN’T STAND HER”, the tweet reads; Swift’s undetectable advertising antics seem to bring fans both delight and disbelief.

Taylor Swift has come a long way in the sixteen years since her self-titled debut when it comes to self-promotion. Whether it’s a series of snake videos posted after a social media blackout or an album being dropped with only a few hours’ notice, the singer has evolved into the ultimate promotional machine, varying her tactics just enough to keep fans guessing with each rollout.

The fact that she can still come up with innovative ways to broadcast her music to the world is a testament to the adaptability and credibility of Swift as a commercial product. She’s here to sell and her fans will always be there to buy up whatever’s on offer, even if it’s a two-word Instagram caption. She can kick back and relax safe in the knowledge that success is assured for Midnights no matter what she does, yet she delights fans by still showing up for a few more interviews, a few more brand deals with Spotify and Amazon. She could become a Beyoncé – in fact she’s halfway there already with her recent rollouts – but she doesn’t ever want to truly let go of the fans who put her in this position.

With that being said, if Swifties somehow haven’t already been screaming this into your ear for the past month or so, stream Midnights.