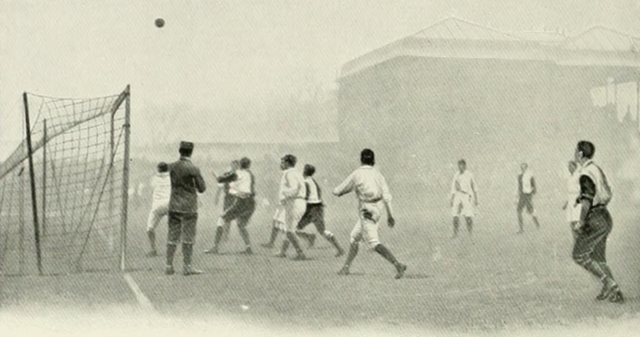 In the Captains' own words

We at the Oxford Student Sports Team asked each of the captains of teams in this year’s Mens 1s Football Cuppers to give us an insight into their teams, and explain why their College has a chance of winning this year:

Behind every great side is an even greater set of minds. Our squad is full of hardworking and skillful individuals who have the ability to execute the flawless tactics that emerge from hours of scrutiny and analysis. We model our style of play from as far back as the 1989 Sacchi AC Milan team, and this is what will carry us to Cuppers glory.

Within the red bricked walls of Keble College, a storm of footballing talent is brewing. After a relatively successful cuppers campaign last year, which was only halted by soon crowned champions Jesus in the quarter finals, KCFC has gone from strong to stronger over the summer. As a new brood of talented freshers fill any gaps and weaknesses in the first eleven, Keble Football certainly has the potential to rise to the top of the college football world.

Hertford College Association Football Club is arguably Oxford’s finest footballing institution. Facing the mighty maroon at the Marston Road ground is akin to lining up against a Real Madrid side with noodle hair Ronaldo. Like those glorious Champions league nights, HCAFC come into this year’s Cupper’s campaign with equally determined intentions. Under captain Phil Evans Alcantara’s leadership an injection of Spanish flair will see an adoption of La Selección footballing philosophy.

After last year’s agonising Cuppers exit, the much maligned MGA return to the 2022-23 tournament with a vengeance. The squad, now stronger than Ethiopian coffee, is brimming with fresh talent, champing at the bit to pull on the famous mint green. Impeccable hairlines, Blues athletes, above average chat and some serious ball handling skills amount to a pretty formidable side. So Oxonians get ready to be spoiled like an only child – cuppers is switching shades of green.

Oriel football had an unprecedented run last year, being promoted from Division 3 to Division 2. Despite losing half of our first team from last year, on the bright side, we did retain half of them too. More importantly, we have had a great addition of freshers who are eager to contribute, and it is with this eagerness that we believe in our chances in the Cuppers. Floreat Oriel.

What is St. Hilda’s football, if not poetry in motion? The liquid passes, flowing like the Cherwell, across from Hall; football played on the edges of possibility. Forget War and Peace, Hilda’s football is a masterpiece. With an 11-1 league victory to kick off the season, and an extremely strong cohort of freshers to fight for places, Hilda’s remain a serious prospect in the fight for cuppers success. We enter cuppers without a quad, but with a dream. The cuppers trophy, after all, belongs in OX4.

After losing a number of players over the Summer, this year’s Pembroke team is currently in a rebuilding stage with a number of freshers and fresh recruits from the older years having to quickly adapt to their new roles.  Logic and rationality would not give us much hope in Cuppers this year but we’ve always relied on guts and gumption over talent or skill so that doesn’t faze us in the slightest.

Lincoln College is looking to make a big impact in this year’s Cuppers. In what proved to be a disappointing season last year, the team failed to progress past the first round after a nail-biting 3-4 loss to Wadham College. Hoping to bounce back, Lincoln’s XI now boasts exciting talent amongst its cohort of freshers. Watch out for striker and former Nottingham Forest academy player, Peter Braybrook, who has already bagged himself a hat trick this season.

We’re Corpus Christi, we’re very small and very friendly, and we have absolutely no chance of winning. We’re in this competition for a good time, not a long time.

Jesus College Football club. The Cuppers holders. With Gonzo Twos linking up Alfie Blues once again there is no chance that we do not retain the title. With the squad only becoming more confident game after game, every team is quaking at the thought of coming up against us. Teams will complain that Barts is too far away and it’s on such a slope but really it is just a fortress home to the mighty stags. And yes, the rumours are true… Ben Putland is old.

We are Trinity College Football Club. After a season of quiet deterioration we bring a team packed with hungry freshers, newcomers and veterans alike. We’re determined to give every team we face in Cuppers a fight they will remember – the only way we’re going out is kicking and screaming.

The Magdalen 1s this year are full of promise, offering silky team interplay and skills fitting Barça’s 08/09 season, playing in the black and white stripes of Juventus’ golden era. A midfield trio, pivoted by our very own captain Okondo and long-serving fourth years Hodgkiss and Fisher, boasts experience beyond even that of Real Madrid’s veteran midfield. Magdalen suffered heartache last year losing to a controversial ‘Hand of God’ moment from a corner, and this year have all the ability and heart to go all the way and challenge in a cup run.

Coached by the only German who doesn’t know what gegenpressing is, our style of play may be indiscernible but a record of 2 wins from 2 speaks for itself. Appointing a music student as vice-captain has our squad singing from the same hymn sheet whilst starting the Blues goalkeeper at centre forward embodies a team defending from the front. Despite only having one star on our shirt, this season we have a constellation of talent ready to deliver Cuppers glory to our loyal following.

Worcester College exemplifies football heritage. With five teams competing at the peak of their respective levels, it would be nothing short of disaster if our season finished without a Cuppers trophy or two. The firsts play a dynamic style of football, built on discipline and desire, and will certainly be looking to go all the way this season.

Cuppers is a highlight of the Oxford footballing calendar and the excitement is palpable for yet another installment of the long running competition.