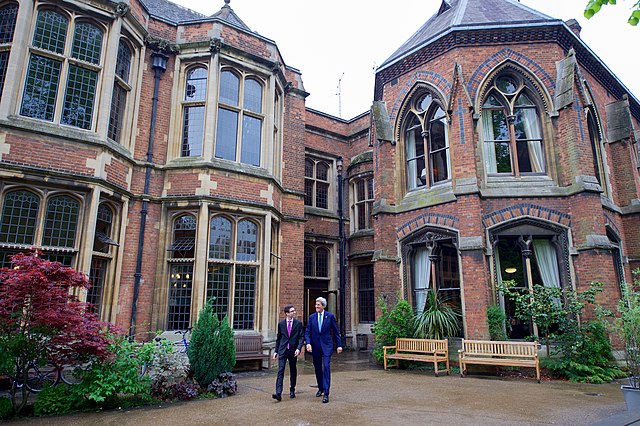 Union Secretary apologises for handling 'Socioeconomic Social' jointly organised with the 93% Club after appearance of men in white tie at bar.

Union secretary, Matthew Dick, apologises for his role in hosting their “Socioeconomic Social”, an event in collaboration with the 93% club on Saturday 22nd October, on the same day that members of the Apollo University Lodge, a fraternal group colloquially known as the Freemasons, were scheduled to meet at the Randolph hotel. This is the second time a “Socioeconomic Social” clashed with an Apollo Lodge meeting. This comes after a Hilary access event in which a large number of Freemasons were at the bar after one of their meetings. On the day of the event, there were four men in white tie visible at the bar, where the Social had moved, although it can not be verified that they were Freemasons.

The Freemasons of the Apollo Lodge are fully matriculated male students of Oxford who promote freedom of religion and speech, but also believe in a Supreme being, and “show demonstrably good characters”. Several Union committee members are known members of the Freemasons, including Senior Librarian Dr. Tim Myatt and several of the past and present returning officer team.

The club dinners, which cost £45, are held at the Randolph hotel twice a term and are often followed by drinks at the Union Bar, where the members attend in black tie, white tie or lodge uniform. The Lodge has in the past warned the Union on when thier events may be, and their website publishes these dates. This resulted in discontent expressed over the sight of men in white tie appearing at the “Socio-Economic Social” which was advertised as a way to “pay tribute to people from non-traditional socioeconomic backgrounds”, as per the Social’s Facebook page.

In response to the controversy, one governing body member of the Union told the Oxford Student:

“I’m disappointed it happened again (organisation of access social on day of Apollo lodge meeting) when we vowed it wouldn’t in Hilary [Term]. 93% Club put trust in us which we let down, and the Society seriously needs to reflect how important a priority Access should be, and how members would understandably react when we only host one socioeconomic social a term.”

He also added that, “Members have understandable frustrations, but I’m keen to focus on the Society making improvements and dealing with challenges appropriately”.

The 93% club also responded, telling the Oxford Student that:

“We are disappointed in the Union for not doing due diligence in organising the collaborative access social. This clash previously created an unwelcoming environment for our 93% club members; it’s a shame that this has happened for the second time in the past year.”

During the Union’s standing committee meeting on Monday, there were several debates between Union officials over who is to be held responsible for the incident. The President of the Union stated he was “unaware” of an external event being held, while the Senior Librarian, Dr. Tim Myatt, said the Union Bar had in fact “prepared” for the Freemason’s arrival. Myatt is a known member of the Freemasons.

The Socioeconomic Officer Connor Egan reported that “four white tie men were seen loitering in the bar for ten minutes” after the socioeconomic social had been moved there from the Goodman room on the joint approval of the Socioeconomic Officer and Secretary. The officer went on to say that “no one complained” about the men at the time of the event but that there were people unhappy afterwards.

Prior to the meeting, the Oxford Student obtained excerpts of internal private messages of Union members while organising the event, in which the Union Secretary wrote “I am a Freemason” and “I will crash the social this year.” Given this information, the Oxford Student asked the Secretary of the Union Matthew Dick to clarify these comments, asking whether someone can address the accusation that the secretary ‘joked’ about ‘crashing a social for working class students in white tie’.

In response to this, the Secretary said, “Over the vacation myself, the Director of Communications, and the Chair of the Consultative committee had a group chat where we would talk about scheduling events. We had been aware in the past that Freemasons have crashed an access event at the Union”. The Secretary also stated that earlier in the group chat he had mentioned encountering a Freemason event in London and as a joke, said “Now I have inside knowledge of how it works.”

The secretary went on to say “In hindsight, I can understand the upset this [has] caused and I am very sorry this happened, and in no way did I intend to crash an event I had organised.”

In a separate response to the Cherwell, one Committee member said, “[Matthew] is in no way a Freemason, which made this joke particularly funny. It was understood at the time and in the context by everyone in the group chat to be a joke and is still very much seen as [a] joke.”

Responding to this controversy, Jenni Lynam, Co-Chair of the Class Act Campaign stated,

“Spaces in which people like those that both the 93% Club and Class Act represent are so important to foster a sense of inclusion and comfort. To undermine this is extremely harmful and demonstrates a total lack of attention and care to a community whose place in Oxford has always been contested”.

When asked to comment by the Oxford Student, the Oxford Union replied:

“The Oxford Union held an Access Social on the afternoon of Saturday 22nd October 2022. The event was held in the Gladstone Room between 2-4pm. The event was well received and a great way to share more about how to get involved in the Union. Our Socioeconomic Officer received no complaints about how the event was run. There was no ‘Freemasons meeting’ taking place at the Union. Some members opted to wear black tie for a debate that took place that evening, with some choosing to enjoy the rest of their evening in the Members’ Bar. The Union welcomes all members from all backgrounds to take part in the many events that the committee has worked tirelessly to put together.”

According to a report by Cherwell, the Union is planning to issue a formal apology that has pledged that an incident of this nature will not happen a third time.