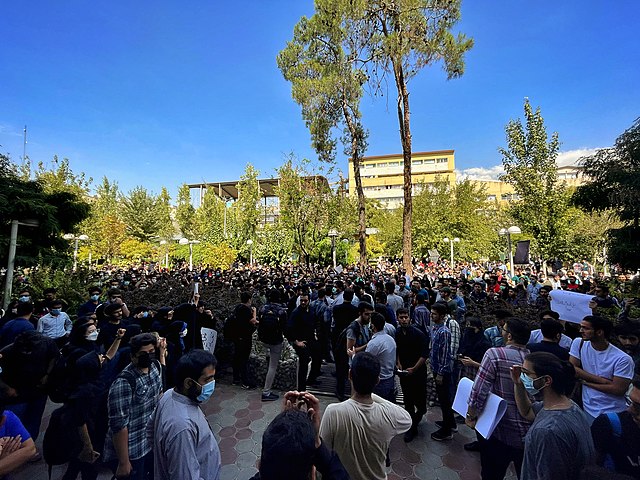 Despite the crackdown, the Iranian protesters give me hope

When the English philosopher, John Gray, went on BBC Radio Four’s Desert Island Discs to talk about his life and his ideas he was confronted with the criticism sometimes made of him. When asked if he is not “overly pessimistic and overly dismissive of other views,” he replied that he does in fact have “a clear, strong and in its own terms ‘hopeful’ view of the world, not optimistic.” Because “there is a difference” he insisted. He explained that “an optimist is someone who thinks they can find strong reasons for a positive view of the human predicament. I think that the human predicament is hopeful because the very absence of such reasons evokes the best in human beings, which are: stoicism, self-assertion against fate and resistance to aspects of one’s environment.”

I always pause for thought when I hear those words. He poses a paradox that despite the world being in serious trouble, politically, economically and ecologically, one could argue that essentially ‘we will be fine’ because all these challenges bring out the best in us.

And recently I got a glimpse of what this argument may mean in practice by the current wave of anti-regime protests in Iran. These protests by the brave Iranian women, men, university students and even school children have risen in reaction to the death of 22-year-old women, Mahsa Amini, in custody of the Iranian dictatorship’s ‘morality police’. An example of ‘self-assertion against fate’? A form of ‘resistance to aspects of one’s environment’? You could say that John Gray’s formula of hope (but not optimism) can be found on the streets of Iran.

Thousands of Iranian women have taken to the streets since the middle of September to protest against police brutality, the mandatory hijab laws which have been in place since Iran’s 1979 revolution that gave birth to the present theocratic dictatorship. Chanting “Death to the Dictator” as well as “Zan Zendegi Azadi” (meaning Women, Life, Freedom), they call for nothing short of regime change; the overthrow of the establishment which has so systematically discriminated against them for so long. Could this be the beginning of a feminist revolution, in which women and men protest together? Could this be the beginning of the end for the Islamic Republic in Iran?

These protests are more geographically and socially diverse than before. They include the notoriously religious cities of Qom and Mashhad (which host famous Shia shrines); places where one could safely assume to have been safe constituencies for the Iranian regime in the last four decades. Unlike previous ones in 1999 or in 2009 they no longer call for reform of the system. Since 2017 the chants have included “Reformist or Conservative the game is over”, which has coincided with the political purge of the reformists, effectively creating a single faction one party state.

At the time of writing (23rd October) the protests have entered their fifth consecutive week.

Yet despite showing remarkable bravery, the odds are stacked against the protesters. The Iranian state has an estimated 360,000 strong security apparatus which is not afraid to arrest and torture dissidents or shoot protesters. The notorious Evin prison, where political prisoners are held, is reported to have been busier than ever, before parts of it caught fire on 15th October.

Despite the continuing crackdown, the protesters should give us all hope. Their current predicament is far from optimistic as the Islamic Republic is unlikely to be overthrown any time soon. But the future belongs to protesters: not the police state. The Islamic Republic faces a serious demographic challenge. Even with rough estimates, we can see that around 73% of the country’s population is younger than 44 years old, meaning that they know no other political system than the current theocratic dictatorship. And yet they are no longer as compliant and deferential to authority as their parents’ generation who lived through the 1979 revolution or the Iran-Iraq war in the 1980s. The current protesting crowds are made up of women and the so-called ‘Generation Z’. You could say that Iran’s TikTok generation is showing the world that they will no longer tolerate being told what to do by the clerical gerontocracy that rules Iran.

Another serious challenge facing the Islamic Republic is the health of its 83-year-old ‘supreme leader’ Ayatollah Khamenei. With reported ill health, there are questions of a crisis of succession where no ‘suitable’ successor is in sight when the moment eventually comes. The current President, Ebrahim Raisi (who came to power in a stitched-up election in the summer of 2021) was once seen as the groomed successor. Yet he has been uniquely incompetent and inarticulate, at times seeming to struggle to string up a coherent sentence in his native Farsi.

It isn’t clear how much longer the Islamic republic can sustain its regime of control and coercion. Faced with a younger, more radical and defiant population, it would have to test the loyalty of its forces and demand that they execute increasingly brutal crackdowns. Yet the harder they try, the more radical the population gets and the more they recruit (albeit inadvertently) for a currently leaderless opposition. For some time, millions of Iranians seem to have arrived at the same conclusion reached by those who lived under the Soviet Union before its eventual fall, telling themselves “We cannot go on living like this.”

And for those reasons and more, the predicament of the brave protesters in Iran may not be immediately optimistic but is increasingly hopeful!