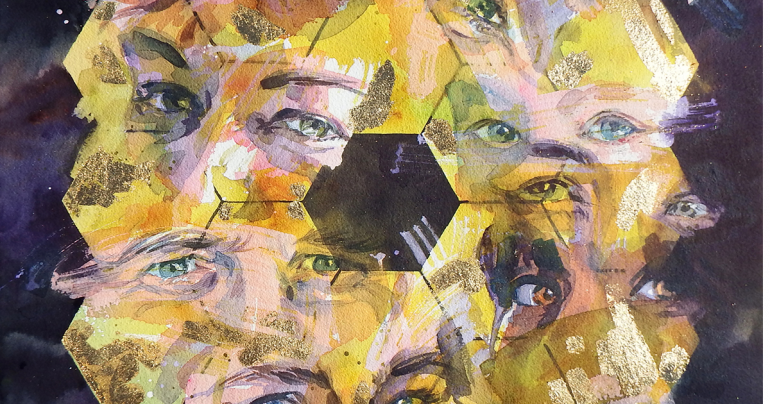 The James Webb Space Telescope (JWST) has conquered headlines in the past year or so, capturing the public’s imagination with its hotly-anticipated launch, high-stakes aims and the technical innovations required to send humanity’s largest-ever space telescope into the cosmos.

Why do we care, as a society, so much about astrophysics? Space holds meaning for humanity. For many, it is their one link to physics, barring anything else, because all one needs to do to access the wonder is wander out on a clear night and look up. The sky today looks much the same as it did to the Romans, or even farther back, to the very first humans. Over the course of millenia, we have looked to the sky for inspiration, for explanation – many of us know our “star sign”, regardless of our opinions on astrology.In this way, one gets a profound sense of time, upon staring into the stars, of how close we are to our own history, and how far away everything else in the universe seems to be.

And yet, we reach out. The edge of our own solar system is a lifetime away. The nearest galaxy, over a million generations (and that’s travelling at the speed of light). In spite of this distance, we offer a grasping hand, an olive branch. This is an essentially, exquisitely human quality. The JWST is yet another brush at the galactic dust, collecting the oldest light we’ll ever know and sending its secrets back down to earth to be unlocked.

Tales of space flight are, by nature, poetic. They are terrifyingly risky. They involve immense effort, collaboration and courage from a huge host of people. They transcend national borders and concerns because the whole is truly more than the sum of its parts. The launch of the JWST is the culmination of a project first conceived in the 1990s, but beyond that, it is representative of humanity’s curiosity and determination to probe for the most fundamental truths in our universe.

Before the Hubble had even launched, scientists at NASA knew that it would not be long before a Next Generation Space Telescope (NGST) would be needed. As technology evolves, things that were once considered distant hopes, like walking on the moon, very quickly fall into focus. However, there would be no Webb Telescope without Hubble. It is only through Hubble’s success that the idea of another, larger space telescope could be entertained; only through Hubble’s flaws that scientists recognised the requirement for a successor.

One of the most important parts of a telescope is its mirror. The same is true for telescopes in space. These collect light from a wide area and reflect it towards the detector and in this way, swathes of space are surveyed. Another thing: anything we send into space must fit on top of a rocket ship. This limits size, and it limits weight. Evidently, the main challenge to overcome, if we wanted a telescope that could see deeper and more clearly than the Hubble, was mirror size, and hand in hand, the mirror’s weight. It seems like an impossible question: how do we make something wide enough, light enough, and somehow small enough to be aerodynamic atop what is, essentially, a huge stack of dynamite?

Thinking about this is what eventually bore the hexagonal, segmented beryllium structure of the Webb Telescope’s primary mirror. The trick was this: the mirror need not be in one piece, if you are willing to have moving parts. This is quite the caveat, but it works, with the assistance of unfathomably precise motors. If the alignment is off by even a hundredth of a millimetre, the light will interfere and the mirror would no longer function as one, but multiple. It is apt that engineers, being artists here, chose the honeycomb. The mirror is golden, because it needs to reflect light of long wavelengths (in the “red” area). There is a gap in the centre for the light to be detected—the queen, with her corona in perfect alignment with the sun’s own.

Initially, the telescope was going to launch in 2007. In 2002, its name was updated to honour NASA administrator James Webb, who oversaw NASA’s first manned space missions through the Mercury and Gemini programmes during the presidencies of James F. Kennedy and Lyndon B. Johnson. Webb was a controversial choice for the renaming of the NGST given his leadership position during the lavender scare (in which the US government dismissed homosexual employees on a mass scale) from 1950 to 1952. Controversy resurfaced particularly in 2021, and remains to this day, though the decision was made by NASA in late 2021 to keep the Webb name, citing that there was insufficient evidence to warrant changing it.

In 2011, the project was very nearly axed altogether. Already, it was years behind schedule and pathologically over budget: a financial shake-up at NASA left the JWST fighting for its place in future plans. Evidently, the project survived, and after years of refinement and re-checking, of pandemics and postponements, the telescope was ready to launch. In 2007, the partnership with the European Space Agency (ESA) was confirmed, the ESA’s primary contribution being the use of an Ariane V rocket.

The Ariane rocket took off on Christmas day, after almost two decades of delay, carrying precious cargo. But it all may never have happened: the JWST’s journey prior to launch was not without obstacles. It takes huge, unseen labour to make something flawless. The smoothness of the primary mirror segments themselves, in a way, make a perfect metaphor for the project as a whole. I cannot state it better than Pulitzer prize winner Natalie Wolchover, in her article for Quanta magazine: “Its surface must be so smooth that, if the mirror were the scale of a continent, it would feature no hill or valley greater than ankle height.” Such is the painstaking perfectionism that has gone into the manufacture of the Webb telescope–and that is just one component. Like many things in physics, it is difficult to fully imagine, but one can certainly appreciate its vastness. What is mindblowing is that this mirror was actually made, and is now hanging someplace in the sky.

The Webb Telescope is designed to overcome the main challenges we face at observatories on earth in order to see the very oldest stars in our universe.

We know that our universe is expanding, and these ancient stars are accelerating away from us. Over time, the light they sent out gets “stretched” — a phenomenon physicists know as redshift. In astronomical terms, the age of light is considered in terms of its redshift, with redshifts close to zero being closer and younger, and larger values, ranging from 0.1 to over 1000 being older and farther. The largest value is 1089, that of the Cosmic Microwave Background: faint ripples from the Big Bang. The redshift range the JWST targets is between 20 and 100. This falls into the infrared (IR) category of wavelengths, and it is this infrared radiation that we experience as heat. On earth, our own heat renders us blind to these frequencies: how are we supposed to distinguish old, redshifted signals from similar wavelengths we emit ourselves? It is like throwing salt and sugar in the same jar and trying to tell them apart using only our own, unaugmented eyesight.

To escape earth’s own body heat, Webb hangs in orbit in such a way that both the earth and sun are aligned behind it, as it looks out into deep space. Here, with a tennis-court sized heat shield behind it, it cooled to the incredibly low temperature it needs to be to detect the faintest radiation from distant, long-dead stars. Webb’s journey is a tale of extremes: extreme cool, extreme age, extreme precision, extreme patience from an extremely large and dedicated team of people. It is beyond harsh, much like the vacuum of space itself, hosting arid vast wastes and violent nuclear reactions; stars spinning at incalculable* speed, throwing out incredible heat.

No wonder, then, that it has captured the imagination of the wider public. It doesn’t take so much to connect with these things. All you ever need to do is go outside on a clear night, take a breath, and look up.

*Note: this is hyperbole. Physicists can and do calculate such things!

Image description: A painting of the hexagonal mirror of the Webb Telescope, superimposed with faces looking in various directions.