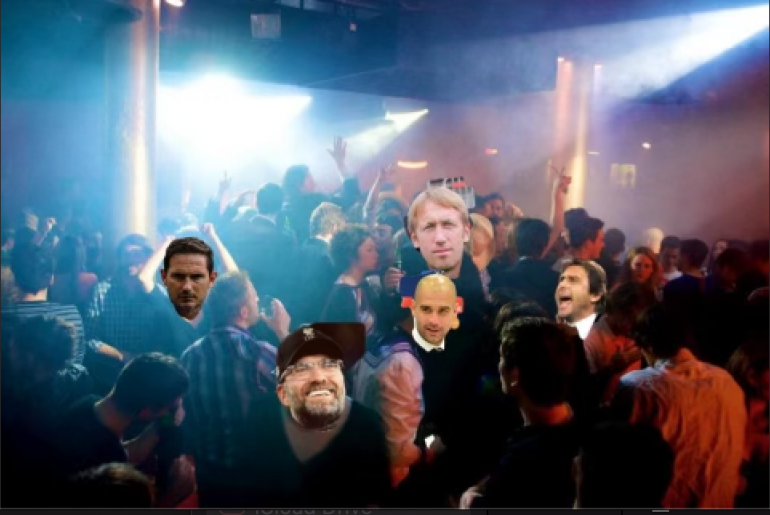 Pints, Pubs and Parks: What a night out with each Premier League manager would look like

It’s Dinner in Naples. Conte orders for everyone, doling out 2g meatballs. ‘We must learn to suffer’ he repeats. Food untouched and 6 packs of cigarettes deep Toni finishes his musings and you head out into the night.

Meanwhile round at Steve Coopers it’s a catch up sesh. He’s bought it all beforehand from the local Aldi. 11 sleepless days of Xbox, Carlsberg, 100 bowls of cheetos and Nottingham’s finest nightclubs until he has a psychotic break. Yelling bitter stories about this time at Swansea your best bet is to yawn and tell him ‘best go to bed Coops’.

Up in Leeds, Marsch buys a couple of kegs, hops into the Jeep and this the open road. ‘PONG PONG PONG’ he screams to a group of confused players. ‘It’s gonna be iconic y’all’. What follows is a dreary weekend in the rain. ‘DUDES, that was frickin’ awesome!’.

Elsewhere Gerrard’s got a black-tie do full of Phil Collins flashbacks and middle-aged angst. ‘Let’s get out of here’ he shouts. Stevie’s Range Rover tunes and Peronis lead the team to the local park, where they’re approached by a few young scallywags. Hardened stories of ‘the old days’ and ‘Istanbul’ follow, to no avail. ’What would Jurgen do?’ he thinks.

Out in one of MBS’ palaces, cider and Shisha are on hand through an ever more savage game of spin-the-bottle forfeits. Joelinton snogs ASM, MBS beheads a nephew, Eddie draws the line at writing a blog advocating mild social reform. “That’s proper dark, lads!”

In Manchester Eric has got the boys out. He refuses to go to Cristiano’s bar of choice, instead opting for the local Spoons. Shots and beers flow as the team become enamoured with their new Dutch maestro. ‘Ronnie’ he shouts looking across the table, ‘I’m the one who scores’ he says winking.

Meanwhile a ping goes off in the Merry Thomas Franksters WhatsApp followed by an impromptu dash down the M4. Bar then a rave in a decommissioned warehouse. 19 hours of dancing. ‘Totally f***ing dominated it’ he yells as he walks back through Kingston train-station.

Marco Silva has got wine on the river. A melancholy occasion he keeps on sipping till he’s yammering about ‘the infinite tragedy of existence’. He tries to run but you stop him. Then heal him.

Elsewhere Pep’s got his boys on a mountain poetry retreat. Wine and Wordsworth. 20 minutes in he’s in your personal space asking, “How is it?! It’s good? What you see?” You start explaining and melting at the same time. He dances around you. You go into the woods, and start running. Forever.

Out in an Air Bib in Kreuzberg Ralph Hasenhuttl is ready. Uber to Berghain for a 10-hour techno set from Marco Carola. Ralph’s buying everyone shots, ‘pay me later!’ as he heads for the dance-floor. You next see him at 7am, explaining counter-pressing to baffled Koreans.

Meanwhile, it’s German beers and intravenous-injected bratwurst chez Kloppo. Things get wobbly. He guffaws, teeth like a piano. ‘F***ing mentality giants!’. Cabs to Anfield. Giggling at grass for 6 hours. Hugs. The best day of your life.

In Leicester Brendan Rodgers has got the boys out for beers and pizza at the bowling alley. He bumps into an old pal and next thing you know you’re chatting to some media studies student at a hardcore rave in Peterborough, Brendan’s flushed, face covered in fluorescent glitter.

Down in Chelsea Graham Potter texts ‘meet at mine’. He has no intention of going out. When you finally do arrive he piles you with booze and controls the stereo religiously: Weller, Oasis. Everyone pretends they’re hammered.

In a park across town David Moyes is necking Dragon Soop. You walk around town accompanied with his ‘big dream’ chat. It’s’ quickly tempered with the realisation that this is all there is. Bit of shoplifting and head to a motorway to finish the drinks. ELO on full blast. Existential horror.

Down in Bournemouth, you go over to Scott Parker’s for fußball, pinball and ping-pong in the games room, selection of cheeses and wines for nibbles. Game of Triv. Ragingly bored. Scotty passes out, you draw on his face, then leave.

Back up in Liverpool it’s executive box and champers at the races. Lampard’s got it all covered. Iced Grey Goose at VIP tables. Frank looks immaculate. Buys everyone shots, but breaks the cardinal rule and sneakily paps you, banging it on Insta for bantz. You leave. With a bottle of Moët. On him.

Finally in North London Mikel issues strict instructions to avoid booze. He then ferries you to a medieval palace where, over 15 hours, he carefully administers pure opium in a 12th century ornamental pipe, taking you to ever higher plateaus of cosmic insight and tactical epiphanies. Exhausting.