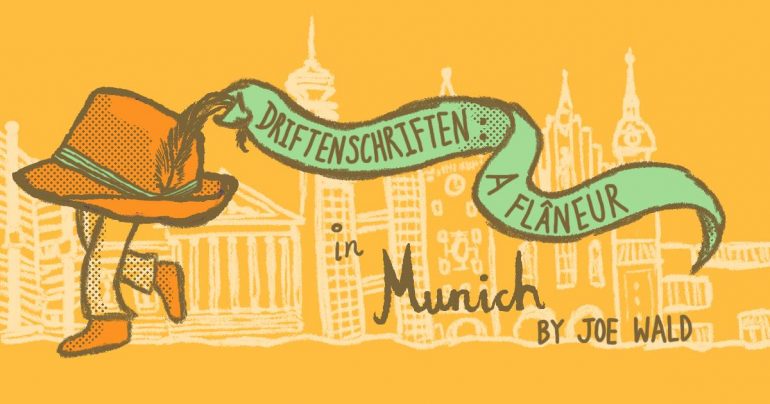 It is a fact of life that some freshers are sillier than others. So it is in the United Kingdom and it is no different in Germany. There are subtle, superficial differences: in Germany, a first-year student is not a ‘fresher’ but an ‘Ersti’, making ‘freshers’ week’ ‘Erstiwoche’, ‘freshers’ flu’ ‘Erstischnupfen’, and a ‘silly fresher’ a ‘Verkackverrückterungeschickterersti’, or ‘Absurdi’*. The broad concept, however, remains the same. Little bit too much, little bit too soon, a little too loud and a lot too silly.

My rebirth as a German Fresher was smooth and natural, like yoghurt, or Marvin from JLS. Since my first year at Oxford was COVID-coloured, I was unofficially a fresher in my second year as well, and it remains the role in which I feel most comfortable. Never in that time have I considered myself, or indeed been considered, particularly silly, but my abnormally long period as a fresher has made me feral, which, combined with my German language inadequacies, have given rise to extreme and unprecedented levels of silliness.

My rebirth as a German Fresher was smooth and natural, like yoghurt, or Marvin from JLS.

The manifestations of my silliness are many and varied. I have made remarkable discoveries about what speaking a foreign language does to the content of one’s speech, namely that I catch myself saying the most phenomenally boring things. Of course, it doesn’t help that every German, upon hearing that I am British, asks me my opinions on either the late Queen or the new, late Prime Minister, neither of which I have an awful lot to say about in English, let alone in German. But when my focus is not on what I’m saying but on the ‘Look, I’m doing it!’ of German conversation, I’m very happy to share with my flat the story of the time when I bought a pen three weeks ago, and the entire room (including myself) is blown away by how lethally uninteresting I am.

It tends to take me about 60 seconds to get into a rhythm when speaking German, making short exchanges with staff in shops or bars quite difficult. Scouring the streets of Munich for somewhere that would develop camera film, I found a shop that was simply and aptly named ‘FOTO’ (photo). Indeed, these four letters were huge and freestanding on a ledge above the door, positively unmissable. Hopeful, I walked in, looked the stern lady behind the counter in the eye and just at the critical moment, right when it mattered, I completely forgot the word for ‘develop’. It was exactly the word I needed and could not be substituted. This would not have been so big a problem had I not already been halfway through the sentence.

I felt my entire being fold in on itself and push downwards towards the earth. ‘FOTO’ was now the last place in the world that I wanted to be, and I concluded the least successful interaction of my life with a nod and a grunt and left the same way I came in.

Similar humiliation in the dry cleaners’ later that day; over the course of a short interaction, the owner justifiably lost almost all faith not just in my grasp of German but also in the possibility that I was capable of simple thought. Midway through a sentence, she gave up on informing me about what she was going to do to my coat and instead wrote the words ‘TWO DAYS’, large and capitalised, on a piece of paper and showed it to me while simultaneously shouting said words at me, slow and loud, in the manner that one might speak to a stubborn dog. Another nod, another grunt; I picked up my receipt and my trauma, left my coat and my self-respect at the till, and left.

Further silliness has given me, and you, faithful readers, much to look forward to. I have enrolled in two university courses which I will begin next week: the first is a Plato translation class taught in German, and the other is an A2 Italian course. Translating Greek philosophy into German, passing an Italian test that proves that I am not A1 (total beginner) but A2 (slightly less shit), having never read, spoken, or studied a word of the language before. This, in the country that is making me more socially awkward, irrational, and generally inept than I’ve been since infancy.

Just as a fresher is forgiven their silliness, so an Englishman his extreme stupidity, simply by virtue of the fact that he is giving it a go with the odds stacked against him.

But there is, of course, a flip to every flop, and this coin has, as so many do, two distinct and converse sides. When I’m feeling chipper, then the German language lends me more boldness and resolve than I would ever be able to achieve in England. The penny dropped only after a few weeks: I am not trying to convince every German person that I am German. In fact, in most cases, it works strongly in my favour if I make it clear that I am not. Because just as a fresher is forgiven their silliness, so an Englishman his extreme stupidity, simply by virtue of the fact that he is giving it a go with the odds stacked against him. Germany on a sunny day is a soft-play area for conversation, the language barrier a crash mat for all potential cock-ups and confusion, for arid anecdotes and lumbering awkwardness. With character flaws indistinguishable from linguistic ineptitude, I float on their breakfast blend of veneration and pity, and I am invincible. And so it becomes clear: as the towering waves of foreignness crash around me, my own self-image is my own worst enemy. My German is improving at a crawl but my tolerance for humiliation is coming on in leaps and bounds; somehow, this feels like the more valuable attribute.

*In the interests of avoiding a lawsuit, I should clarify that most of these words are not real or used by anyone (yet).

Image description: A cartoon of a traditional Bavarian hat with legs walking across an outline of the Munich skyline.