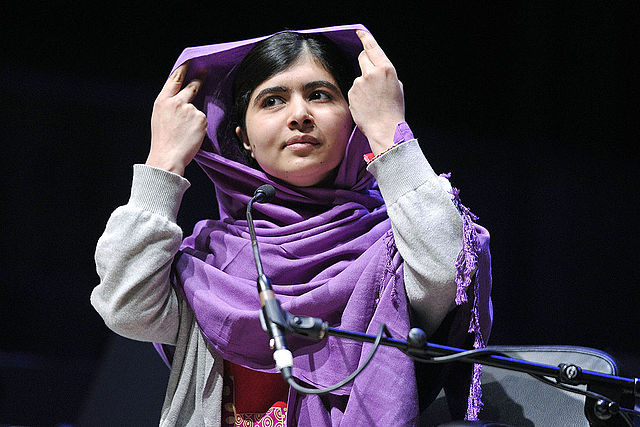 “I hope I see the day in my lifetime when all girls have access to education”: Malala addresses Oxford

Malala Yousafzai speaks about life after graduation, solidarity with women and girls worldwide and her new projects.

Education activist, Nobel Peace Prize Winner, and Oxford graduate Malala Yousafzai came back to her alma mater tonight to address a crowd at The Oxford Union.

There was much enthusiasm and excitement for her event. Queues for the 8pm address began over two hours in advance as students struggled to get a seat at what is seen as one of the highlights of the President Ahmad Nawaz’s Michaelmas Union term card.

Before her official address, Nawaz showed Yousafzai to a smaller meet-and-greet room and upon arrival she was met with applause from the room.

“The last time I spoke here was in 2013,” Yousafzai said, “I had no idea how Oxford and the Oxford Union worked back then but I did know I wanted to study here.” The recent graduate studied Philosophy, Politics and Economics (PPE) at Lady Margaret Hall (LMH) from 2017-2020.

The conversation between Nawaz and Yousafzai marks a historic moment as Nawaz himself survived a Taliban terrorist attack whilst at Army Public School (APS) Peshawar and has since spoken about youth empowerment, education and anti-radicalisation. The two have been well acquainted for a while.

“I honestly didn’t think I’d be back this soon but Ahmad is from the same province in Pakistan as me and in my culture, once someone you know invites you to something, you can’t say no.”

Yousafzai was joined by her husband Asser Malik whom she got married to nearly a year ago. Malik is a cricketer who now sits on the Pakistan Cricket Board, the country’s cricket governing body.

In the meet-and-greet, several students took the opportunity to share the personal impact Yousafzai had on them.

Ana Diamond, a human rights activist from Iran and Rhodes Scholar at Balliol College, mentioned how powerful she found it that Yousafzai publicly supported the cause in Iran. Yousafzai reaffirmed, “It’s not about the outfit a woman wears, it’s about the right for a woman to choose what to wear. We are all allies of Iranian women. Those on the ground are all hope for change as they raise their voice.”

Another student also shared that she was inspired to work in the field of education statistics after she saw the importance of Yousafzai’s work.

Yousafzai then made her way to the Union chamber for her official address. She began by reflecting on her time at Oxford, joking, “I visited the Union so many times. I’ve sat in nearly all the seats in an attempt to find which seat gives me the best view.”

More seriously, though, she had mixed feelings about Oxford. Whilst she was really grateful for the experience and really enjoyed her college and the friends she had made, she also added, “I’ll be honest – I do not look back. I always try to focus on the next things in my life.” She was candid about the workload pressure of Oxford and how often it was difficult to manage.

“There’s so much you learn here, but at the same time you realise Oxford has limits as well. It does not reflect the world outside.”

Born in the Swat region of Pakistan, Malala started campaigning in 2008, writing a blog for the BBC under a pseudonym and featuring in several international documentaries to highlight the tough situation in Pakistan. A few years later in 2012, she was shot by Taliban gunmen on her way home from school as retaliation for her activism. This started an international outpouring of support for her and eventually fuelled her rise to prominence as a global activist.

“We all have heard about the big wars around the world but those stories do not stay limited to news headlines. Those stories impact people’s lives on the ground.”

When the Taliban took over in her area at the age of 11, there was a lot of gender-based discrimination. “I had no option. I had to speak out because I could not imagine living like that forever. Silence meant that things would stay the way they were,” she said. Telling her story was a form of activism for her.

Yousafzai also touched on the issues in Afghanistan, the neighbouring country to Pakistan. “[Leaders] should ensure that the rights of women and girls are a non-negotiable in any negotiations with the Taliban.” She explained that children’s education in Afghanistan oftentimes lacks critical thinking and analysis, especially by way of science subjects. “When you take away some of these important subjects, it becomes not an education but rather an indoctrination,” Yousafzai declared.

Nawaz asked what ordinary people can do to help some of these crises. “Go and talk to people that are directly affected by these problems and they will tell you how best to support them.”

Yousafzai also commented on the United Nations and whether it is a good organisation for making a difference. “There’s always potential and possibility through these big international forums and if enough people are willing to come forward, they are able to make significant change,” the activist shared. She caveated this, though.

“I’d say it’s really important for [the UN] to bring people who are impacted by these issues to the stage” Yousafzai added. She elaborated that whilst the UN does comment on issues around the world, numbers and figures are not enough, and actually, it’s important for an audience to hear directly from people at the frontlines.

“I’m 25 now, I’m not a young girl anymore,” Yousafzai added, “But this year when I spoke at the UN, I took young girls with me.”

Yousafzai also touched on some of her plans for the future, including the recent launch of her production company, Extracurricular. This partnership with Apple TV+ last year has now unveiled the first line-up of film and TV projects including dramas, comedies, documentaries, animation, children’s series and more. The banner has already teamed up with Oscar winner Adam McKay’s production house on a feature film.

“I’m really excited about the production company. I believe we need to give the opportunity of storytelling to more people so they can tell us how they see the world”.

Whilst she highlighted all the work she was doing, Yousafzai also took this chance to give a down-to-Earth account of what she did in her free time at Oxford. “I’m a big fan of entertainment. I grew up watching Bollywood movies…and I’m a big fan of Cartoon Network.” She shared that she often found herself binge-watching her favourite TV shows like Big Bang Theory or Friends when procrastinating on her academic work.

Catching herself though, she added, “Focus on your studies guys. Make sure you don’t leave your essays to the last minute.” The chamber erupted in laughter.

Yousafzai also clarified some of her comments about marriage which had caused controversy in the press. In her British Vogue interview last year, she casually said, “I still don’t understand why people have to get married.” This led to widespread criticism, with social media users reminding her of her Pashtoon origin and calling her out for ‘promoting western culture’. However, since then, the newlywed has had a lot of reflection about marriage, especially with her husband, Malik.

“We had a lot of conversations about what marriage is, whether that be friendship or companionship. It’s really about two people deciding to live together to support each other.”

One student wondered if Yousafzai still had ambition to enter into Pakistani politics. Hesitantly, she responded, “Right now my focus is girls education. I decided at age 11 I wanted to become the Prime Minister but with time you realise there are limitations to what politicians can do and right now for me it’s all about activism and girls education.”

Yousafzai came full circle when she ended by speaking about those who inspired her, much like people had told her she inspires them. “I was 10 years old when I first spoke on television. At that time, my biggest inspiration was my father, Ziauddin Yousafzai,” she said. Yousafzai’s father is a prominent activist for education himself who protested against the Taliban as well.

Yousafzai concluded, “What really influences you and impacts you is the action you see around you.”