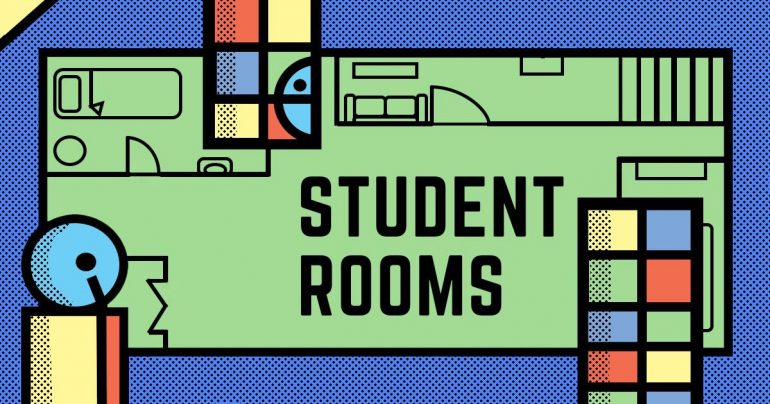 Student Rooms: The Art of Staying Over

I have always coveted my boyfriend’s hairbrush. It was the only thing that could salvage my ridiculously long, split-ended hair after sharing a cramped single bed with another human being and using shampoo that wasn’t mine. With this hairbrush, I didn’t need to tug even a little bit, let alone rip off worrying amounts of tangled hair – it brushed through effortlessly, sweeping away not only tangled clusters, but also that snug-yet-groggy feeling that arrived after having stayed over in a room that wasn’t mine.

My boyfriend, a fellow Oxford student from a different college, inhabited a room in a modern college accommodation building. En-suite, spacious and with huge windows letting in a generous amount of sun, it was a great single room.

Not everything about it was for one person, though. Take his set of shot and liqueur glasses, for example, from which we sipped port after I’d asked him if he wanted to be my boyfriend, and he’d answered in the affirmative. Or his impressive projector and audio setup, which we used in evenings chilling out to k.d. lang and Tom Waits songs or watching episodes of Twin Peaks. And, not least, his even more impressive stock of oatcakes, of which I’ve consumed quite a few.

But chilling out in someone’s room for an evening and staying over are very different things, of which the latter involves a whole new set of challenges. Or so I’ve come to realise. Here are a couple:

–       Struggling to remember to bring extra clothes and my toothbrush

–       Standing on tiptoe to look into his mirror, which only answered to tall people

As students, most of us are used to basically living alone, in various types of student rooms, unless you live in a shared house and cherish a very close, familial connection to your housemates (lucky you!). This is especially the case for myself, used to being so far away, for such long periods, from my family residence in Korea – a house that, at that time when I was visiting my boyfriend in that room, I’d never even been to yet. So you may imagine how the experience of sharing with another person living space, let alone a single student room, was new and frequently awkward for me. Different, too, but in a way more delicate and too elusive to explain just now. So I give you a brisk vignette instead, of the mornings in my boyfriend’s room.

I wake up. I try to see if he is awake, then hastily mould my bed head into a more reasonable shape. Given my hair takes longer to dry, I use the shower first while he ventures out to the shared kitchen to make us coffee. I struggle on tiptoes to use the mirror while taking advantage of aforementioned hairbrush, I wonder why he uses such immense towels (apparently the towels I’ve been using all my life after showers are hand towels), I sip coffee and consume oatcakes while he’s taking his turn in the shower. It all takes a great deal of coordination and teamwork.

Declaring I have an essay to write and asking to meet at a library in the afternoon, I leave – he lets me out of the block, still in his dressing gown. I walk down the pastel tones of Holywell Street, slightly self-conscious in yesterday’s clothes yet not minding the breeze brushing them. I experience a peculiar, tingling sense of zest. It is a feeling I never experienced from staying in my own room, no matter how conveniently immune it is from the humdrum problems listed above. It is a warming blend of budding attachment, premature excitement at returning and the understanding that, in this city and country, I may have found a room where I am welcomed, (patiently) tolerated and even cared for.