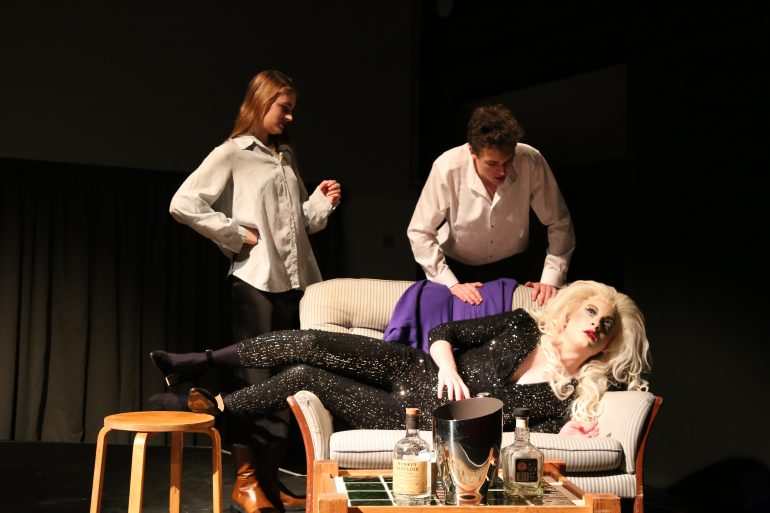 “Charles and Ruth Condomine are married and in love. No skeletons in the closet, no siree. But when they invite kooky medium Madame Arcati to their house to watch a séance, Arcati *accidentally* brings Charles’s husband, Evelyn, back from the dead. That is, objectively, not a good vibe; Theresa Caputo would never. So Charles is stuck in a house with his dead husband and his all-too-alive wife – what could POSSIBLY go wrong?!”

So says the Facebook event which encourages you to go and see director Alex Foster of A² Productions’ latest, and last, student play, Noel Coward’s Blithe Spirit. To answer the last question, after watching the opening night: a lot in terms of the plot, but nothing in terms of performance.

Adapting Coward’s original play to rewrite Charles as bisexual, with former wife Elvira now former husband Evelyn, removes an unsavoury aspect of the play – the latent misogyny behind the portrayal of two bickering women, bickering specifically over the affections of a man. Both spouses, in this production, are as equally silly as each other by the end: their respective gender is a moot point. It also, of course, offers ever-important representation of bisexuality, something not contested at all within the play. A portrayal of queer relationships where the queerness is not used as a plot point but merely accepted as a given was refreshing to watch.

And most importantly, without this adaptation, we would not have the nearly show-stealing performance from Daniel McNamee in the role of Evelyn. Swaggering onto the stage in a classic representation of the jealous ex-lover (albeit separated by death, not divorce, adding a layer of surrealism and originality to this commonly used trope), every expression and movement seemed natural and yet calculated for the role. And how could I forget his scene partner Sian Lawrence in the role of Ruth Condomine, whose dry humour bounced off both Evelyn and Charles to offer satirical and sharp exchanges which were highly amusing to watch.

I say nearly show-stealing, however, because in a completely inspired move, A² Productions cast in the role of Madame Acarti the fabulous Alfred Dry, otherwise known as Miss Take. And the show was undeniably stolen as soon as she strutted on stage in a platinum blonde wig the size of which would make Tracy Turnblad weep from envy, skyscraping heels and skin-tight clothing. In full drag (both appearance and character-wise), Dry offered the exact level of absurdity needed for Madame Acarti, the so-called ‘kooky medium’, to the point where you begin to wonder how it was ever performed by someone who was not a drag queen. Like going to see a play and getting a free drag show thrown in for the price, Dry’s performance alone makes it worth the ticket fee. But alongside an incredible cast of talented actors, each bringing their own beautifully executed comedic flair, it’s a play that will leave you giggling throughout.

A witty, lively send-up of married life and human relationships with a dash of eccentric paranormal activity, A² Productions’ Blithe Spirit is a must-see this term. It leaves us with the ironic twist, reflecting on the differences between appearance and reality of human nature, that the exquisitely absurd performance from Madame Arcati ultimately presents us with the most sensible character in the whole play – except, perhaps, the poor servant, Edith (Grace Gordon), who really just wanted to go to bed.

Blithe Spirit is showing at the Keble O’Reilly Theatre from 9th-12th November 2022.

Tickets are available at https://www.ticketsource.co.uk/asquared-blithe-spirit/e-rkmlyx?fbclid=IwAR0GeIV57wrvgq4ZIHebVgcDjF4ZkDqHTXH1tQvAh5Tw8UJTW8KPJDCAwJ4.