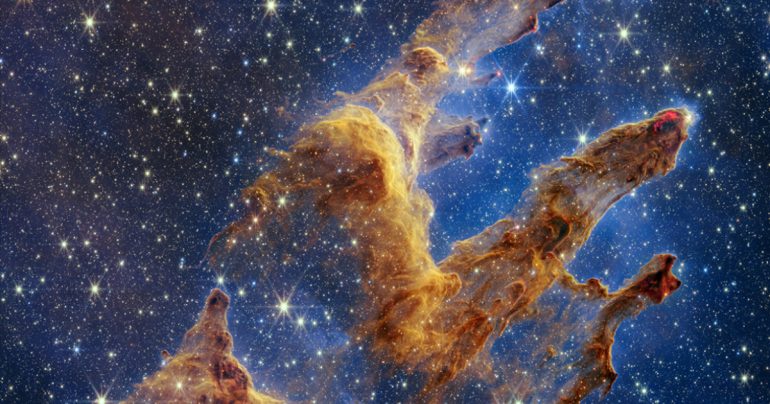 How does it all work? Zooming in on the James Webb Telescope

The James Webb Space telescope (JWST) has been sent up into the stars to help us answer questions about the nature of outer space. These questions span from cosmology, at the very birth of our universe (if there even was one!) to the future, with the telescope keeping a keen eye for planets that could, or perhaps even may already, play host to life. This task is not a simple one. Even the most keen-eyed person cannot see light in the infrared spectrum – therefore the procedure is not so straightforward as simply taking photographs to be analysed back on earth.

The secret is in the Integrated Science Instrument Module – known more comfortably as the ISIM. This is the heaviest part of the telescope, and the main reason it’s up there. The hexagonal pattern may look pretty but the primary mirror would do little for us without the help and processing of its instruments and cooling systems. The ISIM is composed of four main instruments: the Near Infrared Camera (NIRCam); the Near Infrared Spectrograph (NIRSpec); the Mid Infrared Instrument (MIRI) and the Fine Guidance Sensor combined with the Near Infrared Imager and a slitless spectrograph. All of these are the culmination of two decades of designing and fine-tuning to painful precision. The star of the show, behind all of these instruments, is the cooling system that makes them all work.

Other cooling technology – referred to as cryocoolers – are required to take some of the instruments to a lower temperature. Engineers faced one main challenge when designing this: the fact that the JWST cannot be serviced. The Hubble telescope is cooled using liquid helium, which is taken up to the telescope in shipments from Earth. This is doable because the Hubble is in low-Earth orbit, unlike the Webb telescope which sits some months away from Earth. Whatever cooling system the Webb used, it had to be something that did not consume resources, as finite resources limit the lifetime of the telescope. This, clearly, is where the innovation comes in.

The physics behind cryocoolers is hardly different to how our home refrigerators work. It’s the same principle: move heat from a cold area into a warmer one, operating against what physicists call the temperature gradient. Heat will naturally move from warmer areas to cooler ones, the trick of a refrigerator is to get in the way of this happening, consistently. Prior to the Webb, cryocooler technology happened, at best, in two stages. The Webb uses three stages, using its huge size to its advantage. A phenomenon known as the Joule-Thomson effect means that as a gas expands, it cools down. The Helium, cooled by mechanical means in the first two stages, expands on its way to the MIRI, moving from a temperature of 10K to around 6K, meaning that the MIRI can reach its operating temperature of 7K. It is able to expand because of the 10 metre distance between the cooler and the instrument, which also insulates the instrument from the vibrations of the cooling system.

The MIRI needs to be so cold because it is this that detects the longest (and therefore oldest) wavelengths. The MI stands for mid-infrared. As discussed in a previous article, these wavelengths are the hardest to detect, as oftentimes the instruments themselves can emit radiation (waves) in a similar range of wavelengths to the light they are trying to collect.

The MIRI includes both a camera and a spectrograph (device that measures the distribution of light according to wavelength) tuned to the mid-infrared range of wavelengths: it sees heat. This enables us to cut through the gas and dust surrounding far-off galaxies and resolve them in far finer detail than ever before. It is this camera that produced the breathtaking images we’ve seen thus far. These photos offer far more than their beauty, though: scientists use these images to find out more about far off-galaxies, comets and newly forming stars. Closer to home, images taken by MIRI are used to examine the Kuiper belt – a doughnut-like disc on the outskirts of our solar system which plays host to Pluto and scores of other interesting remnants of the early solar system.

These photos offer far more than their beauty, though: scientists use these images to find out more about far off-galaxies, comets and newly forming stars.

The second range of wavelengths cosmologists are interested in is the Near-Infrared (NIR) range, to which the two remaining instruments on the ISIM are dedicated. The infrared camera covers the wavelength range of 0.6 to 5 microns. A micron is a tenth of a millimetre – quite long for a light wave! For context, the wavelength of visible light is over 100 times smaller than these infrared wavelengths. First, the camera: ultra-sensitive, and importantly, able to look at the same little squares of space for a very long time. Secondly, the spectrograph, much like the MIR setup. The camera and spectrograph work together and have been designed to overcome the unique challenge of sending the JWST far beyond human reach for servicing. Unlike the Hubble, the JWST cannot be upgraded and so has a finite lifetime.

It’s important, therefore, to maximise the information we can glean from the pictures it takes. The telescope looks at 100 objects at the same time — this is the first spectrograph in space that is able to do this, and hugely increases the research capacity of the telescope. To do this, while also looking at each object for 100 hours, takes ingenuity, and that comes in the form of the “microshutter array”: doors, the width of a human hair, designed to open and close when a magnetic field is applied. These windows can be opened and closed independently of each other, to see specific portions of the sky — and in the same way block out interfering light that can prevent us seeing far-off objects. This principle is applied in a more macroscopic way through the NIRcam’s coronagraphs, which allow astronomers to photograph faint objects that are near to very bright objects, such as star systems. Coronagraphs block light from the brighter object that would otherwise obscure the dimmer one, and this is very useful for imaging exoplanets, which orbit stars other than our sun. All this said, you may well be holding an object quite similar to the NIRCam: a lot of the technology in this device is common to most handheld digital cameras.

And so ends the tour of the ISIM, 1 million miles away from the real thing: a display of the cutting edge of human innovation.

Click here to see a gallery of photos from the JWST.