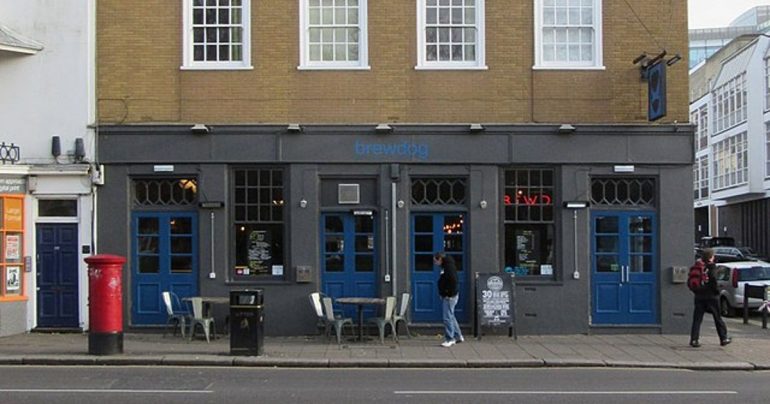 Brewdog with the perfect brew at Qatar 2022

How Brewdog are setting the example for corporate responsibility

What attracted me to buying my first ever Brewdog beer (a pint of Punk IPA), was the fact that their beer is carbon neutral. I must admit ignorance, I have no idea if this is the norm among beer producers or if this is a special achievement which makes them an outlier. It wasn’t until after I took my first sip that I understood why they have become such a dominant brand in recent years. It was actually good. For those not in the know, IPA is a style of beer that is renowned for its bitter taste and I profess to have tried many different IPAs in my life. While theirs is by no means the best I’ve ever tasted, indeed I proclaim the supremacy of Jaipur IPA, it is certainly among the best and most consistent, and their vast range of different flavours and brew types makes Brewdog beers an obvious choice anytime I’m drinking beer.

Brewdog is also a company that takes its social responsibility incredibly seriously, which is part of why it advertises so clearly its carbon neutral status. With the recognition that many football fans drink beer at matches or watch matches in the pub over a pint of the stuff, Brewdog has extended this responsibility to the realms of football. In the run-up to the Qatar World Cup, Brewdog announced a campaign against corruption and human rights abuse in this tournament and beautiful game more generally.

Brewdog is also a company that takes its social responsibility incredibly seriously,

This campaign includes donating 100% of sales of special World Cup-themed drinks cans in the run-up, as well as all sales of its Lost Lager, to human rights charities working in Qatar. They have named themselves as “Proud Anti Sponsor(s) Of The World F*CUP”, in this aim to raise awareness for widespread corruption and commercialisation of football at the highest levels. One doesn’t need to have heard of Sheikh Mansour or Roman Abramovich to understand that football is a sport that has become dominated by some of the world’s richest and most corrupt individuals, leading to decisions and actions which run counter to the experience of the fans who make the sport what it is.

My first introduction to football was through playing in the park with my dad. I grew up in the early days of the insurrection which has occurred in the sport, when everything seemed still to be about the beautiful game. It is a truly pure memory and experience I have of football, a sport which has given me some of the best and most exhilarating experiences of my life. Sheikh Mansour’s acquisition of Manchester City and their sudden rise as a global powerhouse in the sport was a symbol that something was changing in the sport. While as a Manchester United fan I remember Aquero’s last minute goal against QPR in 2012 as a terrible memory generally, it was also a symbol that football was up for sale, and the highest bidder could find success and glory for themselves.

One doesn’t need to have heard of Sheikh Mansour or Roman Abramovich to understand that football is a sport that has become dominated by some of the world’s richest and most corrupt individuals,

Qatar and the controversy surrounding it cannot be ignored as the culmination of a big shift. First the acquisition of Manchester City, PSG and others. This was followed by the successful bid of both Russia 2018 and Qatar 2022. Most notably, it was met with resistance with the European Super League and the sudden questioning of many football club owners in the aftermath. We all remember scenes of protest at Old Trafford or Stamford Bride or anywhere else where football fans stood up and made their voices heard as against the merciless decisions of billionaires aiming to make even more money at the expense of everything else.

How many times do we have to ignore the politicisation of our sport until we understand that we have to take a side, and that side must be the side of right?

Football seems exemplary of the general direction of the world over the past few decades and the future which seems inevitable. Greed has trumped experience and passion and enjoyment. Basic principles like the rule of law, human rights, and fairness have been ignored consistently for corruption, unspeakable crimes, and inequalities of a truly staggering size. I ask myself at what point will finally say that enough is enough and truly fight back against these developments. How many migrant workers have to be exploited and killed until we stand up? How many smaller clubs have to fall into bankruptcy? How many times do a small elite of teams owned by the world’s wealthiest have to dominate domestic and continental competitions? How many times do we have to ignore the politicisation of our sport until we understand that we have to take a side, and that side must be the side of right?

I end by saying that unlike most things, I don’t feel optimistic about the future of football. Whilst we can vote out those who would uphold a status quo in politics, I have no say unfortunately who runs FIFA or who owns Manchester United. Decisions will continue to be made for profit, and fans will continue to try and ignore the politics and just focus on what they love. They love the drama and passion. There is truly nothing which seems so special and exhilarating to a football fan than the World Cup. I’ll still be singing ‘Its Coming Home’ but every now and then I’ll remember the guilt of knowing how few have my luxury and privilege to ignore and love the beautiful game. Or as Brewdog have called it “The Beautiful Shame”.