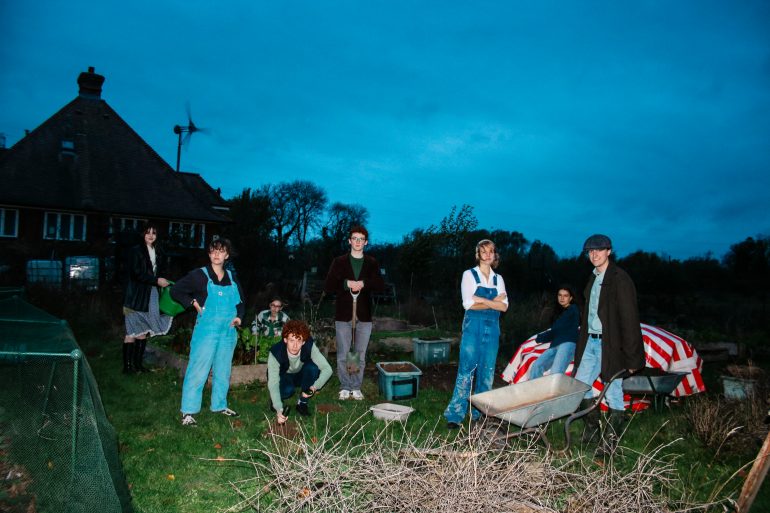 Courgette comedy meets the dark side of allotments

‘Fêtid’, written and directed by Max Morgan, depicts the twisted ‘microcosm’ of the allotment in all of its tragicomic glory. This setting, surprisingly, proved fertile ground for parody and poignancy in equal measure. Morgan’s play follows eight villagers in the build up to their much-anticipated fête. However, as the day itself nears their feigned decency and stifled passive-aggression is gradually replaced with dysfunctionality and deviancy.

The director’s note warns the audience of what is to come, describing allotments as ‘cesspits of jealousy’. This trope is not unheard of (think ‘Hot Fuzz’) but this did not guarantee the originality or comedy present in ‘Fêtid’. The success of this performance comes in its consistent balance between emotional gravity and irreverent levity. Morgan is at his best when he drives classic stereotypes to their absurd conclusions, exploiting them both for their surrealist comedy and darkly real repercussions. The audience’s giggles are silenced momentarily by moments of raw tragedy yet return in force as the play’s comic relief turns on a dime.

Morgan is at his best when he drives classic stereotypes to their absurd conclusions, exploiting them both for their surrealist comedy and darkly real repercussions.

Performed in the limited space of The Michael Pilch Studio, the staging would either be a challenge or an asset. The cast decided upon the latter, using the intimacy with the audience to sink their teeth into the comedy embedded in the script. A standout performance came from Cormac Diamond, whose portrayal of Mark epitomised the satire and surrealism of the play. Playing a courgette wielding alcoholic who is more married to his marrows than his wife, Diamond quickly and effectively found his comedic persona and timing within the space, responding to the audience’s enthusiasm for his many mannerisms. He charted the progression from decency to degeneracy with subtlety, eventually providing the play with some of its darkest moments.

However, it is difficult to choose an individual performance in a play which thrived upon the chemistry within the cast. Avania Costello’s role as Anna presented the audience with a refreshing source of emotional dialogue, drawing out her own character’s sympathetic nature whilst providing important expositional moments that tied the various fraught relationships into a cohesive plot. Millie Deere and Lily Carson (Chris and Sue) navigate this plot brilliantly, producing convincing comedic tropes without losing touch with the emotional significance of their roles.

Juliette Imbert and Edie Critchely are ferociously convincing as Polly and Yvette, compounded by the excellent performance of Tom Pavey as Jim. Portraying some of the more serious elements of the play, Pavey, Imbert and Critchely play off each other perfectly. Conveying the concept of interrupted rural and familial quietude with aplomb, their range ensures a balance between drama and light-hearted fun. The dashing Reverend Leaky (Sam King) is evidence of the nimble application of surreal comedic relief. His role as failed mediator and oblivious voice of reason provides the audience with believable yet hilarious interjections.

Who knew courgettes and sexy priests would blend so brilliantly with family dysfunctionality?

‘Fêtid’ is a shining example of the excellent debut student writing in Oxford, completed by an exceptional cast. Given the number of characters, Morgan does well to keep the play coherent without letting any one role seem insignificant or unnecessary. The production on such a small stage does not sacrifice the charm of the play, nor does the comedy overpower the tragedy (or vice versa). Who knew courgettes and sexy priests would blend so brilliantly with family dysfunctionality? Best not to question it and enjoy the play for what it is: absurd, funny yet emotionally real. Hopefully we will see Morgan and the cast members return in more Oxford drama.

Image description: the eight cast members of the play, dressed in dungarees and tweed, tend to their allotments outside a small house at twilight.