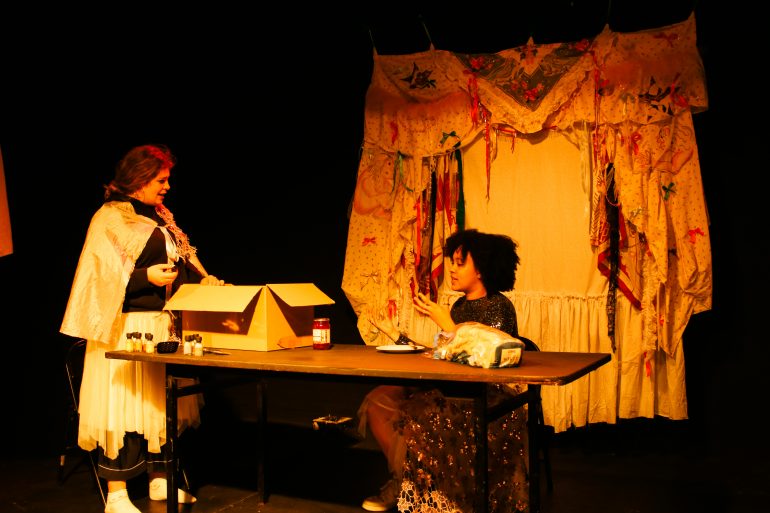 I recently attended one of Peach Production’s sold-out shows of their play Wishbone, starring Rosa Calcraft and Kaitlin Horton-Samuel. The play follows the tale of two lovers; Ro, sensitively interpreted by Kaitlin Horton-Samuel, and love interest Ti, deftly portrayed by Rosa Calcraft. It is set just hours after the couple has broken up, but are forced to spend seven days together following a positive COVID test. Despite Cuppers-winning writer Coco Cottam’s assurance that “it’s not a play about COVID”, I was hesitant as to whether the romantic sentiments of the play would be able to hold their own against the exhausted topic of COVID isolations. Although COVID is what sets the parameters for the play, the delicate portrayals of the characters’ inner and outer emotional conflict are what infuse it with artistic life. It was a relief not to sit and watch characters complain about the virus after the hold it has had over our lives in recent years. Instead, the audience is taken on a theatrical journey which explores inescapable boredom, proximity, and nostalgic love.

I felt as though I was stepping directly into a private, emotionally charged space which immediately promised action.

What immediately struck me on entering the theatre was the statement set which filled the Burton Taylor’s black studio space. Izzy Kori’s set design was tantalisingly visually layered, with its intriguing props punctuating the room: an open pack of bread; a tapestry of patterned sheets and ribbon which hung upstage; half-packed boxes strewn about the space; a bed with its sheets in disarray, and a scrabble board on the floor with its tiles spelling out “Jack, COVID, Fetid, Female”. I felt as though I was stepping directly into a private, emotionally charged space which immediately promised action. I also particularly enjoyed Faye Song’s animation, which managed to communicate the sub-textual significance of an emotionally-charged discussion about pasta through the unexpected medium. It is also worth noting Jules Males’ curated soundtrack of Latin choral music, which was entertainingly reminiscent of BBC’s Fleabag in its sudden interjections that displayed change of time and date in the play.

Special commendation must be given to Horton-Samuel and Calcraft for their believable and empathetic portrayals of the characters’ intimate relationship. I especially enjoyed seeing Horton-Samuel take centre stage with a moving phone-call monologue, managing to hold audience attention throughout the entire piece. Kudos also goes to Cottam and director Lydia Free, whose combined skillsets created organic moments of overlapping dialogue and softer notes of vulnerability which added to the emotional pacing of the play. Although written in prose, Wishbone had a distinctively poetic feel in its visual and dialogic layering. My only critique would be that the play ended rather abruptly, with the actors breaking character immediately after delivering their final lines. This left me slightly shell-shocked in my return to reality, perhaps not allowing time to fully absorb the play’s conclusion.

In its totality, Wishbone was a successfully organic production rooted in fantastical setting and sound. Coco Cottam has established herself as one to watch with her unapologetically raw depiction of love and what we do when forced to face it in its entirety. The play was an exemplary presentation of Oxford students’ creative talent, and displayed how considered combinations of art forms can create something magical.

Image Description: Two people acting in Wishbone, with a table in front of them and a curtain behind.