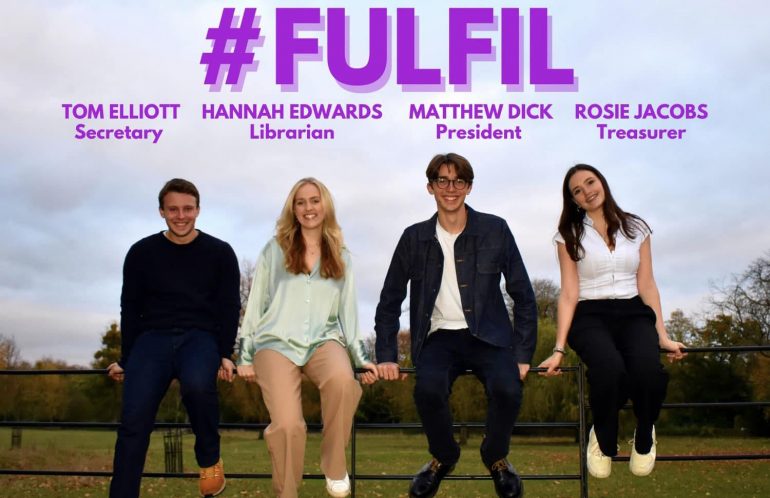 Matthew Dick has been elected to serve as the Oxford Union President in Trinity Term 2023 in a hotly-contested election against his opponent Daniel Dipper. Dick, the current Secretary and a second-year History student at Magdalen College, received 481 votes, defeating Daniel Dipper, who received 425 votes. 44 people voted to re-open nominations as their first preference.

The ‘FULFIL’ slate won down the ballot as well. Hannah Edwards (‘FULFIL’) secured the office of Librarian-elect with 469 votes, beating Rosalie Chapman (‘IMAGINE’) with 390 votes. Rosie Jacobs (‘FULFIL’) secured the Treasurer-Elect position with 459 votes over Lukas Seifert’s (‘IMAGINE’) 391. Tom Elliott (“FULFIL’) was elected as Secretary with 461 votes, winning Ciaron Tobin (‘IMAGINE’) with 370. The new Secretary will serve under the Hilary Term President. The others will serve under the President elected for Trinity Term.

In other races, Conrad Frøyland Moe (‘IMAGINE’), Lewis Fisher (‘FULFIL’) and Sebastian Watkins (‘FULFIL’) have been elected to the Standing Committee with 161, 127 and 116 votes respectively. Amy Gilbride (‘FULFIL’), Anmol Kejriwal (‘LIGHT’) and Nadia-Angela Bekhti (‘IMAGINE’) have also been elected.

Eleven other candidates have also been elected to the Secretary’s Committee, with Julia Maranhao-Wong (‘FULFIL’), Leo Buckley (INDEPENDENT) and Ebrahim Osman Mowafy (‘IMAGINE’) leading the votes there.

Here is the full breakdown:

Turnout for this election was 1023, with slow turnout at the start of election day that picked up significantly towards the end of the day.

Reacting to his loss in the Presidential race, Daniel Dipper wrote, “This campaign never compromised my integrity, and I am truly proud of every single person I ran with and what we stood for”, adding “Of course I wanted to win” and “to put forward what I saw as a radical agenda to try to change the Union for the better.”

He also addressed an alleged incident where “‘Keep the working class in their place’ [was] written on the back of a ballot paper [which were] met to jeering laughter by those present in the count room”, stating “I am unapologetically working class and proud, and that shouldn’t be a controversial statement though it can feel it sometimes.”

Speaking about her win to the Oxford Student, Librarian-elect Hannah Edwards said “From going to debating competitions at school to becoming Librarian-elect of the Oxford union is a dream come true. I’m so thankful for everyone who came out to vote and really excited to start getting to work to fulfil our pledges.”

Secretary Tom Elliott added that “It’s been wonderful to run with FULFIL and I would like to thank Matthew, Hannah and Rosie, along with the rest of the team for their support. They will all do an excellent job. I look forward to serving as Secretary in HT23 and hope that I can deliver on my pledges.”

The Oxford Student has also reached out to President-Elect Matthew Dick for comments.

You can read the Oxford Student’s interview with the President-Elect here.