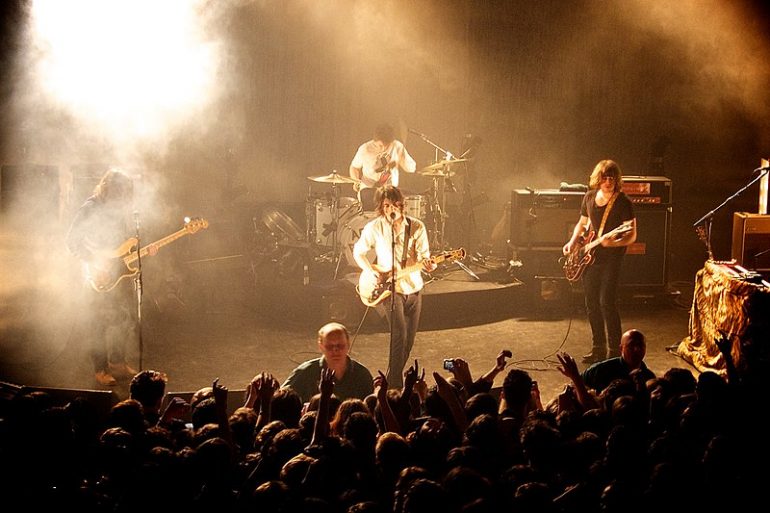 ‘The Car’: A Shining Star in The Face of Musical Mediocrity

Jacob Hill reminisces on the Arctic Monkeys and comments on their new album, ‘The Car’

In the age of TikTok dances and flashy music videos, Alex Turner offers a form of modern-day escapism in his band’s newest LP, The Car. Far from catchy 30 second choruses, Turner invites us to spend 37 minutes in the mind of a man sick of it all. The Car whimsically navigates issues of love, stardom, and modernity with such purpose that it leaves me feeling a slight sense of loss for what music has become. A distance from 2019’s Tranquillity Base Hotel and Casino and even further from 2006’s Whatever People Say I am, That’s What I’m Not, The Car starts on a goodbye and ends with a welcome. The Car stands out by trying something different: something not everyone will appreciate, but something I love nonetheless.

The Car stands out by trying something different

I, as with many, was enthralled by the hard-hitting but emotive melodies of The Arctic Monkeys’ earlier material. From stadium tracks that shot them to stardom such as I Bet You Look Good on The Dancefloor, as well as lesser-known B-side tunes such as Temptation Greets you Like Your Naughty Friend (Ft. Dizzee Rascal), I think the Monkeys’ discography is one of the best ever assembled. Rivalled only by the likes of The Beatles and Bowie, Turner has the right to be called Britain’s great 21st century frontman. I fear he may be the last Britain has to offer.

What distances Bowie, The Beatles, and The Arctic Monkeys from the likes of Oasis, Blur and The Smiths is variation and longevity. Once removed from the social buzz surrounding Oasis or hippies’ God-like status of Morrisey, their music begins to sound the same and blur into one. In the eighteen years Oasis were active, they released eight no.1 UK albums, yet none sound distinct from each other. One after another, high pitched guitar screeches accompanied undisciplined drumming held together by the combination of Liam’s vocal presence and Noel’s technical brilliance. Go back and hit shuffle on all Oasis songs, and I imagine you won’t last the hour before switching back to whatever’s on trend on Spotify.

Rivalled only by the likes of The Beatles and Bowie, Turner has the right to be called Britain’s great 21st century frontman. I fear he may be the last Britain has to offer.

The Car breaks the mould of stagnant listenability and takes us back to a time of LPs rather than DnB remixes. The brilliance of Bowie and The Beatles was diversity – each album was distinct and told its own story. Turner actually took much of the inspiration for his change in style from Bowie; The Arctic Monkeys, of course, were founded as a group of mates that loved Bowie. Even Turner’s other musical projects, like The Last Shadow Puppets formed with Miles Kane, never strayed too far from his Bowiean roots. This shines through in The Car where Turner’s high-pitched tones become the norm and the triumphant orchestra is always itching to go. The genius here stems from variation; The Car tells its own unique story with its own unique sound compared to any other Monkeys album. Turner teases us for criticising his approach in Jet Skis on the Moat as he questions – “are you just happy to sit there and watch while the paint job dries?”.

Having lost myself in the musical brilliance of the Turner’s discography, I must return to the story of their latest instalment, The Car. Written partly in LA before his return to the UK to work with producer James Ford, the album takes a different tone to Turner’s previous work. Returning to the ideas of love last seen in AM, as well as stardom and Turner’s qualms of modernity first seen in Tranquillity Base Hotel and Casino, The Car is the most sombre album to come from the Sheffield-born group. Turner talks of a man embarrassed, still chasing love while time gets the better of him – The Car is the story of Turner “somehow giving it the old romantic fool”. Scars from his previous love affairs are like “body paint”, but trying again, to be someone he once was, is like “performing in Spanish on Italian TV”.

Two clear stories are being simultaneously told here, both ones of change and ageing. Turner is a man changed by love who can no longer fit the persona he once exuberated, triggering ramifications beyond his love life and into his music. The Car acts as a commentary of the changes both in Turner’s own music as well as in the music industry – it seems as if they are increasingly at odds with each other. Once likening himself to Richard of York and the executive branch of the US Government, Turner talks of the immense rise of his music, the music industry and himself as an individual chasing love. It appears as if we are witnessing the downfall of all three. However, in creating The Car, Turner is rejecting the very notions he purports. Turner is at odds with opinions of him – both musically and individually. The Car is a deeply personal piece of work on how everyone else has got it wrong, and I stand by him.

The Car acts as a commentary of the changes both in Turner’s own music as well as in the music industry – it seems as if they are increasingly at odds with each other.

The LP is a mix of upbeat guitar led pieces such as Body Paint, in tandem with more sombre reflections like There’d better be a Mirrorball. Neither the backing of the band, nor the orchestra, ever feels out of place with the direction of Turner’s voice. The instrumental layers present in pieces like Big Ideas will simply floor you. Heavy guitar is used sparingly but with purpose, making the wait for the kick-down all the more satisfying. Sprinkled among these songs are more experimental pieces such as The Car and I Ain’t Quite Where I Think I Am, none of which feel out of place. Purpose and restraint are a staple of more modern iterations of the band’s music and serve to elevate The Car beyond other bands’ recent musical attempts.

Despite its sombre tones and sobering commentary regarding the state of modern music, it is not that which leaves me with a sense of sadness following the album’s conclusion. It’s that this album feels like a goodbye. Turner closes the album in seeing his ‘invincible streak turn onto the final straight’. I hope it isn’t so. Even if this is the final piece in the story of the Arctic Monkeys, it is a finale that surpasses any other. The Car represents an album unlike no other, one that takes us back to the golden age of music and tells a sombre story in such a truly eloquent way. As the end of Perfect Sense plays out, I find myself caught up with emotion; it feels as if Alex Turner may finally be wishing us farewell.