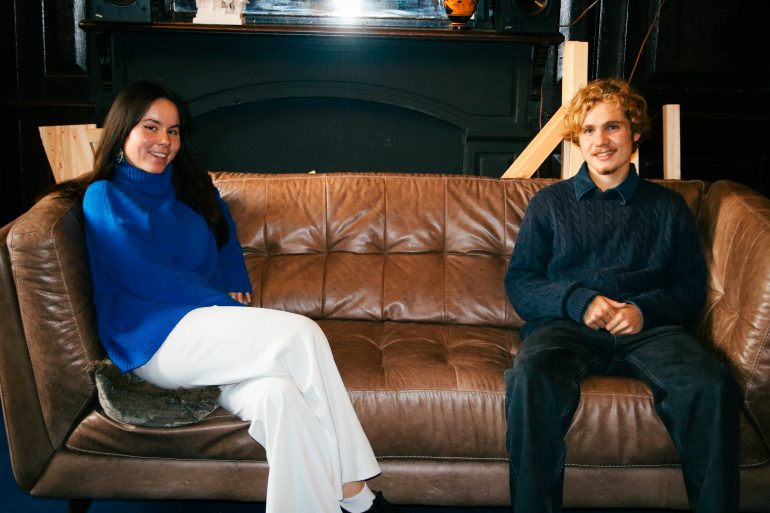 BREAKWATER: ‘How has no one done a feature film here in forty years’

On a rainy Friday afternoon last week, I sat down with Jemima and Max to discuss their upcoming feature film, the first of its kind to be made by students here since 1982, when OUFF released ‘Privileged’, starring a young Hugh Grant making his screen debut.

Away from the pounding rain, we sat, all slightly damp, in the downstairs seating area of Society café.

Lay Mohan: “So, I’ve seen the Indiegogo page and the Instagram, but for those who aren’t familiar, could you summarise what ‘Breakwater’ is about?”

Max Morgan: The film is about this relationship between a young Oxford student called Otto and an older man who lives on the coast called John, and the film tracks that relationship from first encounter to friendship, to romance, to something darker. It’s about excavating the past we carry around as human beings, and how we contain it within ourselves, [as well as] self-denial and not letting yourself get quite what you want.

Jemima Chen: what I think was quite interesting is that Max has taken what starts of as perhaps a typical Oxford – themed story based on a young person struggling with identity at Oxford, kind of ‘Brideshead’-esque, which then gets completely flipped, and made a lot darker and removed from Oxford, which I think is establishing how our film is not your normal student film based in Oxford

L: Guys, I can’t wait to see it. Have you both always wanted to make movies, has that been something on your mind to do for a while?

J: Yeah it’s always been on my mind. Well, Max and I started working together to do drama which definitely had our whole attention last year – the film wasn’t on our minds at all. Obviously we had ‘Mojo’ which was our first project – like our child, and then we had the confidence after ‘Mojo’, [so] we kind of started thinking about the long-term. As secretary of OUFF, I just realised the opportunities for film are huge. The thing with drama is that you’re quite limited to Oxford physically, but with film your reach is just unyielding and endless. Especially because we’ve had some incredible film-making alumni who went to the university, it would be such a shame to not tap into that. But also we were just like, ‘how has no one done a feature film in like forty years’, so that was kind of why we were thinking about film.

M: I always thought that I was kind of the theatre purist, but doing a film and watching lots more films and speaking to people making films, it’s like Jemima said – the reach is just so much further. Theatre is something that – you walk into a physical space and it’s the theatre, whereas with a film it’s more of a project, something entirely new, I think.

J: We’ve mentioned this already before but Max and I have both worked in the industry a bit at a very low-ranking level and I think it’s really nice doing that kind of work to see how things work on a really large scale – that gives you the confidence to be like “Ok, I can do that on a much smaller scale” and also just the ambition to be like “I can do this, I don’t want to start from the bottom I can do my own thing and be in charge of my own project” and that’s so nice, and something the both of us really appreciate.

L: But in terms of process so far, how has it been – have there been any surprises, anything you didn’t anticipate?

M: Well, it’s been going pretty smoothly since and we’re back on track, but there was a situation where our primary location burnt down.

M: Yeah it’s this kind of antiquated seaside home. The whole thing is just so ridiculous.

J: No, I mean it was so bad because it was the prime location and accommodation so yeah, it was THE house.

M: It’s quite an old-fashioned house, I mean it was perfect, so we wrote the film around it.

J; I know, it was a good thing it didn’t burn down when we were filming to be fair.

L: Well yeah, definitely could have been worse. There was no one in there?

J: No, no one in there. There are these photos of the floors, completely burnt down.

M: So that was a big setback- we were trying to sleep eight people on that floor as well as using downstairs as the film location.

J: And it’s also like the delicate thing of being like ‘I’m so sorry your house burnt down, but also will it be ok by March’. We were really lucky we found another place and they’re super excited to let us film there.

L: How do you hope to look back on this film?

J: I’m genuinely so sure this will springboard so many things in the future. It changed the lives of the people who did ‘Privileged’, even if they might look back on it and think “Oh we were young and that wasn’t our best film”, and I know ‘Breakwater’ will do the same thing.

M: We have plans to distribute it via streaming platforms potentially.

J: Hopefully it gets picked up – our main hope is at festivals , because the people at Netflix will go watch it at festivals if we get chosen for a festival – if we get picked up – but obviously that’s the hope. And if not, there’s another feature film called ‘Sticky Toffee Pudding’, who were telling us how the film had a weird resurgence in America – people bought it at Target and it went viral on TikTok- that’s the point of making it now, in 2022, it’s just so much more accessible- it can be on YouTube and it can get traction. But yeah with ‘Privileged’, it’s a record of all of these actors’ first moments on screen and who knows, even in 10 years time, even if it’s still not big, I’m sure the people on this crew will go on to do amazing things and when they’re big it’ll be an amazing testament.

L: So it’s clear you’ve got a vision for what this film will do for the people involved, but what are you hoping the viewer will take away from the movie?

M; The film is about the struggle to forgive yourself and let the past dominate you, and I think the need for us all to revel in the present a bit more, to relish connection. We’re trying to portray Oxford in this wonderful light just as it is but also the slightly darker undertones of the Oxford student experience.

J: I don’t want it to be comfortable watching, because I think Max has written a script that requires a lot of attention to detail and anyone who watches it by the end should be affected. One of Andy’s biggest pieces of advice was that in the last fifteen minutes you should have no clue what is going on but you should really want to know what is going to happen.

Max: You’re watching two people who kind of love each other hurt each other in a way that is unsettling and should hopefully prompt people to think about how you relate to another person – how much of yourself you open up to that person and what happens when you close off so much that the floodgates are forced open.

Breakwater has just started casting. We look forward to seeing the film in cinemas in due course and wish Jemima, Max and the whole crew the best of luck on this momentous project.

This interview has been edited for clarity