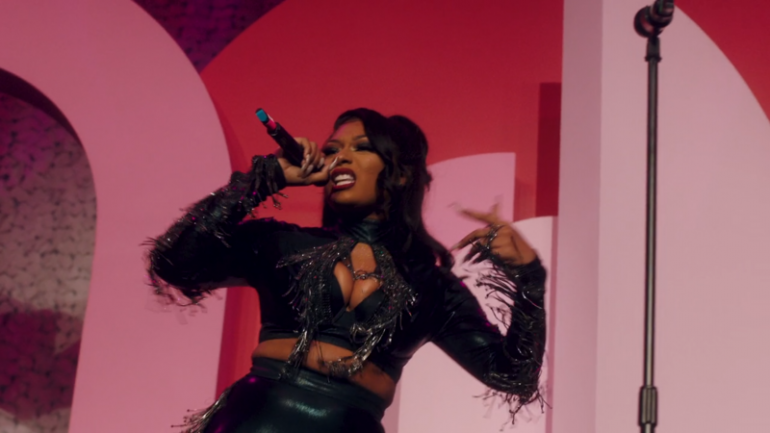 Drake has become the latest in a long line of artists to accuse Megan Thee Stallion of lying that she was shot by Tory Lanez.

On “Circo Loco”, a track from his recently-released collaborative album Her Loss with 21 Savage, Drake raps “this b***h lie ‘bout gettin’ shots but she still a stallion / she don’t even get the joke, but she still smilin’”, which many have interpreted as a dig at Megan. She responded via Twitter, imploring male rappers to “stop using my shooting for clout” and arguing that they “dog pile on a black woman when she say one of y’all homeboys abused her”.

For the uninitiated, it was reported on 12th July 2020 that Canadian singer Tory Lanez had been arrested and charged for carrying a concealed weapon in his vehicle after leaving a house party in the Hollywood Hills. Megan, who was in Tory’s car at the time, was initially reported to have sustained a foot injury from broken glass, but she later revealed that she had actually been shot in the foot and required surgery to remove bullets from her feet. After a back-and-forth between the two artists including accusations of smear campaigns and a full album by Lanez addressing the allegations, he was formally charged with assault with a semiautomatic firearm on 8th October 2020. If convicted of the felony charges he faces a maximum sentence of 22 years and eight months in prison. In an op-ed for The New York Times published days after Tory was charged, Megan wrote of her disappointment that “Black women are still constantly disrespected and disregarded in so many areas of life.”

Ever since the initial allegations were made over two years ago, Megan has faced relentless abuse online from (typically male) rappers and their (typically male) fans accusing her of lying about the shooting. This only worsened after Lanez was charged with assaulting her with a gun. Although numerous well-known rappers such as Chance the Rapper, Bun B and “WAP” collaborator Cardi B spoke out in support of Megan after the shooting incident, more and more artists have seemed to take Tory’s side since the event. In 2021, Megan hit out at DaBaby, who featured on her debut album, for collaborating with Lanez and bringing him out at his Rolling Loud Miami performance. Jack Harlow was also criticised for including Tory and DaBaby on a remix of his hit song “Whats Poppin”. Harlow responded that “it doesn’t feel right as a grown man to speak for other grown men all the time,” stating that “one thing’s for sure, is that Megan got shot, and I wish her nothing but love and respect.”

Where does Drake fit into this picture? The Canadian rap star hasn’t always been on the best terms with Lanez, having reportedly rejected numerous invitations to collaborate with him over the years, but they seem to have resolved their issues if Drake’s lyrics are anything to go by. While he has not publicly responded to the social media firestorm his words created, Megan’s attorney Alex Spiro commented that “despite the irrefutable evidence that Megan was a victim of gun violence, the ignorant continue to support her attacker.” Tory, who is currently under house arrest awaiting his trial in Los Angeles this month, tweeted a shrugging emoji in reply to the renewed attention the situation is receiving. One peculiar element of this story is that Megan herself has a writing credit on the opening track of Her Loss, “Rich Flex”, because it interpolates her breakout hit “Savage”. Was this some kind of crude joke? It’s notable that interpolations (which differ from samples in that they are re-recorded portions of existing songs instead of direct reusings of them) are commonly used when an artist or record label declines to licence the original song for sampling. It wouldn’t be surprising if Megan did not allow Drake to use her song if she was aware of his feelings before the release of the album.

The shooting story has been progressing gradually since it came to light in July 2020 but Drake’s status as one of the most popular musicians in the world caught the attention of many more people. It’s important to remember that Drake’s fan base far outclasses Tory’s or even Megan’s in terms of numbers and his involvement has become a thorn in the side of those who support Megan. Podcast host DJ Akademiks tweeted that “Meg gotta keep her beef wit Tory n Tory alone… we not cancelling Drake no matter wat. Ur the stallion… he’s the GOAT.” Meanwhile, others questioned the role of misogyny in Drake’s statement. Media studies professor Marc Lamont Hill wrote that “if Drake released a song with “clever” wordplay that mocked the shooting of a male rapper, or any man for that matter, the same people defending him would be outraged.” Both tweets have a similar amount of likes, making it unclear whether there’s a consensus online about whether Drake was in the wrong. While Lil Yachty, who has production credits on Her Loss, stated that the line was not about Megan, many would argue the implications of the lyric are quite clear.

It is rather shocking that two years on from the initial situation and Tory Lanez being charged months later, artists still see fit to come out of the woodworks in defence of him. Megan Thee Stallion has experienced remarkable success over the past few years but the shadow of the shooting still looms after all this time. She cannot seem to catch a break because for all her chart-topping singles and awards, she has to deal with these accusations every few months which fly in the face of the general consensus that victims should be believed until proven otherwise and are rooted in the misogyny of the rap scene. It’s true that people would probably be up in arms if Drake made a joke about a prominent male rapper getting shot in a song.

Because of people like him wading into a situation which can only be dealt with professionally in the courts, the stain of the shooting will mark Megan for the rest of her career no matter how the trial goes. She will be immortalised as one of the many people Drake has taken aim at in his lyrics over the years, her trauma a weapon to be inserted into a ‘killer’ bar on an album many will flock to listen to. We will have to wait to see how these men react to the result of the trial which, based on witness testimony corroborating Megan’s version of events, will probably not go well for Tory.