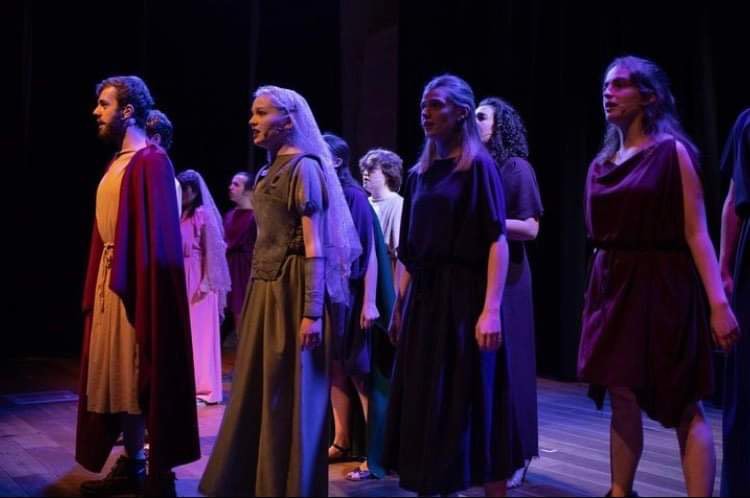 “I’m just putting on a show, might as well make it a good one”: Review of ‘Troy Story: Age of the Hero’

Although student musicals are notoriously difficult to execute well, Troy Story: Age of the
Hero had flare. As a musical based on Homer’s Iliad, an Ancient Greek epic, the show
celebrated its bookishness, poking fun at its seemingly niche origins. The fact that it never took
itself too seriously meant that it had the audience on its side throughout. The titular quote,
spoken by Aphrodite (Riya Kataria), whimsically alludes to the Troy Story team’s confidence in
the show they have created. I watched the show on its opening night amongst a near-full
audience. Cast members could be seen peering through the curtains before the lights dimmed and
a single orange-tinted candle enkindled. The show began with the first lines of the Iliad.

One of the great strengths of Sav Sood and Tallulah Knowles’ writing was its
accessibility, stripping the Iliad of pomp and injecting it with a welcomed dash of crudeness and
humour. Some of the most powerful lines of the show were those lifted directly from the poem in
the faithful fashion of Oxford Classicists, but the writers undeniably put their own spin on the
tale. As the show’s title indicates, the script placed the heroes, and war, at centre stage; whilst the
domesticity and romance of the Iliad were preserved to a certain extent, there was no room for
the grey areas of self-reflection. But musicals are a space for the extremes of emotion, and the
material was clearly judiciously chosen with this in mind.

But musicals are a space for the extremes of emotion, and the material was clearly judiciously chosen with this in mind.

For those already familiar with the story of the Iliad, the task was upon the music, which
fell under the fusion-genre of pop rock, to provide a fresh insight into the well-loved poem. The
band was placed at upstage left, confined within two white papier-mâché Ionic columns. The
elevation provided suggested that the band was a godly presence in itself, a count which I feel
could have been further emphasised. Their rendition of Lena Hayter’s Hamilton-esque
compositions was poised and without fault to the untrained ear. If anything, I feel the production
could have done with further incorporating the musical interludes into the narrative as they often
ended abruptly after their commencement. Overall, the songs were conversational and sat
naturalistically amidst the scenes in which they appeared. At times, the actors seemed to treat
them as lines strung together with music, which provided a sense of realism but also suggested a
lack of confidence in the songs themselves. However, Troy Story quickly found its sound and
delivered multiple professional-sounding gems such as “Run Away With Me” and “Do the Right
Thing”.

The characters of Troy Story were written to be less subtle than their Iliadic counterparts
and those who played into the comic element of the show were the most successful. Standout
comic actors included Dan Savage’s farcical Agamemnon and Riya Kataria’s Aphrodite; Kataria
used her captivating stage presence to toe the line between comedy and elegance, channeling the
demeanor of a beauty guru. In fact, it was a delight to watch the trio of goddesses bounce off one
another’s witticisms and harmonies, particularly in “Judgement of Paris”. Alex Rawnsleu as
Patroclus added an air of charm and jocularity to the sometimes awkward stage relationship
between himself and Achilles (Jak Spencer). The pair’s rapport became noticeably more
comfortable as the show went on and the final arming scene was palpably intimate. Rawnsleu’s
impressions of other ancient heroes showed his impressive comedic range. Paige Crawley
appeared scholarly and naturalistic as the aged Priam, conveying the ‘last king of the city’s’
fragility skillfully. It is impressive that director Harriet Gill managed to pull together such a
consistently strong cast. The bookending ensemble pieces sought to demonstrate this
consistency; Sam Harper as Diomedes being outstanding during these perspective-layering
songs.

It is impressive that director Harriet Gill managed to pull together such a consistently strong cast.

A highlight of the production was its costuming, crafted by Catherine Allport and her
team. Adulation is required of the way in which the costume team introduced visible personality
into the various characters, often making it possible to ascertain an actor’s role before they had
uttered a line. A personal favourite was Thetis’ costume, fashioned from a mossy,
floor-of-the-ocean coloured fabric melded with a sparkling veil which created the impression of
sea-surf. Thetis (Eliza Niblett) and her bewitching voice on “If You Go” appeared to be ever
between water and surface. Another particular costume detail I admired was Athena’s (Grace
Olusola) striking eye makeup, which suited the goddess often described in ancient literature as
having gleaming eyes. Olusola was excellent and acted as a grounding force in the play.

As I left the theatre, I was surrounded by audience chatter about cyclical moments in the
musical score and celebrations of the queer love stories. I gathered that the audience had learned
and laughed—a lot.

Image Description: The cast of Troy Story in the middle of a musical number.