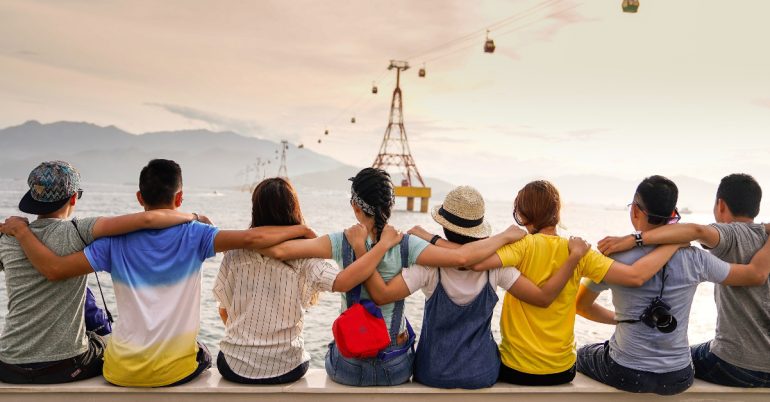 Featured Image Description: Friends with arms interlinked, sitting on a wall and looking out onto a scenic view.

Happy and healthy living – the underlying goal of all medical practises and its practitioners. GPs and healthcare professionals study throughout their entire lives to keep up with new ways to give better prospects for their patients. However, following the maelstrom of the pandemic, the epidemic of loneliness has become further exaggerated, leaving doctors overworked and a substantial psychological backlog; what can doctors do to fix this?

A new type of treatment has been gaining momentum over the last few years: the idea of social prescribing. Following a consultation, a patient might not walk away with only the conventional treatments (drugs, lifestyle changes, general advice), but with an activity to partake in. Local-community activities such as cycling, charity work, cooking and knitting, all aiming to rekindle a passion for life within patients, which then spills over into their physical and mental well-being.

Foundations of the approach

What makes a happy life? One of the longest human health investigations currently ongoing is being led by Harvard researchers to answer this question. Every two years, their 268 strong pool of participants – all of them Harvard second years during 1938 — are asked about their outlook on life. Recruitment of their children was to follow as the men aged, passing each living milestone and providing reflective opinions about how they feel, along with their physical well-being. Those with stronger relationships and social support at 50, experience less mental deterioration at 80, eroding the previous view that genetics were the dominant factor in late human health.

One particular patient having retired from his job found himself in a difficult position. He had developed obesity, type 2 diabetes and went through a tricky divorce, leaving him with an unhealthy reliance on alcohol, relative social isolation, and feeling ‘fed up with life’.

His opinion of his doctors also was not helpful; he would frequently walk away from consultations feeling worse than he did before and had grown used to being ‘told-off’ for his lifestyle choices. However, after moving to a different city, he met another GP. Instead of looking for opportunities for medical intervention, the GP took a much more holistic approach, discussing his patient’s life, his ambitions and outlook. Following a few more appointments, the GP concluded that he was bored and in need of something to get out and do. So, he prescribed his patient a local cycling class, to which after his initial reservations and nervousness concerning the ability of the other cyclists, he began regular attendance.

Soon after, a palpable difference could be seen. The patient had developed new friends, and a much more spirited and optimistic outlook on his life. In addition, substantial health improvements were made, as he lost 20kg in weight and managed an almost insurmountable achievement by coming off his insulin. The patient thoroughly enjoyed cycling and maintained a close relationship with his GP, later becoming a leader within the cycling association and helping others undergo the same transformation.

The patient had developed new friends, and a much more spirited and optimistic outlook on his life.

Following the apparent success of many instances of social prescribing, the UK government and the NHS began a steady investment scheme into the programme. The position of ‘link worker’ was created, an individual that patients can be referred to for social prescriptions, and throughout 2020 onwards, funding was supplied to the National Institute for Social Prescribing to help combat the psychological fallout of the pandemic. For individuals without internet access, mobile phones were issued, and online community events were run during isolation periods during the pandemic.

Similar approaches have begun appearing in other countries, with pilot-schemes providing remarkable improvements in reducing loneliness and instilling a cheerful outlook towards life. Along with the social outcomes, physical illnesses could also be reduced, with patients making fewer visits to GPs although the workload on GPs remained the same. However, at the individual level, social prescribing shows real promise, and seeing doctors really talk to their patients, gaining an understanding of who they are, and where their issues lie is undeniably a move in the right direction.

Gathering data about the effectiveness of social prescribing is difficult; this is why it is tricky to convince investors that this is a cost-effective solution. The heterogenous nature of social prescriptions themselves make it hard to compare data, and asses its quality. It can be difficult to determine what constitutes a success, and variations in the availability of local activities may lead to further health inequalities. These factors combined with the difficulty in forming a ‘control-group’ make studying the impact of social prescribing a significant challenge.

In summary, if the potential of social prescribing is to be fully realised, a well structured and well monitored research study would need to be conducted. Tracking an individual’s progress, changes, and opinions while also conducting a simultaneous control.

With an extensive NHS backlog looming, and waiting lists for treatments and appointments accumulating, doctors struggle to maintain a good social relationship with their patients (GP appointments last around 15-20 minutes on average). We can now see that by interacting with patients without the predisposition to prescribe an intervention, patient outcomes can improve, and health and happiness of individuals will improve.

This is an approach to medicine that approaches patients as social individuals, after-all humans are social beings – our interactions with other people are a huge factor when it comes to our health. Hopefully, future research into social prescribing will yield positive results, and the lives of people and local communities can be improved, helping our societies climb out of their cells created by the pandemic, and into a much happier and heathier world. Through it all, it is the quality of life that matters.