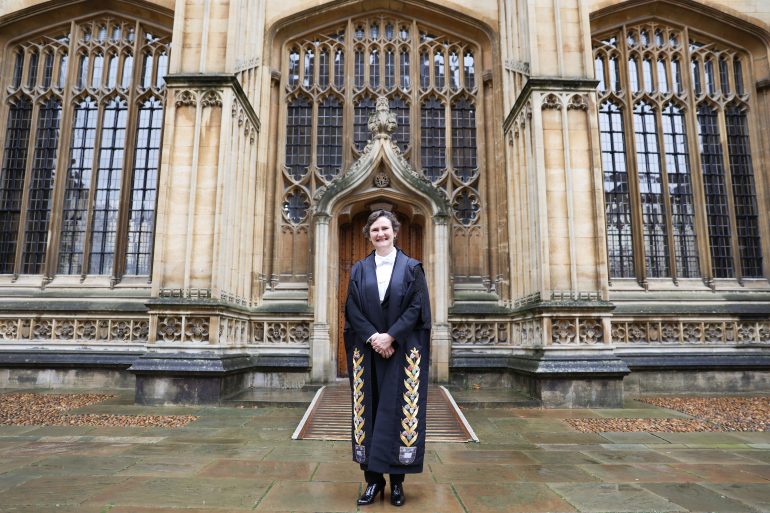 Tracey is the first state-comprehensively educated Vice-Chancellor of the University.

Oxford’s new Vice-Chancellor, Irene Tracey, was inaugurated today in an elaborate ceremony held in the Sheldonian Theatre. In her admission speech, she set out her vision for the University, touching on topics like access, staff pay, free speech, climate, tuition fees and more.

VC Tracey began her speech by thanking her friends, family and Chancellor, Lord Patten. She also paid tribute to Prof Dame Louise Richardson for her work during her time in tenure.

“Prof Richardson, left me and us all a fantastic foundation on which to build our collective ambitions.”

Using her background in neuroscience, Tracey used an analogy to describe the University working more closely with the city, the nation and the globe over the next seven years: “if you fire together, you wire together.”

As an Oxonian through and through, Tracey says she will be “relentless in championing what we do and making sure that the Oxford that I know, live, and breathe, is the one that people get to hear about”.

A hallmark of her tenure is to “advocate for the importance of teaching within universities”. Even as head of Merton College, Tracey had continued her teaching efforts.

“I aim to continue to provide the pain lectures to the UG medical students, as part of my goal to bring the Vice-Chancellorship closer to the day-to-day operation of this University.”

She firstly dove into the state versus private school divide, saying that we should not be “binary” about the issue.

“It’s absolutely not about having a particular target or quotas. It’s a bigger mission than that, which is to have a broad and open desire for students from any background who wish to come here because they think this is going to be what’s going to best suit them.”

She added: “So it’s not restricting it to certain groups or certain sectors and certainly within that will be of course, a continuation in engaging with the state school sector…and the private school sector, which we absolutely recognize that we’ve got kids there who are on bursaries, increasingly, that you’ve got kids from disadvantaged backgrounds.

Her comments mark a change in tone from senior university figures in recent years, such as former VC Louise Richardson, who have celebrated rising numbers of state school pupils and said they are “determined” to increase the number of students from backgrounds that are “not as well-represented at Oxford as they should be”.

Tracey herself is the first state-comprehensively educated Vice Chancellor of the University.

On the topic of staff pay, she promised to commission an independent analysis of pay and conditions for staff at Oxford as one of her first actions in the post. This will look more broadly than the current national pay and pensions dispute, and will also consider how to ensure that staff have a good work-life balance.

“We must find ways to shift the needle in your quality of life so that you can continue to deliver your best performance,” she said, adding that she would do all she could to “support staff during these difficult financial times and [for the university] to be an attractive place to work in the future”.

During the her inauguration, a group of individuals were standing on the Clarendon steps protesting the Vice-Chancellor.

One held a board which read, “New Vice-Chancellor, Same Struggle. Students in Solidarity with UCU.”

Another had a poster which said, “I get emails from my lecturers at 12AM.” 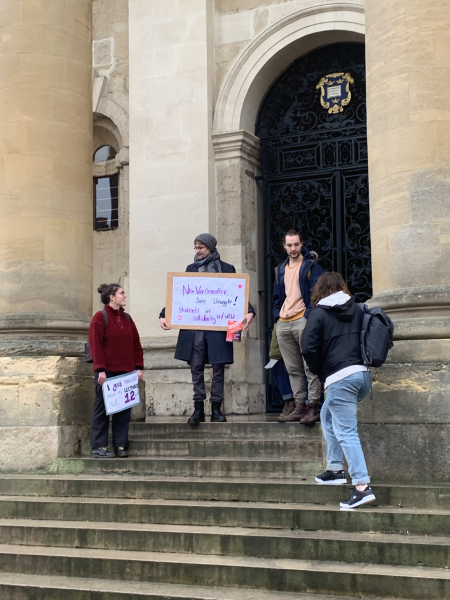 She said, “I’m all about people coming here and being challenged and learning different things, not just in their subject area but how to understand the problem in the round.

She also vowed to seek talks with ministers about the devaluing of tuition fees and a funding shortfall.

“There’s no doubt the whole sector is struggling in every regard. It’s not just about the fees. It’s about just the cost of living and the energy crisis,” Tracey said.

“The cost of running courses in the university is significant. The amount of time and effort and finances that’s poured into it is great but it’s all at great cost. So there’s no doubt sustaining that model will require thinking boldly about how we are supporting that activity financially.

On climate, she announced her intention for Oxford University to be a centre of interdisciplinary research on finding climate solutions.

But, she also stressed the need to include the scientific expertise and financial backing of oil companies.

“The upshot is that it’s going to be very difficult to wean off oil in the short term, we can’t just do that tomorrow, we don’t have enough alternative energies to do that.

“So to a certain extent there has to be still that recognition and engagement of that industry, and they’ve also got a great science and engineering base to come up with some of the solutions, they’ve also got the finances to do it.”

In conclusion, Tracey echoed the words of her sporting idol Billie Jean King, “pressure is a privilege”.

“Let us be generous with our incredible resources and the opportunity we provide for transformative life experiences; and let us become the very best we can be.”

Cover Image Description: Irene Tracey stands in her robes in front of a University building