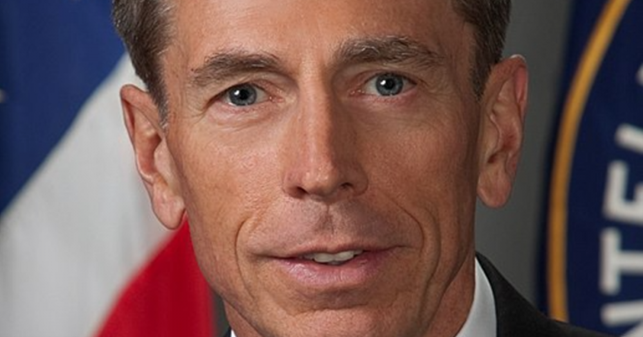 General Petraeus is a captivating character. He lives a relentless life, where his ferocious industry, dutiful public service and valour meet as well-known acquaintances.

General David H. Petraeus (US Army, Ret.) is a Partner in the global investment firm KKR and Chairman of the KKR Global Institute, which he established in mid-2013. Prior to joining KKR, General Petraeus served over 37 years in the US military, culminating his career with six consecutive commands as a general officer, five of which were in combat, including command of the Surge in Iraq, command of US Central Command, and command of Coalition Forces in Afghanistan.  Following retirement from the military, and after confirmation by the Senate in a vote of 94-0, he served as the Director of the CIA during a period of significant achievements in the war on terror. General Petraeus graduated with distinction from the US Military Academy and later earned a Ph.D. from Princeton University.  He has held academic appointments with the US Military Academy, the University of Southern California, Harvard, Georgetown, the City University of New York Honours College and he is currently a Senior Fellow and Lecturer at Yale and an Honorary Professor at the University of Birmingham (UK). General Petraeus has earned numerous awards and decorations, including four Defence Distinguished Service Medals, the Secretary of State’s Distinguished Service Award, the Bronze Star Medal for Valour, two NATO Meritorious Service Medals, the Combat Action Badge, Master Parachutist Wings and the Ranger Tab. He has also been decorated by 14 foreign countries and sanctioned by Russia. He is believed to be the only person who, while in uniform, threw out the first pitch of a baseball World Series Game and did the coin toss at a Super Bowl.

DH: What do you believe is the primary reason for the Russian military’s failure to achieve their strategic objectives?

DP: There are numerous reasons for Russia’s failures – poor campaign design, shocking inadequacies in the conduct of basic tactical tasks, lack of a professional noncommissioned officer corps, overestimation of Russian capabilities, inability to achieve combined arms effects (i.e. integrating armour, infantry, engineers, indirect fires, close air support, air defence), very poor command, control, and communications, etc. But the primary reason has to be the extraordinary performance of the Ukrainian forces which are, of course, fighting their war of independence, doing so brilliantly, and continuing to increase in size and capability as a result of the total mobilisation in Ukraine and the enormous provision of arms, ammunition and other material by the US, NATO and other western countries.

DH: Thinking in terms of the concept of ‘strategic leadership’ which I know that you’ve done work on with the Belfer Centre for Science and International Affairs, why has the USA been able to demonstrate strategic leadership during the war?

DH: The USA (nearly $50 billion) and the UK (over $3 billion) are the two largest donors to Ukraine’s war efforts and so do you believe that they should have more influence over the timing and nature of potential negotiations than other western powers?

DP: I think that at this point, the approach by the US and most other western powers properly has been to adhere to the adage, “Nothing about Ukraine without Ukraine.”  But, presently, the conditions established by Ukrainian President Zelensky are clearly well beyond anything that might be acceptable to Russian President Vladimir Putin and Putin does not appear willing to engage in serious negotiations in any case.  My sense is that negotiations will not be viable until President Putin recognises that the war in Ukraine is not sustainable on the battlefield or on the home front (due to sanctions and casualties, that are already many times those that occurred during the USA’s time in Afghanistan).  And we should do all that we can to hasten that recognition.  At that point, certainly the US and UK will likely play particularly prominent roles in possible negotiations, especially given that they have led many of the initiatives to impose financial, economic and personal sanctions and export controls on Russia and Putin’s inner circle – from which Putin will want to see ended as part of any negotiated resolution.

DH: As President Putin describes Xi as ‘my friend’ and invites him for a state visit in 2023, what can the USA do to balance against this emerging alliance?

DP: I think the US and the West have been embarked for some time on efforts to respond comprehensively, pragmatically and effectively to the emergence of a renewed era of great power rivalries, especially given the relationship between the US and China that the US National Security Advisor has described as “severe competition.”

DH: Thinking back to your time in Iraq and Afghanistan, is there anything that the USA and the alliance could now be doing to enhance their support to Ukraine that they currently are not doing?

DP: I’m not sure you need to think back to Iraq and Afghanistan to answer this question frankly. The war in Ukraine presents a very different context, conflict and situation from either of those two conflicts. But to address the question, the biggest issues have to do with additional capabilities that could be provided to Ukraine – e.g. longer range rockets (extending the range from 80 to 150 km) for the U.S.-provided HIMARS (high mobility artillery rocket system), more capable drones, western tanks and additional air defence capabilities, as well as the very substantial resupplying of artillery, rockets and other munitions that have proven so important for Ukraine.