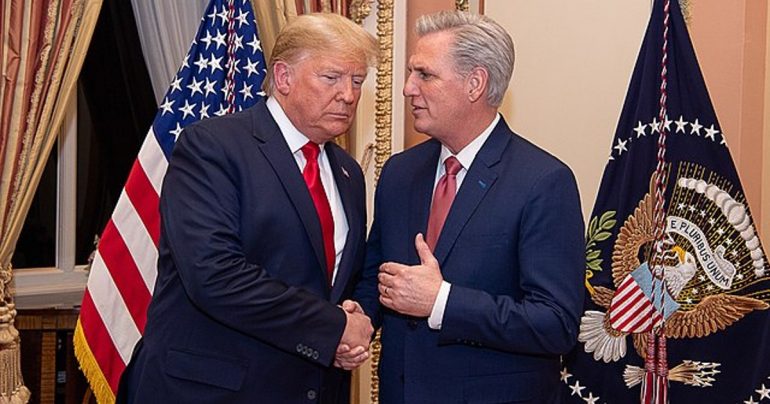 The only winner from Kevin McCarthy’s pyrrhic victory is extremism in American politics. Expect a Republican conference – and a federal government – in perma-crisis until 2024.

Kevin McCarthy – now Speaker of the House of Representatives – was for many a poster boy for the rightwards drift of the Republican Party under Trump. Once a mainstream member of Republican Congressional Leadership, McCarthy – then Majority Leader, heir-apparent to the Speakership – was denied it in 2015 by the so-called Freedom Caucus, a grouping of the party’s most right-wing members. Soon after he began his transition into one of Donald Trump’s most powerful congressional allies. Over the fractious second half of the Trump Presidency, he kept an often-restless Republican caucus united behind the President, militating against Democratic efforts to impeach him. He even supported far-right conspiracy theorists endorsed by Trump, like Marjorie Taylor Greene, in their elections.

The January 6th insurrection seemed a turning point: in a notable floor speech he held Trump partially responsible for the horrific events of that day, which put in mortal peril members of the caucus he led. Privately, McCarthy suggested that the election was not stolen and considered supporting serious action against the President. This was not to last. On the 28th of the same month, he went to Mar-a-Lago to kiss the former President’s ring; he voted against the certification of election results in battleground states that Biden won; and he would later allow pro-Trump House Republicans to remove Liz Cheney from her leadership position.  In a move for which Democrats never forgave him for, he removed his members from the Jan 6th Special Committee, after a negotiation in which he achieved all his stated goals. It was a blatant act of partisanship that destroyed the chance of bipartisan consensus in the aftermath of the insurrection.

he went to Mar-a-Lago to kiss the former President’s ring; he voted against the certification of election results in battleground states that Biden won;

McCarthy is so loathed by many because he symbolises the devil’s bargain made by the Republican Party and its extreme factions. His consistent support for Trump and his allies has always looked like a blatant act of political positioning designed to deliver him power – in the form of the Speaker – at whatever cost.  But this very insincerity is the reason much of that far-right flank was determined to deny him the gavel. At the start of November, McCarthy seemed home and dry. A ‘Red Wave’ was predicted in the House, bringing him a comfortable majority. But Biden’s better than expected performance left him with a caucus of 222 members – only 4 more than the 218 needed to win votes in the House.  Knowing they had the numbers to block his ascent indefinitely, his conservative critics saw the chance to extract whatever concessions they wanted. Hardball tactics – including threatened removal from committees – only hardened their resolve. With twenty or so holdouts, McCarthy suffered the indignity of losing to Hakeem Jeffries – the Democratic nominee for Speaker – in all but the last ballots for Speaker.

What was notable about the rebellion against him was how small it was – and just how little that mattered. Almost all of the prominent figures on the party’s right vocally supported McCarthy: from Trump and Sean Hannity to its congressional leaders, Jim Jordan and Kevin Hern, the chair of the conservative Republican Study Committee. Marjorie Taylor Greene, the poster girl of MAGA, infamous for her advocacy of QAnon, emerged reborn as a McCarthy ally. The rebels’ chosen placeholder candidate, Byron Donalds, was a complete unknown, their most prominent advocates – Matt Gaetz and Lauren Boebert – once dismissed as lightweight Trump cheerleaders.

Knowing they had the numbers to block his ascent indefinitely, his conservative critics saw the chance to extract whatever concessions they wanted.

For a rebellion led by some of his most outspoken supporters, Trump’s lack of influence was notable. One of the enduring images of this crisis will no-doubt be Taylor Greene handing McCarthy a phone with ‘DT’ on the line, only to be waved away. It seemed a symbolic moment where the forces Trump unleashed – including his ‘America First’ politics – escaped his control; where the unity of the MAGA right collapsed under its own extremism.

Many of McCarthy’s concessions to win the gavel have not yet come to light – but they were undoubtedly momentous. Gaetz, when asked why he stopped voting against McCarthy, replied that he simply had nothing left to demand. On a personnel level, they almost certainly include putting hard-line conservatives in charge of key committees and putting a serious cohort of them on the House Rules Committee, which decides which bills get on the House floor and how much consideration they receive. This means even more hard-line legislation and even more bullish obstruction to the Biden Administration.  Nevertheless, the biggest headache they are likely to cause is over federal spending. The incoming majority was already expected to force fights with Biden and the Democratic Senate; McCarthy had committed to capping 2023 expenditure at 2022 levels, meaning real terms cuts, and to repealing the PAYGO rule that allows spending to rise.

It seemed a symbolic moment where the forces Trump unleashed… escaped his control; where the unity of the MAGA right collapsed under its own extremism.

But McCarthy’s opponents have pushed him to even more extreme stances. Angered by the willingness of Senate Republicans to pass a $1.7trn Omnibus spending bill just before Christmas, they have secured individual spending bills per federal department instead, with amendment free-for-alls on each bill. This means making the appropriations process as drawn-out and painful as possible. And they will push for even deeper cuts to domestic spending including Medicare, public education and social security. Conservatives have even spoken about refusing to raise the debt ceiling without Democrats agreeing to spending cuts – which would essentially account to threatening a government default.

All this poses real electoral risks for Republicans, who may well have to own a government shutdown (where federal services grind to a halt) over cutting core federal provisions. Republicans could use moderate Democratic votes to get less hard-line spending plans through – but this would mean forcing Biden and Democratic Senators to approve eye-watering cuts. One especially fraught spending issue will be aid to Ukraine. McCarthy’s willingness to sign off defence spending for Ukraine was a lightning rod of contention with his opponents, many of whom ascribe to an ‘America First’ foreign policy that couples a classic isolationism with vague accusations of corruption between Biden and Zelensky. But on this they are out of step with many of their colleagues in the House and, especially, with the more traditional Republican cohort in the Senate. A messy internal dispute within the party over Ukraine is almost inevitable.

Amidst all these potential standoffs, McCarthy’s position itself is precarious – to the point that American commentators have started comparing him to Liz Truss. The single most important concession he made is on the so-called single member motion to vacate. This means that any one member of the House can force a vote of confidence in the Speaker (a change from the previous threshold, a majority of the governing party, put there by Pelosi). Assuming Democratic opposition, he would have to lose fewer than six Republicans to hold on – a steep ask. It was especially pointed that, in the 15th and final ballot, the last five holdouts voted present – thereby lowering the threshold and allowing him to make it over the line – instead of voting for him.

One especially fraught spending issue will be aid to Ukraine… A messy internal dispute within the party over Ukraine is almost inevitable.

In order to win, McCarthy has put his position in permanent jeopardy; and his concessions on committee gavels and spending to his right flank risk making the already tricky task of divided government near-impossible. Meanwhile, he needs to keep an eye on his other flank – because his narrow majority means that a few Republicans could theoretically unite on occasion with Democrats to advance more moderate aims. While all this internal division is a political gift for the Democrats, concessions to the far right on spending will make the work of the Biden Administration far more difficult. Expect chaos in the Republican conference and federal gridlock for the near future.