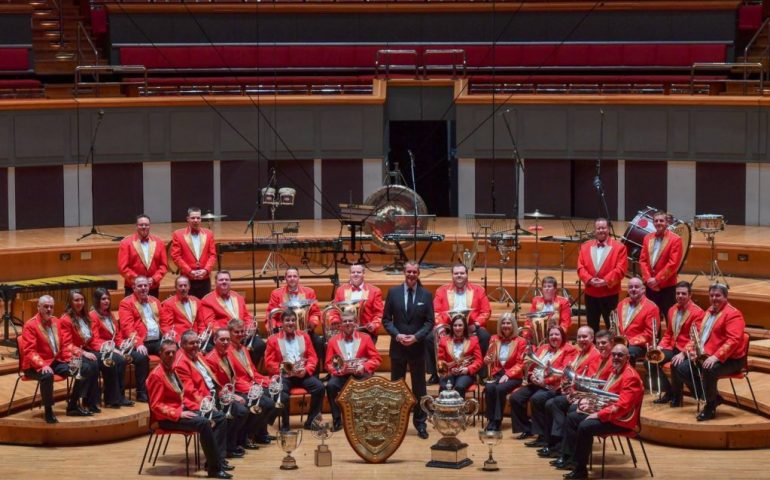 On a windy Sunday afternoon, Cory Band graced a sold-out and palpably buzzing Oxford Town Hall with a thrilling and bombastic two-part show.

In the world of brass music, Cory really has done it all. Musicianship that is deft, urgent, and sensitive has made them the world’s number one ranked band for 16 consecutive years, winning the ensemble 9 National Brass Band Championships, 8 European Brass Band Championships and countless others. In 2016, they became the first brass band ever to win the elusive ‘Grand Slam’, holding National, Open, European and Brass in Concert titles.

The concert began with a performance of director Philip Harper’s composition The Field of the Cloth of Gold. Harper led the group through a luxurious rendition that perfectly conveyed the theme of braggadocious royal summit between monarchs in the sixteenth century. In many ways it functioned as a statement of intent, showcasing the band’s extensive range of musical characterisation that ranged from bold fanfare to velvety mezzo-piano. But Harper didn’t just lead a performance of his band; he also gave one, playing Adele-like interlocutor between each piece, highlighting important pieces of context and playfully jesting with his eager audience.

Following Harper’s own composition, the band played Dean Goffin’s Rhapsodic Variations and Wilfred Heaton’s I Will Follow Thee. Both pieces, written in the 1900s for the Salvation Army, were set to religious texts, matching the spellbinding middle section of Goffin’s variations featuring a ghostly chorale that demonstrated the band’s meticulous dynamic control.  And what to say of the band’s performance of I Will Follow Thee, a world premiere arrangement of a piece previously written for cornet and piano. The piece introduced us to the dazzling musical antics of Tom Hutchinson, who featured as a soloist in many of the pieces performed by Cory.

Perhaps the highlight of the concert was Cory’s performance of Philip Wilby’s Saints Triumphant. A piece commemorating the 150th anniversary of Ralph Vaughan Williams’ birth, the piece paid tribute to many of the composer’s works, including the hymn ‘Sine Nomine’, his 3rd symphony and the adored ‘Fantasia on a Theme by Thomas Tallis’. Cory’s performance featured ingenious use of the space, with parts of the ensemble playing behind the audience. Paired with Cory’s delicate timbres, the result was an ethereal soundscape that inexplicably belied the fact that this was indeed a brass band, feeling in moments like an ensemble of ambient synthesisers.

Following an interval, the band performed a second half that, while clearly intended to be less serious than the first half, wasn’t any less enthralling. Performing works such as A Doctor Who Fantasy, Harper’s arrangement of Walk Like an Egyptian by 80s group The Bangles and the theme from the ‘Thunderbirds’ TV show, Cory energised the audience through an enthralling mixture of familiar tunes with their characteristic aplomb. By the end of the concert, Cory had the audience on their feet, rapturous with applause; their encore was merely a cherry on top.

Cory Band’s fantastic blend of exhilarating musical moments paired with subtle and delicate dynamic contrast was a delight to watch: a must-see the next time they are in Oxford.