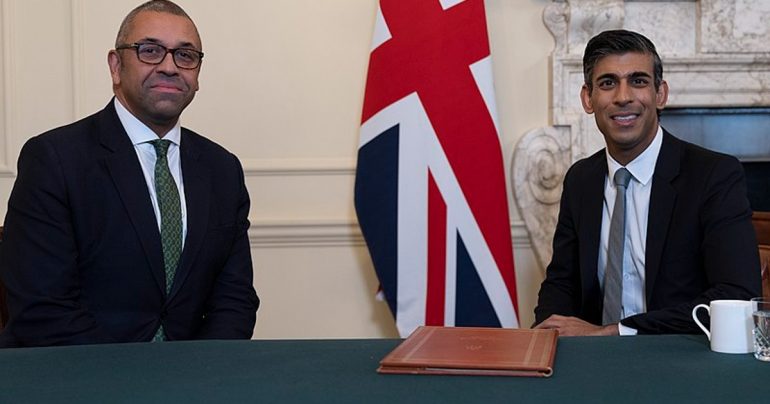 Excuse Me Sir, Where Can I Find Global Britain?

On the 14th of January 2023, a British citizen who had been imprisoned on trumped-up spying charges in Iran since 2019 was executed by the country’s dictatorship. Alireza Akbari was an Iranian reformist politician and one-time deputy defence minister who had retired from politics, moved to and lived in Britain for a decade and naturalised as a British citizen. After returning to Iran in 2019, he was arrested and imprisoned and reportedly endured thousands of hours of torture and interrogation. The British Prime Minister, Rishi Sunak condemned his execution on Twitter as “a cowardly act” by “a barbaric regime”. The Foreign Secretary, James Cleverly, also tweeted that “this [barbaric act] will not stand unchallenged”.

Apart from the sense of shock that this news story may inspire for the reader (or worse, imagine being British Iranian these days) you may also be left wondering ‘is that it?’ or asking ‘Is tweeting condemnation all the British government can do after it has failed to save or protect one of its citizens?’. After all, on the inside cover of British passports there is an inscription which reads “Her Britannic Majesty’s [should be changed to ‘His’] Secretary of State…requires…all those whom it may concern…to afford the bearer such assistance and protection as may be necessary”. Akbari’s execution could be viewed as a sobering wake-up call that no dual national can be completely safe (in Iran at least). Whether they came to Britain as refugees or not (not being able to return in the case of the former) in Iran they can be arrested, and convicted of trumped-up spying charges and there seems to be nothing the British government can do to save them. This is a sobering exposure to the limitations of Britain’s reach and influence, to even protect its own citizens.

However, it may be slightly unfair to measure Britain’s influence around the world, perhaps in the one rogue state which conforms to no international norm or diplomatic protocol. The Iranian dictatorship is in some ways arguably even more isolationist than North Korea, refusing to negotiate directly with the United States for example (at least Kim Jong-un met and shook hands with then President Trump). However, even taking into account the exception of Iran, Britain’s influence on the world stage has taken a serious hit in recent years.

This is a sobering exposure to the limitations of Britain’s reach and influence, to even protect its own citizens.

The humiliation of the Suez Crisis in 1956, was perhaps the first time (since the first wave of decolonisation) the British establishment realised that the country was no longer a first-rate power. After having been reprimanded and economically threatened by US President Eisenhower, Britain and its rulers concluded that they would no longer be able to militarily intervene in another country (as they had done before) without American permission even if in the  1950s it had a much larger ‘warfare state’ than today, in comparative terms. Ever since the loss of the British empire (for good, needless to say) and the painfully tangible realisation of it by the British elites, they have pondered about Britain’s new place in the world.

Becoming Prime Minister just after the Suez debacle, Harold Macmillan sensed a need to think deeply about Britain’s new position in the new post- ‘Pax Britannica’ age. So in June 1959, he commissioned a panel of senior civil servants and military commanders to ‘forecast what the state of the world would be in 1970, and what role the United Kingdom would be able to play in it.’ From this ‘Future Policy Study’, a few important conclusions were drawn that shaped Britain’s foreign policy for the following decades. The report emphasised the importance of the NATO alliance and cooperation with the US to Britain. Yet it warned that the ‘Anglo-American partnership is not a law of nature’. The report’s authors wrote that “One basic rule of British policy is clear: we must not find ourselves in a position of having to make a final choice between the United States and Europe. It would not be in our vital interests to reject either one or the other”.

Ever since the loss of the British empire (for good, needless to say) and the painfully tangible realisation of it by the British elites, they have pondered about Britain’s new place in the world.

Perhaps it was this clear-eyed assessment which prompted Macmillan to launch Britain’s first bid to join the new European Economic Community (EEC) in July 1961. Though the application was vetoed twice by the French president, Charles de Gaulle, who viewed the British as ‘too Atlanticist’ to ever be able to become good Europeans. Nonetheless, Britain finally joined the EEC by the early 70s. In the following decades, Britain tried to play the role of a bridge between the United States and Europe, perhaps most effectively under Tony Blair. Yet more than six decades after the Future Policy Study, Britain is now distanced from its European neighbours after Brexit and neither particularly close to the United States, even under Liz Truss reportedly abandoning the traditional ‘special relationship’ label which has been used to describe the UK-US relationship since the days of Winston Churchill.

In 1962, the former US Secretary of State, Dean Acheson famously remarked that Britain had “lost an empire, and failed to find a role”. In the early 2020s, having left the European Union and finding itself distanced from Washington, Britain can be described as having lost a role and struggling to find another. This awkward positioning stands in clear contrast to the vision painted by the leading Brexiteers who promised a ‘global Britain’ which was supposedly ‘unshackled from Europe and only now able to engage with the rest of the world’.

However, I think there are a number of ways the country has become less internationalist and outward-looking than it was before. For instance, in 2020, the UK government merged the Foreign Office with the Department for International Development (DfID) which had existed since 1997 and had gained a reputation as a world leader in aid and development policy. Since 2005 the government had pledged to spend 0.7% of the UK GDP on international development, which far from being an arbitrary figure was in fact a UN target. That pledge made by Tony Blair was only gradually realised in 2013 under David Cameron (for this both PMs deserve credit). Yet that policy was abandoned in late 2020 and spending was reduced to 0.5% of GDP. This was, in fact, a double cut in the aid budget since as UK’s GDP shrank during and after the pandemic, the aid budget would have shrunk with it either way without a cut in percentage.

In the early 2020s, having left the European Union and finding itself distanced from Washington, Britain can be described as having lost a role and struggling to find another.

Secondly, despite the country’s network of 274 embassies and consulates across 169 countries, British diplomatic and consular missions are often small operations with a handful of professional diplomats and “no real capacity to lobby and persuade at the top level”. The number of career diplomats employed by the Foreign Office has fallen from 8,000 at the end of the cold war to a little more than half of that in 2015. The numbers only began to rise again in 2018 under Jeremy Hunt’s tenure with a target of 1,000 new staff in the next two years. All these have been pointed out by Peter Ricketts, a career diplomat whose recent book ‘Hard Choices’ is a must read for anyone who cares about the subject.

Thirdly, since 2016, Britain has had six foreign secretaries, each on average lasting a little over a year in the job. This level of turnover is not conducive to the country’s (supposedly) ‘chief diplomat’ learning enough about their department, their role or building the necessary (often personal) relationships with their counterparts around the world.

An American friend from Washington DC told me about his experiences of first arriving in Britain as a student which provides a good metaphor: “Dude, your country is falling apart!” he said. “Britain was once a first-class country that got a 2:1…now it feels like it’s becoming a 2:2 country”.This was a good university student analogy I thought, despite how depressingly downbeat he sounded about the place I otherwise love and call home.

But the recent and current trends should not be mistaken for destiny and fatalism. A clear-eyed and realistic assessment of Britain’s strengths and limitations has to be found between the rhetoric of boosterism on the one hand and pessimism and isolationism on the other.  I personally think that Britain really could become a ‘soft power superpower’ if it wanted to, and if it once again seriously invested in what it really can be good at, namely aid, diplomacy and intelligence. The country must accept that it can never seriously compete with the military spending of the likes of the United States and China. Instead, it must focus on areas where it can have the highest marginal returns at a time when money for public services may be in short supply.

In some ways, Britain is singularly qualified for the role of a soft power superpower. It is a country that was one of the architects of the post-war liberal world order and the structures that were supposed to uphold it, from the United Nations to NATO. Yet neither NATO nor the G7 is big or inclusive enough to act as a forum or a steering committee for the world’s democracies. An alternative must be found. Britain can shape itself into a new role as the convener and the de-facto secretariat of a new D-10 group of leading democracies, including important players like India, Australia, and South Korea which the G7 excludes. Britain must also repair its relations with both the United States and Europe and restore its traditional role as a bridge between the two.

…Britain really could become a ‘soft power superpower’ if it wanted to, and if it once again seriously invested in what it really can be good at, namely aid, diplomacy and intelligence.

Whether we accept Joe Biden’s dichotomy of ‘Democracies vs Autocracies’ or David Miliband’s ‘Accountability vs Impunity’ categorisation of the new shift in the global geometry of power, the country that arguably invented the rule of law (‘Magna Carta’ and ‘Habeas Corpus’) can still play an important role and make a valuable contribution if it genuinely engaged with global affairs. Boris Johnson was in fact uncharacteristically objective when he claimed in his farewell speech that UK’s “diplomats, security services and armed services” are still “globally admired”, even if its politicians have become laughing stocks in recent years to outside observers. Amidst the recent political turmoil, Britain’s career diplomats around the world have had to (in John Kampfner’s words) act as “reputational firefighters”.

Yet, even with all the recent developments and trends, hope is not all lost. The experience of Ukraine shows how Britain can still ‘win friends and influence people’ once it invests in others and actually stands up for the values it purports to uphold. Any British reporter who has travelled to Ukraine after the Russian invasion would talk about the warm reception they have received after mentioning they were British. Those smiles and cheers amidst the Ukrainian resistance prove that Global Britain as an ideal and a force for good may for now at least be found in the streets of Kyiv.