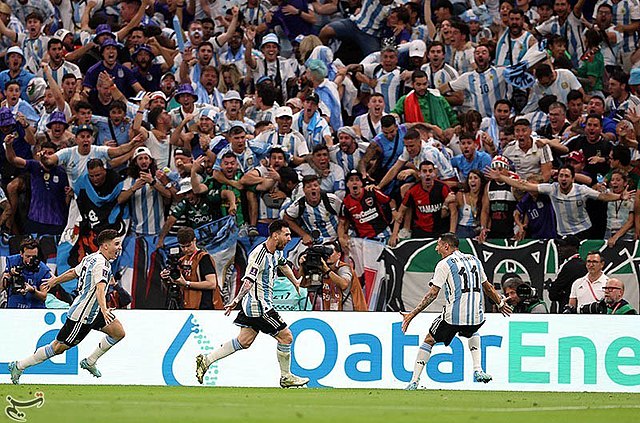 The Reflections of Kovacsstradamus, aka the Qatar 2022 World Cup Review

Just over 2 months ago, based on the highly expert qualifications and authority afforded to me as Sports Editor for the OxStu, I took on the unenviable task of predicting the group stage and beyond of the Qatar 2022 World Cup. In the vain hope that it may establish the reputation of the great foreseer ‘Kovacsstradamus’, I jumped head first into the inevitably sure-to-be-wrong guesses…

Not a bad one to start off with, the only mistake here was overestimating Qatar, saying ‘they will prove a tough enough opponent in the group stage’. The hosts had a miserable tournament, from the first minute to the last they seemed out of place in the world cup field and suffered 3 decisive defeats to clearly superior opponents. From a sportswashing PR perspective the tournament may have been a success, but from a strictly football point of view, the Qataris might very well be asking whether all the money invested was truly worth it. The Dutch brought nothing less or more than what was expected of them, meaning the slight hope of the Oranje going ‘very far in the tournament’ didn’t quite come to be. Senegal can be satisfied with reaching the round of 16, but the 3-0 defeat to England shows that there still remains a clear gap between them and the top tier of national teams.

Another decent prediction effort here, England as expected topped the group with relative ease and followed it with a demolishment of Senegal, only to come up just short in the quarterfinals when captain Kane went a bit too Entente Cordial and let the French through, thinking it’d be impolite and very un-English to score two penalties in a row… Jokes aside, Southgate’s squad will be feeling devastated from that defeat – it seemed there was a real chance at glory this time around. Nevertheless, this is still a very young England squad and probably one that will be among the favourites at major tournaments for the next decade, so there is room for optimism among the ever-pessimist English fans. Gareth Bale’s last hurrah (as we now know) ended in disappointment as he struggled for form, unable to carry on his back an ultimately rather bland and unexciting Welsh effort in Qatar.

It’s only gone and happened, hasn’t it? My confidence of the eventual winner wasn’t high pre-tournament, but the hint of greatness was there: ‘Argentina is not among the favourites this time around, but with a little bit of Leo magic, who knows?’ An incredibly cohesive team, made up of a mix of world cup-debutants and seasoned veterans, led by exactly that little bit of Messi magic (and some incredible Emi Martinez mind-games), bounced back from an opening shock defeat to Saudi Arabia to go all the way, beating out the defending champions in an incredible final of twists and turns to end a 36-year wait for another World Cup victory.

On his last attempt, one of the greatest of all time, Lionel Messi, has finally got his hands on the major trophy that has so far eluded him.

Much better Argentinian squads have failed before, but this time around everything fell into place. A perfect story for the ages.

France – no two ways about it, the prediction got this one very wrong.. Playing off past defending champions struggling at the subsequent World Cup, the bold claim was made that Les Bleus would fail to make it out of the group stage… Instead, the French decided to rudely ignore recent historical precedent and make a real effort at defending their trophy, winning their group with relative ease before skipping past Poland and knocking out England and Morocco en route to the final. There, after 75 minutes of the team doing nothing, it occurred to Mbappe that this was actually a World Cup final, and he quickly clawed it back for his side, only to then lose on penalties. If only Kolo Muani lifted the ball in that 120+3’ chance, France could’ve become the first back-to-back winners since 1962. Added embarrassment for the other group D prediction of Denmark being ‘a very solid shout for the ultimate dark horses’. The fact that the author of these articles resides in Copenhagen outside of term time surely had nothing to do with that one…

Not a great prediction in group E, although it’s fair to say no one could’ve expected Japan to end up topping this group. They did it the hard way as well, thinking that securing a place in the knockouts by beating little Costa Rica was simply too easy, opting instead to lose that game and win against the Spanish – respect. Germany has underwhelmed once again, Lineker may need to rethink his quip about football being a simple game where the Germans always win… Ultimately, no one made it very far from this quartet, with both Japan and Spain losing on penalties in the round of 16, but it does say a lot that while Japanese coach Hajime Moriyasu got his contract extended, Luis Enrique stepped down from his position after a forgettable World Cup for Spain.

What no one will forget however, is that magical minute and a half on matchday 3 when Japan and Costa Rica were set to go through.

And the predictor’s reputation just keeps plummeting… Belgium had such a shambolic outing in Qatar that some players opted to take separate flights home upon being eliminated. Not only did the results not go their way, the performance from a team that included players like De Bruyne, Hazard, or the in-form Trossard, can only be described as a crime against football. What made the Portuguese FA appoint Roberto Martinez as the new head coach after that display is really anyone’s guess. Musing that Qatar 2022 may be ‘one to forget’ for Croatia was rather silly too – as we now know, when it comes to World Cup knockout stages Croatia and penalty shootouts is the heavenly combo. Two medals in two world cups, Modric & Co. have made their nation proud once again, and firmly established themselves as a top side in international football. Morocco however was the biggest misfire of the entire prediction. We can only assume that motivated in large part by reading the OxStu and the complaint that they’ve been ‘lacking memorable performances at big tournaments in the past years’, the North Africans have made history, the first ever team from the continent to reach the semis at a World Cup. It was no fluke either: delivering the greatest defensive performance at the tournament, they conceded only once prior to the semi-final, and knocked out giants like Spain and Portugal on their way to becoming everyone’s new favourite national team. Possible bonus points to them for making CR7 cry, or slight annoyance at being denied the Messi-Ronaldo dream final, depending on what time of fan you are.

‘Nonetheless one can’t help feeling that [Brazil] will trip up in the knockout stages and exit earlier than their fans (and certainly the players) would expect to’. Maybe some of that predictor credibility can be recovered after all? The Seleção was indeed cruising along very nicely until they hit the brick wall that is Croatia and penalty shootouts. Back to hoping for next time around for them. Not much to say about the rest here, the prediction was mostly correct, although Switzerland being a ‘hidden gem’ turned out to be a tad optimistic with the schooling in football they received from Portugal in the round of 16.

There was only room for one best player in the world after all. Cristiano Ronaldo’s failure to win the World Cup at his last opportunity will sting all the more considering his forever rival did get there in the end. It was not that far away this time – ironically performing best with CR7 benched, the Portuguese were looking very strong but just could not find a way past Morocco. Ronaldo does seem to have acquired a fondness for the region though (or its money, definitely its money), as he accepted the new challenge (read: insanely lucrative contract) of Al-Nassr in Saudi Arabia, 100% definitely not contradicting his previous intentions of finishing his career at the top level. Apologies must be offered for severely underestimating the Koreans, who delivered a tiger-like performance to fight their way out of the group, denying a Uruguayan golden generation a memorable run to send Suarez, Cavani, and Godin off with.

Thus, we end with the inevitable conclusion that we all knew before – it is absolutely impossible to predict the World Cup. Its unpredictability was and always is what makes it so great, and in Qatar 2022, it led to some of the most memorable moments in recent footballing history, headlined by the greatest final any fan could’ve asked for, with a story and ending befitting a Hollywood script. Here’s to similar greatness and unforgettable moments in North America 2026!