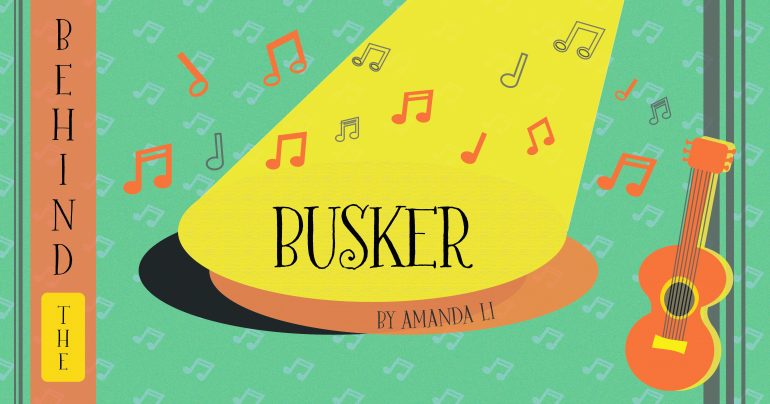 Behind the Busker: The Past with Pete

As you approach Cornmarket Street or Queens Street, you might hear the echoing twang of a guitar or the resonating notes of a violin. A group of buskers –some regulars, some popping in and out– gather on the Oxford streets to provide the background soundtrack for our walks to Pret or trips to Westgate. Some have been there only a few times to try the art out, and some, like Pete Lock, have been doing it for years.

I caught up with Pete on a misty morning while he was playing his set. I was absolutely freezing and slightly grumpy after a long night of jet lag, but my approach to Pete’s mic was filled with a clear voice and calming guitar that pierced through the chatter on the street. He had a helpful list of songs set on the ground to provide inspiration for his session and happily took a short break to speak with me, hands set in pockets. “Most of what I play is too obscure for people,” he noted. (He got me there, honestly: I get the Heardle in one second 50% of the time and have no clue what Pete was playing most times I passed him by.)

Pete had first entered the music scene in 1971 as a drummer and background singer in a long-gone band, but his experience as a lead vocalist grew when he first decided to busk every few days in 2017. His drumming days were long over, but he still loved to sing for the masses, whether in harmony or not. When I told him about my experiences in choirs and acapella groups, he brightened up. “You could sing me your shopping list in close harmony and there’d be tears in my eyes. I love it.” It was the presence of other people that made music-making more than just a casual hobby but a regular necessity.

I asked Pete about some of the other buskers he’d met during his years. He noted some of the guitarists and the violin player, but chuckled as he brought up what I personally think would be the funniest busker in Oxford if they were still there: someone who would play the bagpipes eight hours a day straight. Certainly would save me $3 from my daily coffee…

Pete was a big believer in the power of live music and its abilities to cheer people up, no matter how bad one’s day was; the pandemic exacerbated the already-declining Oxford live music scene, and we agreed that busking provided an aspect of live music that was slowly disappearing. We discussed the last live music venue of Oxford’s city centre closing  in 2020, just another one of the closures that increased unemployment in the music industry by 35%. He explained how even the response to the music has shifted since COVID: the many life stories that he’d hear and blog about from the corner gave way to occasional smiles as people passed him by. “Everyone streams music nowadays…nobody really listens to their music live like they did before.” He described how people used to attempt to follow along with the instrumentals, even if they didn’t know the song. I definitely saw the difference– in our twenty minute conversation, only one person had approached Pete, and even on my daily walks around Oxford, I seemed to be one of the few people who really interacted with the buskers.

But there was one key factor that got everyone involved: a crowd pleaser. Pete’s covers varied from obscure hits to songs that I could sing by heart. “People only really give you money if they recognize a song,” he explained.  His personal hit?  Some Leonard Cohen. “If I had twenty ‘Hallelujahs’, I could retire!” he quipped.

As a child, I loved listening to the buskers on the subway while heading to my mom’s office, and it was grounding to show up to Oxford and still be able to listen to live music with other people on the streets. Pete was a fixture of the Oxford music scene (and even some of the New York one!) that knew how live music affected people and the importance of keeping it alive.